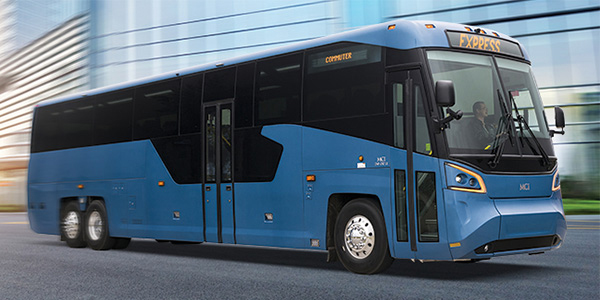 It is an epic that spans the Cold War and beyond, starts in streets behind the former Iron Curtain and then passes through the red-clay hills of Alabama on its way to the freeways and the future of Los Angeles, Phoenix and cities beyond. That’s the remarkable odyssey of Alabama-based North American Bus Industries and its parent firm back in Budapest, both of which known by the corporate acronym NABI.

NABI, a major player in the U.S. transit bus business, has won significant American contracts from Boston to Los Angeles with a huge assist from high technology, including cleaner buses that run on natural gas and significantly reduce pollution. More recently, the company has been banking on demand for a pioneering new advance called a “CompoBus” made with a lightweight, resin-based composite material that not only requires less fuel but better withstands crashes and is easier to repair.

Cliff Henke, the director of external relations for NABI, said the company’s ambitious goals include attracting new American riders who might not have considered taking buses before. “Phoenix officials have told us that they are doing that with our CompoBuses for their new ‘Rapid’ service,” he said. “Now they’re seeing lots of luxury cars in park-and-ride lots – there’s actually a new kind of rider for buses there with a new kind of luxury look,” Henke said. These newer models are designed with new types of bus service in mind – for example, riding on dedicated busways similar to light rail – and in Phoenix these buses come with cloth seats, overhead luggage racks, bike racks and reading lights.

Molotov cocktails
It’s a long way from the streets of Budapest and from a company called Ikarus, which during the height of the Cold War was a major bus supplier to the Eastern European countries that were dominated by the Soviet Union. Like other companies in the Communist world, Ikarus was state-owned.

North American Bus Industries was the vision, ironically, of a man who fled the country and Soviet repression during the bloody putdown of the Hungarian uprising in 1956. Peter Rona was just 14 years old and hurling Molotov cocktails at the Soviet tanks invading Hungary. His mother made sure he would do other things with his life, and both made their way – barely – to Washington, D.C. later that year.

Peter Rona turned out to be well suited for capitalism. He became a successful investment banker in New York. When the Berlin Wall and Communism collapsed in 1989, Rona became interested in using his own wealth and connections to help rebuild his native land, and so with the help of Wall Street’s Bear Stearns he created an investment tool called the First Hungary Fund.

Ikarus was one of a number of former state-run companies that had some or all of their assets put up for sale. The Budapest-based firm had arranged to ship bus bodies and chassis to an assembly plant in Anniston, but the owner of this American plant was also teetering on the financial brink, for different reasons during the U.S. recession of the early 1990s. In 1993, Rona and his First Hungary Fund moved to buy the critical assets from both the Hungarian and American companies.

Henke said that the company has been profitable every year except for the beginning and last year, and 2003’s setback was mostly due to a combination of the slow economy and currency issues. NABI now controls about 20 percent of the city bus market in North America.

The body-chassis “shells” for NABI’s buses are still manufactured in Budapest, and then placed on a cargo ship in Germany bound for America. When these shells arrive in Anniston, hundreds of workers install the engines and add seats, tires, and the other key components. Altogether, NABI employs more than 700 people in the U.S.

A friendlier face
Today, NABI’s North American headquarters and manufacturing facilities in Anniston include two bus assembly plants, offices and a research and development center consisting of approximately 242,200 square feet, plus related tools and equipment on a 35.8-acre site.

Its rise is an incredible story, except that the collapse of the Berlin Wall is really the beginning of the tale rather than the end. Today, NABI’s ambitious goal is nothing less than to help remake the North American bus industry’s image as an unreliable and mundane form of transportation for the masses.

In recent years, for example, NABI has worked many years and spent considerable sums of money to design its revolutionary 45-foot CompoBus so that it is more attractive and appealing to users. The shiny model that the company recently sold to the transit systems in Phoenix and Los Angeles include a friendly curve under the grill that resembles a smile. The composite structure of the CompoBus, the only such line of buses made in the world, makes such sleek design possible, while giving greater strength and crash resistance. It is also thousands of pounds lighter than a comparable steel bus and is impervious to rust and corrosion.

The overwhelming majority of the buses shipped by NABI and its competitors in recent years have been so-called low floor designs. Sparked by the Americans With Disabilities Act, low floors use ramps, a kneeling feature or a step up just a few inches above the curb for easy access. In some places, the curb height is level with the bus floor, negating the need for ramps, and certainly the need for wheelchair lifts. Also, the company estimates that natural-gas engines have powered about 60 percent of the buses it delivered in North America in recent years, an answer to the increasing environmental consciousness of cities in recent years.

But nothing has done more to put NABI on the map than the development and marketing of the CompoBus. In 2002, the firm opened a brand new construction plant in southwestern Hungary that’s strictly devoted to making the composite shells, using the technology that was first developed by a yacht maker in Rhode Island. The patented manufacturing process involves combining fiberglass, carbon fiber, foam and balsa wood, which are then hardened with a resin using a vacuum infusion.

Of course, for buses to be successful they need riders – and executives at NABI are very optimistic about a fast-growing industry concept that’s called BRT, for “bus rapid transit.” Some of these systems use dedicated lanes on interstates or across bridges to speed the commute. One project that NABI is involved with in Los Angeles is using an abandoned railroad right-of-way. Most BRT systems also use cleaner, more modern buses of the type manufactured by NABI. More importantly, the systems tend to be much less expensive to build than new light-rail systems.

“The hottest topic these days is bus rapid transit, which is taking all of the connections that you’d expect from a train – spaced stops, easy-to-read maps and schedules, dedicated lanes,” Henke said. He said that NABI will finish this summer the prototype for a 60-foot, advanced-design articulated bus that is aimed primarily at the BRT market. Industry surveys suggest that both riders and cities want futuristic-looking, higher-capacity vehicles for this new type of service, and that both the 60-BRT and CompoBus can do the job depending on the customer’s needs.

For NABI, the road ahead looks wide open.