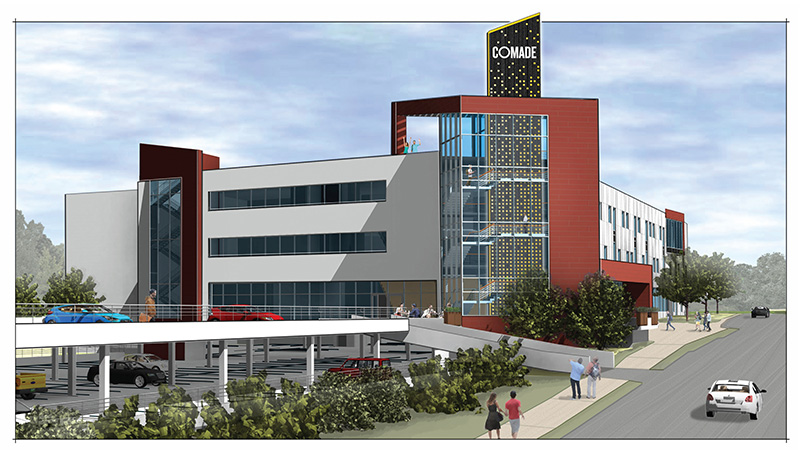 The heart of the Mid West looks set to be the birthplace of a pioneering and unique breakthrough that could not only rejuvenate urban manufacturing but also become the model for cities across the U.S. and throughout the world.

CoMADE is an ambitious $26-million project designed to bring product innovators, manufacturers and workers together in a 100,000 sq. ft. purpose-built center in the heart of Cincinnati, Ohio. It will be the first of its kind anywhere in the world and follows an intense study of more than 100 manufacturing programs across 17 cities.

The center, which is scheduled to open in the Fall of 2020, will house eight core manufacturing programs ranging from basic training to advanced additive manufacturing. Specifically, CoMADE will provide co-working space for manufacturing start-ups, a prototype and micro-factory to produce low run and test products, a manufacturing academy where businesses can learn new techniques and technologies to remain competitive, a business accelerator and incubator, tool library and workshop, community space and a suite of training programs.

CoMADE President, Rich Kiley, explained the genesis for the idea: “Manufacturing has historically been the engine of the middle class. It provided good, sustainable living wages but in recent decades we have seen some of those jobs move overseas while we have also seen a capability gap growing between the skills of US workers and the open jobs that do exist.

“Today, there are more than 400,000 open manufacturing jobs in this country and a primary reason that they remain open is because of that capability gap. CoMADE is one step towards bridging that divide by teaching workers new skills so they can secure those well-paid positions.

“We will also be offering training programs for individuals wanting to enter the manufacturing field including those returning from prison.”

Beyond the training element, CoMADE will become the destination of choice for product entrepreneurs. The center will not only provide space for them to work and collaborate but also a micro-factory where they can produce prototypes and limited production runs.

“In addition to the more than 300 that will receive training through our programs, we expect to create about 100 new manufacturing businesses over the first five years of CoMADE. That, we believe, will create upwards of 1000 new jobs,” Kiley added.

CoMADE will be set up as a not-for-profit enterprise. Start-ups will be rented space at competitive rates with discounts being offered to businesses originating from local neighborhoods or that employ local workers. Any profits generated by the center will be ploughed back into the project.

Kiley continued: “Cincinnati was the perfect location to launch this initiative. The city has a long and proud history of manufacturing and today, manufacturing still accounts for 20 percent of the region’s economy. We are also at the heart of the country’s automotive corridor and ground zero in the new field of additive manufacturing with the pioneering work being undertaken by GE Additive.

“However, we are already receiving approaches from other cities who have learned of the CoMADE initiative and are eager to see whether it can be replicated in their locations.”

The CoMADE center will be located in Cincinnati’s Uptown Innovation Corridor that is currently being developed by Uptown Consortium Inc. – an organization dedicated to the long-term sustainability and growth five of the city’s core neighborhoods – Avondale, Clifton, Corryville, University Heights and Mount Auburn.

Uptown’s President and CEO, Beth Robinson, commented: “CoMADE is a truly exciting and innovative initiative. It is a perfect complement to the work we are doing in the Uptown Innovation Corridor to regenerate growth, create employment and, perhaps most importantly, a sense of purpose and opportunity for our urban core neighborhoods.

There is no doubt in our minds that CoMADE will make a profound difference to our local economy.” There is also no doubt about the impact it will have on challenged neighborhoods like Avondale where CoMADE will be located.

Pastor K.Z. Smith leads a congregation of more than 1,300 at the Corinthian Baptist Church in the heart of Avondale.

“CoMADE is bringing new hope to our community. It will allow local men and women to learn new skills, secure living wage jobs and pull families out of poverty. The jobs it will create directly and the manufacturing jobs it will allow locals to now pursue because they have the right training will make a profound impact on the people of Avondale and surrounding neighborhoods,” he explained.

Beyond the new jobs, CoMADE’s tool library and workshop is modeled on a similar program from Baltimore that the research team studied. The tool library will allow local residents to come in, learn skills to undertake a home or community improvement project, borrow the necessary tools and get the work done.

The initiative is already attracting powerful backing in the form of its Board of Advisors. The 26-person group comprises many of the movers and shakers from the business community including former leaders at Procter & Gamble and GE alongside current leaders of PNC Bank, EnovaPremier and church organizations.

Ed Rigaud is chairman and owner of EnovaPremier, one of the largest automotive tire and wheel assembly operations in the U.S. Ed is a former Vice President at Procter & Gamble, and has been an advisor to CoMADE from its early, formative days.

“CoMADE bridges an important gap that has, unfortunately, widened in recent years. There is a wide gulf between meeting the needs of advanced manufacturers today and the skills that potential workers possess. This major shortage in skilled workers means that there are a significant number of members of our communities who are trapped in conditions of poverty because they cannot access living wage jobs, let alone build a career. CoMADE’s mission is to provide a route out of this predicament for many, many individuals and their families. The CoMADE skill-building and innovation programs are an engine of growth for the manufacturing sector – creating new businesses, new product ideas and keeping existing manufacturers current on the latest innovations, methods and practices,“ Rigaud explained.

Rigaud added: “It is worth remembering that two-thirds of manufacturers employ less than 20 people, and it is businesses of this size that are creating more than 60 percent of all the new jobs in the U.S. That is why creating opportunities for entrepreneurs to create new product businesses can be such a vital growth engine for both the local and national economy.

“Today, there is a growing discussion around the importance of “inclusive capitalism” – a concept of ensuring that capitalism is more equitable, sustainable and inclusive, providing economic opportunities for everyone in our society. If you are looking for an example of true economic inclusion beyond the theoretical, you need look no further than CoMADE,” he said.

With a target date of Fall 2020 for CoMADE to open its doors, the focus now is on raising the $26-million required to build and launch the new initiative. More than $500,000 has already been secured and discussions are now taking place with philanthropists, sponsors and foundations that have already expressed interest in the initiative.

Kiley concludes: “CoMADE is unique and it has fired the imagination of not just product entrepreneurs but also the seasoned manufacturers. Perhaps most importantly, it has energized communities who now feel that they too can benefit in real terms from an innovation economy.”

Paul Fox is a former print and broadcast journalist. He is now a business consultant and Visiting Fellow at the University of Oxford, England. He also teaches at Xavier University and Northern Kentucky University, both in the Cincinnati Region.