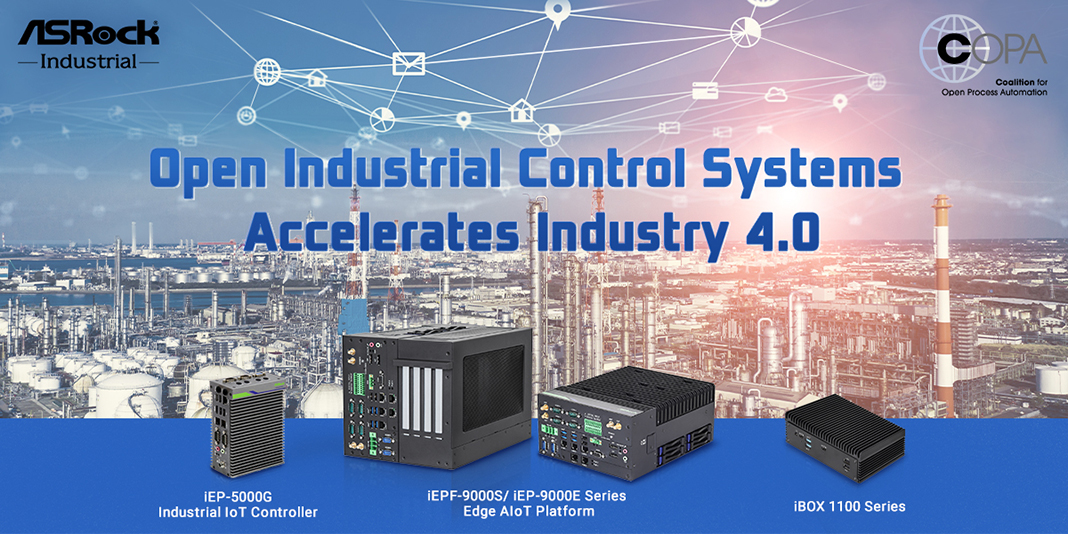 Taipei, Taiwan ASRock Industrial partners with the Coalition for Open Process Automation™ (COPA) formed by CPLANE.ai and Collaborative Systems Integration (CSI) on the development of the first open-industrial control systems based upon the Open Process Automation Standard™ (O-PAS™), increasing the competitiveness of manufacturing companies and accelerating implementation of Industry 4.0 through open platforms. The vision of COPA is to speed up the adoption of O-PAS based control systems among industrial manufacturers in diverse vertical markets. As a member of COPA, ASRock Industrial will integrate its iEPF-9000S/ iEP-9000E Series Edge AIoT Platform, iEP-5000G Industrial IoT Controller, and iBOX 1100 Series Embedded BOX PC into COPA QuickStart system. Together they will co-construct the most advanced open-industrial control systems with leading IT and OT vendors to jointly elevate the world’s leading industrial companies in their journey through operation transformation and the accelerating industrial 4.0.

“Open industrial and process automation systems now make phenomenal shifts towards higher efficiency and profitability with more open, integrated, and secure industrial control architecture that can be applied across industries. As the industrial trend moves toward further openness, ASRock Industrial can greatly collaborate with COPA partners in the creation of an open-process-automation-based system to make the manufacturing companies more efficient and competitive, more than ready for industrial 4.0 and Industrial Internet of Things (IIoT),” says James Lee, President of ASRock Industrial.

“Industrial automation is one of the largest markets that has yet to embrace modern IT technologies due to the prevalence of proprietary industrial control systems. This has led to significant vulnerabilities to cyber threats and to missed opportunities to implement productivity enhancing software. COPA was created by leading IT and OT vendors to address this market need with open-architecture systems based upon open standards. With an industrial computing leader like ASRock Industrial, the COPA system is able to implement far more advanced control strategies, pervasive cybersecurity detection and prevention, and predictive maintenance analytics deep within the control system architecture,” says Bob Hagenau, CEO of Silicon Valley software company, CPLANE.ai.

ABOUT ASROCK INDUSTRIAL
ASRock Industrial Computer Corporation was established as an independent company in July 2018, focusing on the fields of motherboards, edge computers, and other products for the manufacturing, business, and retail industries. It is the world’s leader in Industrial PC motherboards, with customers located around the globe. Previously, it had been a business unit of ASRock Inc. (est. 2002) which was set up in 2011.

By becoming an independent company ASRock Industrial can devote all its resources to B2B activities. Our vision is to Cocreate an intelligent world, which encompasses the ASRock Industrial’s core focus in CARES (Commerce/ Automation/ Robot/ Entertainment/ Security) industries. With a central R&D design team of almost 60% of total staff, ASRock Industrial has the resources to develop reliable, leading-edge products for your business needs. All products can be bought off-the-shelf or customized to the demands of OEMs/ODMs.