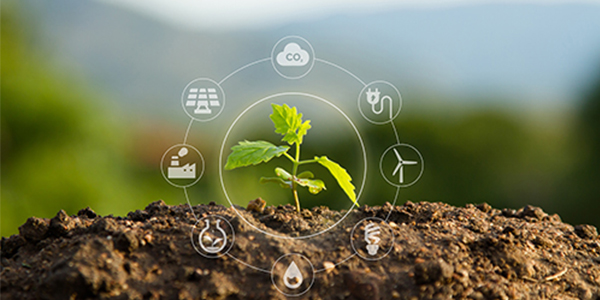 The more you know about EQ – The Environ-mental Quality Company, the clearer it is that a clean environment is good for business and the two are not mutually exclusive.

In every step of the company’s growth over the past 50 years, EQ – The Environmental Quality Company, Wayne, Mich., has anticipated, met, and often exceeded the evolving environmental needs of industry and regulatory agencies.

The company has an interesting beginning. Founded by the late Michael Ferrantino Sr., the company was originally a mining, sand and gravel business serving sewer systems in and around Detroit and its suburbs. He noticed an opportunity to convert the excavated areas into clay-lined landfills and accept municipal waste and the landfill business was born,” reflects Daniel Gilbert, director of corporate communications.

The landfill business continued and expanded, adding capabilities for industrial waste. The company eventually got into the business of solidifying industrial and municipal sludges to prepare these for disposal. “We were well positioned in the late 70s early 80s when the Resource Conservation and Recovery Act (RCRA) was promulgated,” Gilbert says of the landmark U.S. environmental regulations that gave rise to the nation’s hazardous waste industry. “We shifted gears and got into the technologically advanced hazardous waste business with a construction and engineering department. We pioneered the concept of HDPE plastic landfill liners even prior to it becoming regulation, as well as took advantage of harnessing methane gas to convert it to energy.”

The original solidification plant was replaced with a larger, state-of-the-art treatment and solidification facility. Other specialized lines of contracting and recycling also came to fruition as regulations and practices evolved.

The founder died in 1984, his heirs purchased the company and operated it until 1997 when Michael Ferrantino, Jr. and other executives purchased and realigned the company.

“We divested our solid waste assets at that point and focused on the industrial and hazardous waste side,” Gilbert says. “Customers were demanding more services and fewer vendors so, if we wanted to continue to have control of our destiny, we needed to offer additional services.”

In 1997, the company started the EQ Site Services Division to assist customers in industrial and municipal sectors with on-site remediation, specialty waste handling, and transportation services. A full range of other services followed. “We always kept that entrepreneurial spirit and opportunistic focus. If a customer came to us and with a need for a new service, we would pursue it.”

That posture serves the company well to this day because of the trend toward consolidation in the waste management industry.

Airport Business Takes Off
A perfect example of this broadly competent company meeting a specialized new need is EQ – The Environmental Quality Company’s de-icing fluid recycling business. EQ is the largest recycler of spent aircraft de-icing fluid in the world. Contracts include Detroit Metropolitan Airport, Pittsburgh International Airport, and Salt Lake City International Airport. “Until we started doing it, there were few options for airports. Traditionally, they sprayed the planes and let the de-icing material drain into sewers and the surrounding environment,” Gilbert explains.” In the mid-1990s, the EPA mandated that airports develop material management plans to manage that material more responsibly.

“We gave the airports an outlet for the deicing fluids and they eventually developed centralized de-icing pads instead of spraying the fluid at the tarmac or runway. Now, planes go to the concave pad for de-icing and, as the material runs off the plane, it is collected in a blind sump holding tank. We pump that out, remove the water and recycle the propylene glycol base.” Guess what? Turns out that propylene glycol is a very valuable chemical. While environmentalists don’t want it leaching into the ground, business people don’t want it wasted either.

The chemical is used to make many consumer items such as paint and plastics. “We recover that material and sell it to industrial users,” Gilbert says. “That’s what makes the economic business model work. We do charge our airport customers a fee for collecting and managing the material but if that were our only revenue stream, it would not be economically feasible. Selling the recovered material is what makes it a profitable enterprise for us. It’s a win-win for the airport because they not only keep that material out of the surrounding environment, they are also saving money in wastewater treatment surcharges. Before we started collecting and processing the material it would generally go to the local sewer system and they would have to manage it. So this is a good business model for them and for us.”

From Landfill to Full Service
The new ownership group reoriented the business beyond its concentration solely on the disposal end of the pipeline. Today, EQ – The Environmental Quality Company emphasizes services and facilities management. Since 1997, revenues have soared from about $40 million to about $200 million and the company grew from about 150 to 600 employees. Most of the company’s sales today are from services rather than the disposal facilities.

EQ – The Environmental Quality Company has several facilities through the U.S. The company’s service centers are in Michigan, Ohio, Indiana, Massachusetts, Florida, New Jersey and Georgia. There, waste is prepared for treatment and recycling. Other facilities for treatment, storage and disposal of industrial and hazardous waste are in the metro Detroit area as well as North Carolina and Florida.

EQ – The Environmental Quality Company continues to add services to meet customer needs. “The big driver now is cost control. A lot of customers in global markets are competing against companies in other parts of the world that don’t have our strict environmental controls and associated costs, so they watch every dollar,” Gilbert stresses. “They want innovative solutions and liability protection. They want to take things out of a landfill and reuse and recycle that material whenever possible while avoiding long-term liability.

The company meets that need in a number of ways. Its resource management group enters an industrial facility and can manage all the waste streams and byproducts for a fixed annual fee. “We focus on ‘Reduce, Reuse, Recycle,’ ” he said of the three R’s of the industry. “We work with the customer in partnership to reduce their costs over time through innovation, efficiency and continuous improvement.”

As a result of these efforts and approaches, EQ – The Environmental Quality Company has also become one of the top solvent recycling companies in North America. Customers include automakers, machine manufacturers and consumer products companies that produce toys and recreational equipment. “They all paint whatever they manufacture and often use multiple colors, running paint-purge solvents through their lines to clean in between color applications,” Gilbert says. “Traditionally those solvents, with high BTU values, were disposed by burning in an incinerator or cement kiln. We take that material and run it through a recycling process to remove physical and chemical contaminants. We get it back to a nearly pure product that can be reused instead of disposed. So it’s a very sustainable practice to use the solvent purge materials.”

He notes that customers want to continue to use solvent purge materials because they are more effective at cleaning paint lines than a water-based purge process. “We allow them to achieve maximum efficiency and save about 33 percent over the costs of buying virgin solvents.” Once again, economy and ecology go hand in hand.

“Anything that’s in widespread use and is greater than a pilot project must really support itself environmentally,” Gilbert suggests. “We just don’t have the closed or isolated markets that we had 30 years ago. Companies can’t afford to do things purely for environmental benefit, they are under too much economic pressure. They want to be green and do what’s right, but they also need to come up with solutions that make it financially feasible to meet regulatory requirements and be a steward of the environment.”