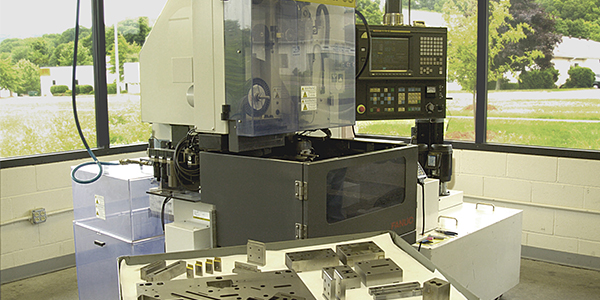 Lyons Tool and Die Company has just unveiled its new Web site. While the method of promoting the company’s services may have changed since 1951 when the company was founded by the Lyons family, the commitment to providing the highest quality services has not.

The Connecticut-based company’s team of in-house engineers is equipped with the latest in CAD technology and is ready to assist clients from the product development stage all the way through the production stage. Lyons’ rapid prototyping services involve minimal or no tool costs coupled with short lead times. The company can even undertake rapid parts revisions for its prototypes that can be completed in hours instead of days.

Product design assistance, contract manufacturing, engineering services, prototyping and the other services mentioned above form the basis of the company’s powerful project management capabilities. Lyons can manage entire projects from design to shipping. “We can really add value to a company’s product development because we can get involved from the product idea stage right through to shipping,” says Will Lyons, the company’s vice president. “We place an emphasis on coming onboard during the earliest stages of a product’s development.” In addition, customers are drawn to Lyons because it has the ability to ship anywhere in the world.

Strength Through Diversity
Lyons’ success over the years can be attributed in large part to the diversity of industries it serves. The medical, communications, computer, automotive, electronic switch, electrical, hardware, appliance, motor lamination, aerospace and other industries all rely on Lyons for the finest in manufacturing services. According to Lyons, the company expects to generate growth from all of the industries it serves. “Growth should be pretty consistent across the board,” says Lyons, “and we are finding that many major medical companies are interested in our ability to contribute to their product design and development.”

New Projects
Recently, Lyons has been involved with new and interesting projects that highlight the company’s myriad capabilities. In one project, the company has taken on a substantial transfer of stamping and assembly for a large industrial concern. The customer transferred a portion of one of its stamping and assembly divisions to Lyons, and Lyons was able to initiate production in just two days.

In general, Lyons handles a major transfer of stamping equipment, tools and assembly equipment at least once per year. In these particular cases, Lyons manages the entire manufacturing process for its customers. A third project Lyons recently has been a part of revolves around the design and production of an innovative new tool for the manufacture of architectural hardware. “The groundbreaking tool is CAM programmable and can actually make 10 different products without major adjustments,” explains Lyons. Lyons also contracted the design and manufacture of special custom-made equipment in order to accommodate production of the new tool.

Finding solutions to manufacturing challenges is the company’s strength. In many instances, potential clients send to Lyons a part they’re having problems with from either a production or performance standpoint. Lyons is tasked with finding a better way to manufacture the product or a way to eliminate or, at a minimum, reduce performance difficulties. Recent products in this area include industrial gauges. Finally, Lyons is working on a number of different assemblies and subassemblies for several clients.

In November 2001 Lyons moved to a brand new, 32,000-square-foot facility in Meriden, Conn. The new site represents the fourth building the company has occupied in its more than half century of existence. Lyons has an additional 15,000 square feet of manufacturing space available in Meriden.

From the beginning, the company has always had a diverse group of customers. In the company’s early days, it manufactured tooling and dies for Connecticut Telephone and Electric. In the 1950s, Lyons also made dies for the production of Christmas ornaments as well as dies for Boy Scout buckles. “We made the dies that were used in the manufacture of caps which were fitted onto Christmas tree ornaments,” says Lyons. An early customer also included the military, for which it manufactured shell holders.

The Lyons family emphasizes internal growth over acquisition-led growth at the moment; “however, that’s not to say we won’t expand through acquisitions if it made sense from a strategic standpoint,” explains Lyons.

Lyons Pride
The company understands that its customers represent its future. As such it is committed to doing whatever it takes to help increase their profitability through cost reduction and process improvement. As part of this effort, Lyons has instituted a continuous improvement program known as Lyons Pride. The program is meant to maximize internal efficiencies.

“Every month we take a specific process and find ways to eliminate any waste,” explains Lyons. “These on-going improvements translate into savings for our customers. Being able to offer price reductions to our customers is key.”

A good indication of the company’s success in eliminating redundancies and reducing costs is its ability to attract projects that would otherwise have gone overseas. “We’ve recently been awarded a project that was set to go over to a Chinese competitor,” notes Lyons. Lyons’ ability to compete at a global level is just one more qualification the company has added to its already impressive resume.