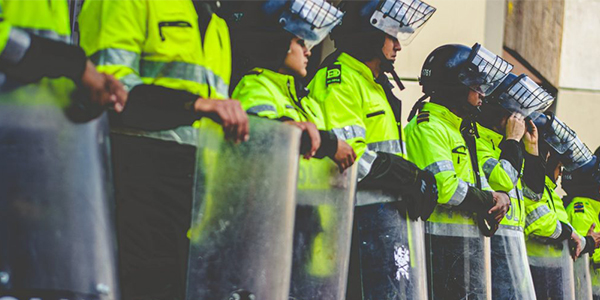 Before Iraq, before Afghanistan, and before Bosnia, there was southern Africa. Garth Barrett was on the front lines in that region for more than two decades, as a colonel in the Special Forces for the nation then known as Rhodesia, now called Zimbabwe. And much of his efforts went into combating land mines.

“Mine warfare is a game of chess,” says Barrett, who saw land mines increasingly used as the weapon of choice by anti-government rebels not just in his country but also in neighboring states such as Angola, Mozambique, Namibia, and South Africa.

Today, Barrett is based in America, and he’s putting that technology to commercial use in his role as president of Technical Solutions Group, Inc., (TSG) which is the world’s most advanced manufacturer of landmine- and ballistic-protected vehicles.

When Barrett and TSG set up shop here nearly a decade ago, protection from land mines was not a priority for the U.S. military, which saw the use of the low-tech explosive devices as an issue for obscure Third World guerilla wars. But that thinking changed dramatically with the terrorist attacks of Sept. 11, 2001, and ensuing U.S. war on terrorism, with one large order from the U.S. Army for mine-detection/clearance vehicles and with more likely.

The reality of war
“Unfortunately, war seems to be a permanent problem,” says Barrett, who joined the military in Rhodesia back in 1964. Speaking specifically on the war on terror, he added: “This is a serious ideological conflict. It’s not a limited war, but a global conflict. A lot of people don’t want to hear that, but that’s the reality.”

Indeed, it’s only been in recent years that the world has begun to grasp how serious the problem of land mines has become. A re-port in the late 1990s found that every 22 minutes a land mine explodes, maiming or killing 26,000 people a year. Most victims are not soldiers but women and children who happen to live in areas that were once war zones. The U.S. State Department recently estimated there are some 80 million land mines in 60 countries around the globe. The largest numbers are in Afghanistan, Angola, and Iraq.

But the roots of the problem were in southern Africa. “Land mine warfare became the main tool of guerilla fighters,” Barrett recalls. Rebel forces often obtained the explosive devices from the former Soviet Union and its allies and planted them along key roadways on the theory that the government couldn’t control remote areas if their troops couldn’t get there.

Initial solutions were low-tech but effective – placing sandbags and conveyor belts inside military personnel carriers, which would absorb explosive fragments and blasts.

That’s where the chess game came into play. The rebels turned to more sophisticated mines, including trigger-based devices that explode under the center of the vehicle and “triple-stacking” land mines. To combat these, the Rhodesian military worked with scientists from the CSIR to develop heavy metal capsules for moving troops and civilian personnel. The South Africans would later develop special patented plates to combat self-forming fragment mines.

By the early 1990s, the major conflicts in that region of Africa had wound down. However, the United States and its allies were becoming increasingly involved in peacekeeping missions in places like the former Yugoslavia where land mines were still rampant. Ten years ago, Barrett relocated to America and established Technical Solutions Group, or TSG in early 1997, to build land mine- and ballistics-resistant vehicles. Initially located in California, the firm moved to Charleston, S.C., in the late 1990s to take advantage of heavy-lift cranes in the realigned Navy shipyard and nearby metal shops. It now employs about 50 people.

Although much of the company’s early work was experimental, it has recently landed two significant military contracts. Last year, it negotiated its first big sale to the Army, agreeing to supply 10 of its Buffalo vehicles to be used in detecting and clearing areas of land mines.

The heavy-duty trucks are part of the military’s Ground Standoff Mine Detection System. The key features of TSG’s Buffalo are a robotic arm that is used to clear mines, as well as steel wheels to operate in rough, mine-pockmarked terrain. The Army contract is worth nearly $8 million.

This year, the company completed delivery of eight of its specially designed mine-protection troop carriers – known in America as the Cougar, but called a Tempest in England – to Britain’s defense ministry. This high-speed model is outfitted with a patented metal plate directly under the passenger compartment to protect against self-forming fragment mines. The Rhino is a light-armored combat vehicle with triple land mine protection and a concealed remote turret.

‘VIP protection’
The firm is developing several other models. One, called the Lion, is a smaller mine- and ballistic-protected vehicle that is marketed as “VIP protection” for high-ranking government officials or for private customers. Its new Iguana is an amphibious all-terrain vehicle with a top speed of 65 mph that can be deployed from the V-22 tilt-rotor aircraft.

TSG buys its vehicles from Peterbilt, a major truck maker, and modifies them at an 85,000-square-foot manufacturing center at Charleston’s old naval base. Prices start at $140,000, with the most sophisticated models costing upward of $500,000. The firm has also established close working relationships with neighboring Metal Trades and Charleston Marine Manufacturing Corp.

Last year, TSG was purchased by Sonic Jet Performance Inc., a California-based, publicly traded company. In August, Sonic Jet’s shareholders voted to change the name of the company to Force Protection, Inc. Barrett said the firm is likely to draw somewhere between $8-12 million in revenue this year, a figure he expects to more than double in the year ahead.

Now, American and British forces are gearing up for what looks like a lengthy occupation in Iraq, a nation that is littered with possibly millions of land mines, especially in the northern expanses of the country. The bottom line is that the need for the heavy products manufactured by TSG is not likely to let up any time in the foreseeable future.