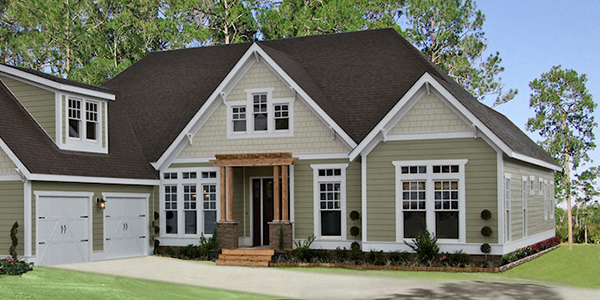 Sam Weidner Jr., the president of development for Patriot Homes, Inc., and the son of the company’s founder, said he was on a golf course in his native Indiana a few years ago when he was struck by lightning – in the form of an idea. He met an older couple that asked him what he did for a living, and when he told them he was an executive for a company that built manufactured homes, they said: “You build trailers?”

“We prefer not to call them trailers,” Weidner recalled saying, and as he started to tell them about the business, the older man and woman interrupted him. They said they’d almost bought a manufactured home 30 years ago, and when they’d retired recently they briefly considered it again. But they never even checked out the interiors of the homes, because, they said, they’d seen it all three decades earlier. The comment miffed Weidner, whose industry leading company had made significant advances in upgrading the interior features.

“They figured if we didn’t change the outside, than the inside must be the same,” recalled the Patriot Homes executive, who said it was then he realized that the 32-year-old company should work on exteriors that more resembled site-built homes. He said that was also the beginning of his struggle to convince his network of retailers to market the homes to more upscale buyers.

Porches and cozy interiors
Weidner’s campaign has helped to earn Patriot Homes a larger market share in a very competitive industry, and has won recognition from the industry in other ways. Last year, Patriot Homes received the Manufactured Housing Institute’s (MHI) Annual National Industry Award for “Production Manufactured Home Under 1,400 Square Feet.” The award was presented during the 2003 National Congress and Expo for Manufactured and Modular Housing, in Las Vegas. The award-winning home, The Gettysburg, includes a front porch and a cozy interior.

“We’re the best kept secret in the housing business,” said the junior Weidner. Since the company was launched by his father, Sam Weidner Sr., in 1972, the Elkhart, Ind.-based company has grown to seven factories around the nation, a division that supplies steel chassis, a retail network of more than 600 dealers, and a licensed lender and insurance agent to facilitate sales. The firm has roughly 1,200 employees and takes in about $200 million in yearly revenue, making it the eighth-largest manufactured home company in the nation.

Sam Weidner Sr. had spent five years in the business in three different capacities before he decided to launch Patriot Homes. He said his main motivation for starting his own company was seeing how poorly the other companies operated, and his dissatisfaction at the quality of the work produced. “At one place I worked, I stole all the aluminum wire they were using and wouldn’t give it back until they promised they wouldn’t use it anymore,” he said several years ago. “I wanted to do it differently.”

In 30 years, Patriot Homes has staked a claim as one of the more innovative companies in the business. The senior Weidner noted that most of competition doesn’t build panelized product, while the ones built by Patriot Homes come in sections and are put together on site. He said the company’s homes offer a lot more amenities “because we have more than one facility and we have the ability to offer a range of prices. Not everyone can afford the Lincolns. You need the Fords.”

The company started manufacturing single-section homes at a facility on a county road in Elkhart. This division, known as American Heartland, produced and shipped its landmark 25,000th home in July 2000. After, the first expansion in 1981 the plant renamed the EnergyMate Division, which manufactures sectional homes, state code modulars, Cape Cods and two story homes. Over the years, the company has acquired new plants in Texas, Alabama, and Missouri.

‘Money takes care of itself’
In 1997, the Indiana Business Journal honored Sam Weidner Sr. as one of its Entrepreneurs of the Year. He told the magazine that no entrepreneur should concentrate too much effort on the bottom-line. “Don’t go into something thinking that you’re going to make money. It’s the wrong reason,” he says. “You should have higher aspirations, and the money will take care of itself.”

The manufactured homes manufacturer has expected the late 1990s to be the beginning of its golden era, since the brand’s strongest appeals has always been to senior citizens, and the large wave of post-war baby boomers was just beginning to approach retirement age. Instead, financing and other issues challenged the industry.

“One of the biggest problems was financing,” recalled Dave Troyer, the company president. “There were quite a few people on the retail end of the business that were hungry for business and taking deals from buyers with low credit ratings – when the crunch came, that ended that.” It was difficult for builders of new houses like Patriot Homes to compete with all the bargain basement repossessed homes suddenly on the market.

But Patriot Homes was a leader in fighting the downtrend. It established its own licensed lender, Patriot Acceptance Corp, as well as an insurance group, Patriot Asset Protection Inc., in order to circumvent some of the problems that buyers were experiencing in gaining financing. But more importantly, company leaders realized that Patriot Homes and the rest of the industry would need to get away from the traditional, boxy, trailer look.

“We felt that 80 percent of the public will not even take a look at us, but now the industry is trying to reach that part of the segment,” Troyer said. “We’ve tried to branch out with more amenities.” Patriot has won several Design Excellence Awards from the Manufactured Housing Institute over the past four years.

Sam Weidner Jr. said that Patriot Homes is the only leading manufactured home company that currently has a full-time architect on its staff, which is a member of the American Institute of Architects (AIA). He said the company is meeting its goal of building stylish manufactured homes that could be placed down in a neighborhood of site-built houses and not look out of place. He also said the company is working with retailers to provide things like garages and sidewalks – amenities that have grown in popularity in the last three years.

It seems like a lot of change, but Sam Weidner Sr. says that things haven’t really changed as much as it looks. He said: “We are still family owned, still same ethics, and sense of doing things right.”