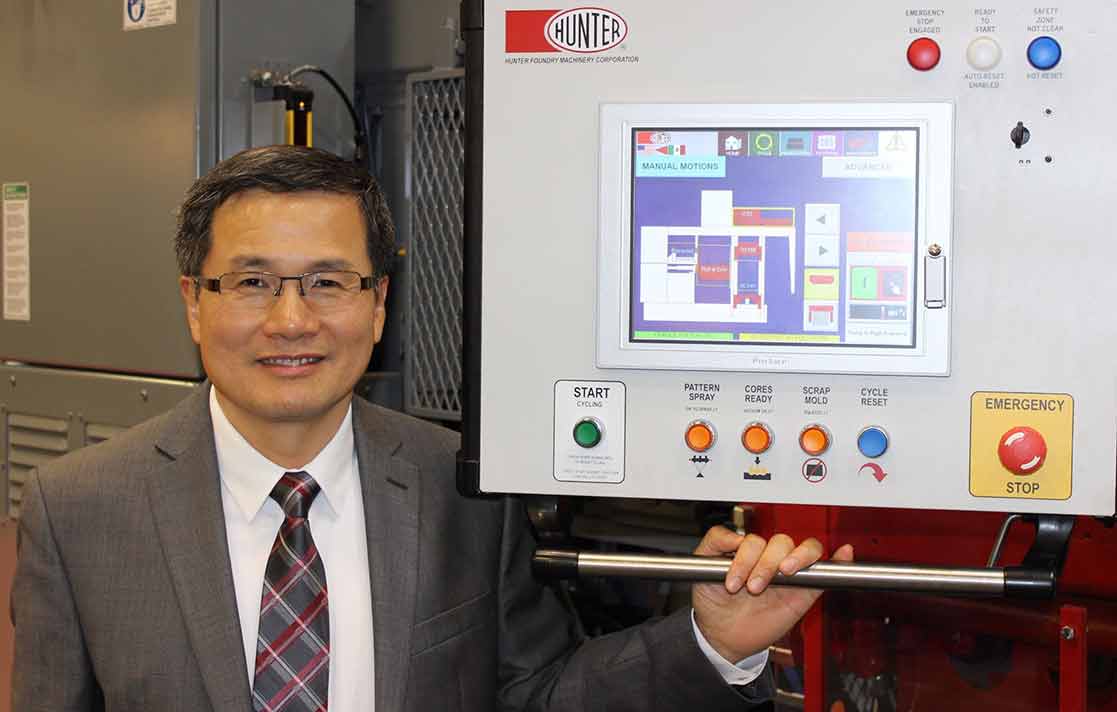 Recently Peter J. Li became the third President in the history of Hunter Foundry Machinery Corporation, a world leader in matchplate molding and sand casting technology.  The announcement was made by Chairman of Board Bill Hunter at the company headquarters in Schaumburg, Illinois, near Chicago.

Peter joined Hunter in May, 1996 as a sales engineer. He was promoted to Regional Sales Manager Asia Pacific in 1998. In the year 2000, he became General Manager of Hunter Shanghai; in 2016 he was promoted to Managing Director, International.  This history totals 25 years at Hunter, mainly in executive level positions.

Peter graduated from Shanghai Jiaotong University with a B.S. in Foundry Engineering. He then obtained an M.S. in Mechanical Engineering at Oklahoma State University; spent three years in the PhD Metallurgical Program at the University of Alabama, where, by coincidence, the very first Hunter molding machine was donated for that institution’s foundry education programs.

Before joining Hunter, Peter worked for Presto Castings as a metallurgist in Phoenix, Arizona.

Peter comments, “When I first encountered a Hunter machine, I quickly realized it had a unique and very practical labor-saving aspect and this fact was a big reason for its success in the global foundry market.”  Li knew the reputation of the company’s founder, Al Hunter, as well as Bill Hunter, the two men who preceded him as President of the company.

Li further observes, “Our challenge for the future is to keep an open mind and remove restrictions on our thinking about the foundry business.  The most successful companies in our industry have automated and that bodes well for Hunter matchplate molding machinery, automated mold handling equipment and the advanced software we bring to our customers worldwide.”  He also commented that his combination of sales, technical experience and corporate management at Hunter, both in America and at the Shanghai plant the company operates, have given him a perspective on the company and the market that will serve him well in his new role as President of Hunter.  “I do consider myself a people person and I believe that remains an important element in our relationship with the foundry business, Li added.”

Hunter is a global force in the foundry business, with an installed base in nearly every industrialized country in the world.  In addition to the manufacturing locations in Chicago and Shanghai, Hunter has a worldwide network of sales agents.

The company was founded in 1964 by Al Hunter, who pioneered the automated matchplate molding machine concept and held dozens of patents in the industry.  His son Bill, the current Chairman of Board, likewise developed numerous innovations in sand molding machine and mold handling equipment for the global foundry market.

In naming Peter Li the new President of Hunter, Bill commented, “Peter is exceptionally qualified for this position and we know he will lead Hunter into a bright and prosperous future.  We have a great team of people at Hunter and, under Peter’s leadership, I am certain the company will move forward in a positive direction.”