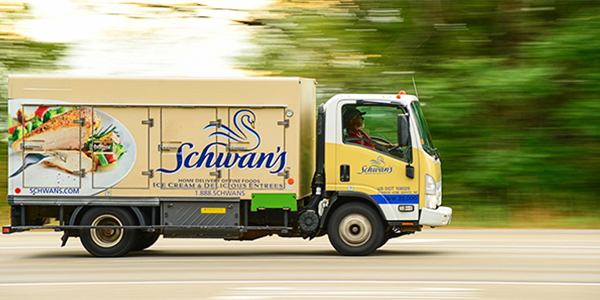 Marvin Schwan was trying to keep the family dairy business afloat in 1952. A government price freeze on milk made maintaining the small Schwan dairy in Marshall, Minn., a constant struggle. So 22-year-old Marvin packed 14 gallons of ice cream into his Dodge panel van and sold it door-to-door to farmers in the next county.

Now, more than a half-century later, the Schwan name is recognized in communities across the contiguous United States where the company’s beloved trucks still deliver ice cream – and more than 300 other premium frozen foods – directly to people’s homes. But this company has expanded far beyond its small-town roots. The Schwan Food Company, headquartered on the original Schwan Dairy site in Marshall, is a giant in the international frozen food industry.

Those impressive figures and annual sales of more than $3 billion are not enough to make this company complacent. In fact, at the end of 2002, President and CEO M. Lenny Pippin pledged to double the company’s sales – to $6 billion – within five years, a daunting task but one not without precedent at Schwan.

“In my career here, I have seen sales double twice before,” says Michael Ziebell, chief marketing officer and a 20-year veteran of the company.

Millions of suburban and rural households throughout the “lower 48” states shop for food at home with the help of their familiar Schwan representative. More than 8,000 pale yellow freezer trucks equipped with the latest global positioning technology and stocked with frozen snacks, beverages, desserts, and nutritious breakfast, lunch and dinner options regularly visit customers’ homes.

The trucks are stocked from a network of more than 500 depots across the country. The newest of these local distribution warehouses contain computerized systems for custom-loading each truck from freezers maintained at -20º F. As the company adds depots, Schwan is slowly shifting towards a “hub and spoke” distribution system. Making distribution even more efficient is Schwan’s consumer Web site – www.schwans.com – launched in 1997 to accept customers’ orders online for delivery during their sales representative’s next visit.

Building on its international success, Schwan introduced Chicago Town pasta dishes in France in 1996, and rolled out Chicago Town and Freschetta pizzas in Germany in 1998. Ziebell said Schwan brands are starting to appear in eastern European countries and to a smaller extent in South America. The company is studying markets in Asia for future growth.

Institutional Supplier
Schwan’s Food Service Group owes its existence in part to the 1970s’ fuel crisis. Recognizing that Schwan’s home delivery and retail services were heavily dependent on their energy-intense route systems, managers sought other business channels that were less fuel-focused. Marvin Schwan, sensing an untapped opportunity, approached the U.S. government about its surplus of commodity cheese. With it, the company would manufacture pizzas to be sold at discount to America’s schools.

The plan succeeded, and a variety of Schwan’s foods today are distributed to non-commercial institutions such as schools, health care facilities and prisons, plus chain restaurants that include Perkins® and Denny’s® restaurants, convenience stores and delis.

Plant Life
Schwan’s Food Manufacturing facilities – some located in the central U.S. to be close to ingredient sources, and many in the eastern half of the country near the largest concentrations of consumers – range in size from small and specialized to record-shattering. Schwan’s 450,000-square-foot plant in Salina, Kan., is the largest frozen-pizza manufacturing facility on Earth, and the 200,000-square-foot facility in Pasadena, Texas, is the world’s biggest egg-roll manufacturing site, with both hand- and mechanical-rolling lines.

Today, many technologies and services that Schwan first acquired to support its businesses are offered to customers in the food service, insurance, government and automotive industries through Schwan’s Technology Group. These include insurance underwriting data services, call centers, restaurant equipment manufacturing, and propane fuel-injection conversion systems for gasoline vehicles.

Ziebell admits the company is not “recession-proof,” noting that American consumers have responded to recent economic conditions by eating out less often and “trading down” in restaurants while continuing to buy frozen pizza as a quick, affordable meal replacement. The consumer packaged-goods segment is most likely to lead growth, he predicts.

But how will the Schwan Food Company achieve its ambitious five-year sales goal in today’s challenging economic conditions? For inspiration, managers need only remember their founder, Marvin Schwan, who turned apparently insurmountable obstacles like a government price freeze and a fuel crisis into business gold.