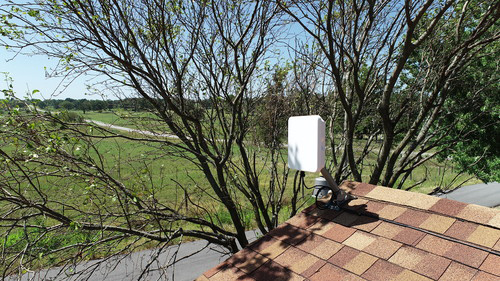 NMSURF deploys a new broadband fixed wireless technology in Santa Fe that has the potential to solve the digital divide in New Mexico.

Santa Fe: NMSurf, Inc. has recently deployed a groundbreaking new fixed broadband wireless technology, that the President of NMSurf, Mr. Albert Catanach, believes will solve New Mexico’s digital divide for a fraction of the cost. “The FCCs minimum requirement for broadband is 100Mbps by 25Mpbs, which is very hard to achieve in many rural areas; however, with this new technology that employs non-line of sight technology, interference cancellation, and many other astounding features within a 3 Mile Radius for non-LOS (non-line of sight) and up to 18 Miles for LOS (line of sight) with greater speeds, we believe this is the solution for deploying fast affordable broadband to all New Mexicans,” states Mr. Catanach. Mr. Catanach goes on to say that “This new fixed wireless technology is a re-design of how fixed wireless works. Because of its autonomous, adaptive co-channel interference cancellation algorithms, distributed massive MIMO (multiple input multiple output), precise digital beam and null forming, closed-loop beamforming adaptation, and 3D equalization, it will mean faster deployments, greater range, higher data rates, better performance in both NLOS & LOS links and with interference immunity.” It has been said by some industry experts in New Mexico that to bridge the digital divide in New Mexico would cost billions of dollars utilizing fiber technology; however, with this new technology, Mr. Catanach estimates that it would be a fraction of that cost. Real-world tests of the technology in Santa Fe have yielded between 100-400Mbps with non-LOS links between 2-3 miles and 600Mbps with LOS links at greater than 3 miles. There are also plans to release a software upgrade next year, which will be three times as fast as currently provided. NMSurf currently offers the service in Santa Fe city limits, with plans to expand more in Santa Fe county this year and other markets served. For more information on our new broadband service, please visit: https://www.nmsurf.com/broadband-service/