Right, On time, Every time.” That’s the motto of Central States Manufacturing Inc., an employee-owned and operated steel company that prides itself on its operational efficiency and production accuracy in producing and providing panels for commercial, residential, and architectural customers throughout the central United States.
Started in a small garage in Rogers, Ark., nearly 20 years ago, Central States Manufacturing hoped to fulfill a perceived need in the metal industry. “Back in the late 1980s, the entire metal industry was full truck loads,” says Adam Haynes, Marketing Director. “You had to order in large stock quantities, and we saw the need to order in smaller loads. People wanted to order one building at a time. By fulfilling that need, the lumber yards didn’t need to stock every product in every color. They could call and order one building or roof at a time.”

RULING TERRITORIES
The concept of ordering a single building or roof at a time caught on quickly. Central States Manufacturing soon outgrew its space and moved the sales and production facilities to Lowell, Ark., expanding over time to its current size of 123,000 square feet plus additional office space. The facility also contains a self-storage division called Central Storage Works, which specializes in complete mini storage packages, boat storage and RV storage buildings. Other manufacturing facilities have since opened in Michigan City, Ind.; Cedar Hill, Texas; and Jasper, Ala., all strategically located next to steel mills to help supply chain management and to enable Central States to obtain better priced supplies for the manufacturing facilities.

The Jasper market is a mixture of commercial and light gauge business. “The Jasper market is our opportunity to grow toward the East Coast,” says Haynes. “Our mission is to be the best metal component supplier east of the Rockies, and now we are trying to grow out toward the oceans – maybe toward Georgia and the Carolinas through acquisition or start-ups.”

Although Haynes is quick to point out that Central States Manufacturing is still a very small player in the market in comparison to the companies that cover nationwide building components, he stresses that Central States is very successful in the territories it covers. “We compete well against the large companies, but we are finding that there are pockets of our territories that have small, regional roll formers [machines used to manufacturer steel products] opening to serve customers within 100 miles of themselves. This is where our frequent delivery and short lead time help us compete.

FORMULA FOR SUCCESS
What sets Central Steel Manufacturing apart from its competitors? It’s simple. Central Steel manufactures everything in-house and has an average turn-around time of two to three days in an industry with a standard of up to two weeks. “Our business is made on quick turn-around time,” says Haynes. “Our largest customers have next day service. Order by 3:00 and we deliver the order the next day.”

Operational efficiency is another way Central States sets itself apart from its competitors. “We don’t make mistakes, and that has allowed us to get a strong hold in the market,” says Haynes. “Twenty years ago, mistakes in the industry were the norm and the results were low quality products and poor service. We came along and gave them a better product and didn’t make mistakes.”

All of Central States’ products are checked for accuracy to make certain all the pieces are enclosed, the product is the right gauge, correct weight, etc. In addition, although the roll former requires only two people to operate, a third person is hired whose sole responsibility is to inspect the material coming out of the roll former and to make ensure the pieces are correct and up to Central States’ standards.

Central States also employs a software system that permits its customers to order panels from their location via computer. This information is transmitted directly to a salesperson, checked for accuracy, and forwarded to the rollformer. “Customers love it because they don’t have to wait for us to fax things back,” says Haynes. “It also cuts down mistakes. We build our processes to maintain a high level of accuracy.”

Central States also uses in-house drives for its trucks as opposed to hiring drivers not employed by the company like many of its competitors. “The customer sees the same driver every single week,” says Haynes. “And the driver is more careful with the load, making certain not to slide it”. He also watches the load while it is unloaded to make sure it is not damaged in the process. “Many of our truck drivers have such a relationship with our customers that they are allowed to drop off their order without the customer being present. The level of trust that exists between the customer and our company is what makes us stand out in the market.”
Lastly, Central States produces a better product than its competitors, explains Haynes. “We roll a Galvalume substrate while the majority of the industry rolls a galvanized substrate.” Galvalume substrate has two to four times the corrosion resistance of galvanized steel. And all of Central States’ products with a Galvalume substrate come with an additional 20 year warranty. “We also roll a 0.15-inch panel while the rest of the industry rolls 0.142 inches, which is a thinner product. And, we use a 43-inch-wide coil on our R-panel, while the industry standard is a 42.5-inch-wide coil, so our panel gives more coverage to prevent leaking. Our product quality allows us to maintain a competitive edge on the industry.

EMPLOYEE OWNERSHIP MAKES A DIFFERENCE
Thirty-seven percent of Central States Manufacturing is employee owned. Why is this important to Central States’ success? “We retain employees longer and the employees are happier,” says Haynes. “As far as the customer is concerned, they get a person that cares about them on the other end of the phone because that employee knows that his performance affects his stock and retirement contribution at the end of the year.”

This high level of investment reveals itself in all aspects of the business, including customer service, manufacturing, product quality and control, order service, sales, and delivery. And it is this level of commitment and excellence that makes Central States Manufacturing Inc. a leader in its field. 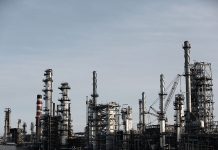