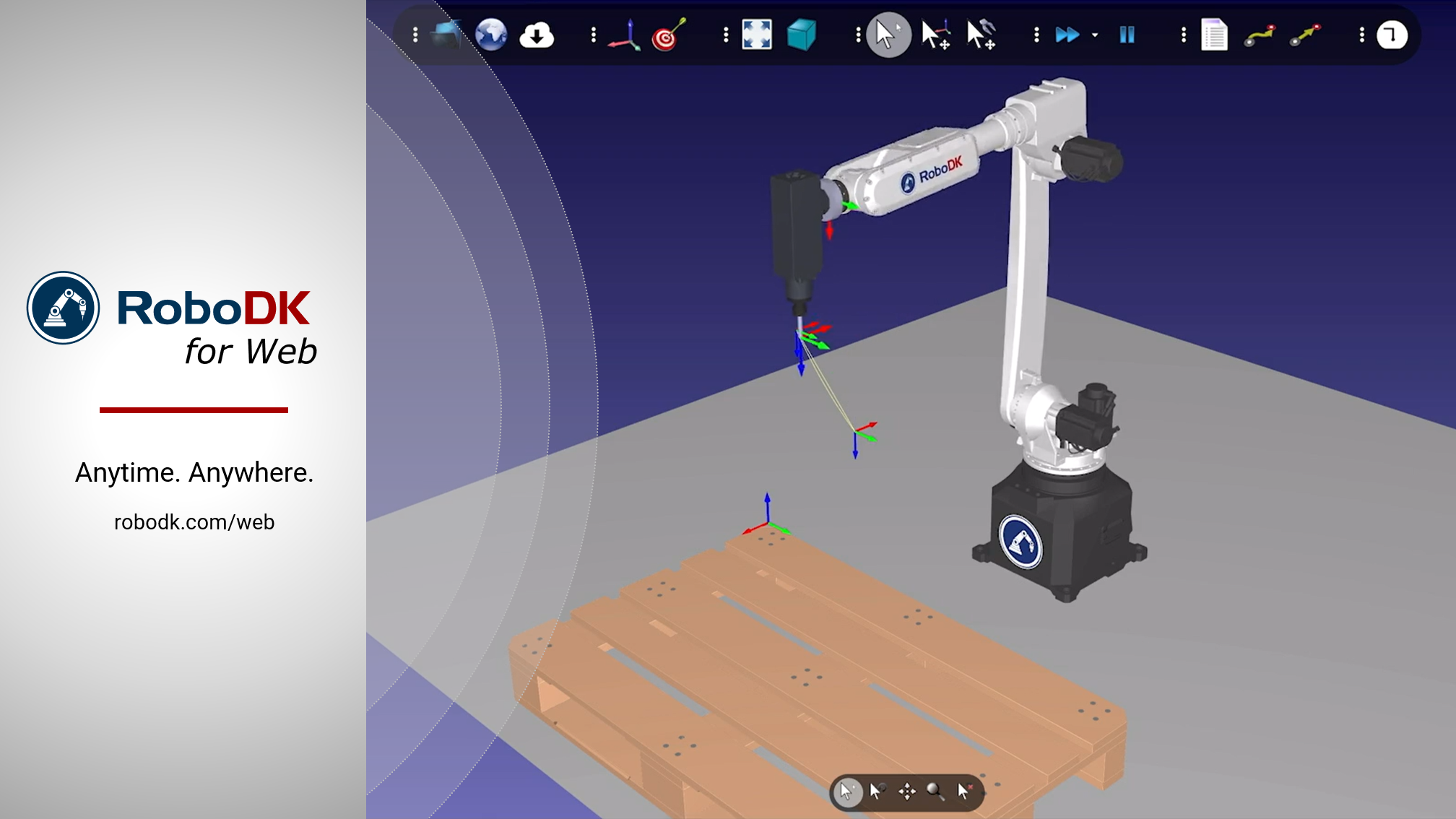 A new web version has just been released of RoboDK, the popular robot programming software. This simplified version needs no license.

A new web version has just been released of RoboDK, the popular robot programming software. This simplified version needs no license and provides a portable, simplified interface for sales representatives, new robot users, and educational uses.

Creating convincing sales demos of robotic solutions is not always easy. Robot integrators often use simulations to make it easier for clients to understand their solutions, but such simulations are not easily portable.

RoboDK is a Canadian provider of robotics software dedicated to making the task of programming as simple as possible.

With the new web version, users can access RoboDK directly from their browser.

The need to simplify robotic simulations and programming

New users of industrial robots are often confronted by a steep learning curve. Despite robotic platforms becoming more accessible in recent years, programming remains one of the most challenging aspects of any robot deployment.

Even though RoboDK’s offline programming software is already simpler than many of the alternatives, the company recognizes that the learning curve is steep for some new users.

Flore Cachera, Head of Marketing at RoboDK, explains “Getting started with new software can sometimes be daunting. The web version of RoboDK is very basic so that every user can get familiar with the environment. Our goal is to make the software more accessible and provide a global vision of what RoboDK can offer in just a few clicks.”

A convenient tool for evaluation, demos, and proof of concepts

RoboDK for Web has some compelling use cases. For example, some users need to submit an IT request to install the desktop version of RoboDK for evaluation. Now, they can test RoboDK’s core functionalities quickly and easily with no installation needed.

Another exciting use case is sales demos. Integrators can submit their simulations online using RoboDK for Desktop. Their clients simply type a custom web address into any browser and the simulation is already pre-loaded in the web version.

Albert Nubiola, CEO of RoboDK says “RoboDK users are looking for tools to save time and that are easy to use. Of course, the Desktop version remains there and we don’t have any plans of removing it.”

Nubiola describes another compelling use case — creating quick, simple proof of concept simulations in your browser.

“Many companies want to increase their level of automation with robots but they don’t know where to start. Our mission is to facilitate the transition towards automation and we are proud to be part of this change.

“RoboDK for Web helps to start creating your proof of concept by offering a minimum set of functionalities provided at no cost.”

The web version of RoboDK is cross-platform and can be accessed from anywhere that has an internet connection. It is supported by all major web browsers, including Google Chrome, Firefox, and Safari. It also supports a range of 3D model and machining files, such as STEP, IGES, G-Code, APT, and many more.

How to use the web version of RoboDK right now

The new web version of RoboDK is now live for anyone to use. It can be accessed via a web browser by going to the following link: robodk.com/web

The link brings the user to a pre-loaded robot simulation, from which they can access the basic functionality of the software. They can run the simulation, load a new simulation or robot, create basic robot programs, and access RoboDK’s extensive Robot Library.

“As in the desktop version, users have unlimited access to our full Robot Library. That includes over 600 robot arms from over 50 different robot manufacturers. They can also download any end-effector, cell, tracker, and any object that is available in RoboDK’s library.

“To the best of our knowledge, RoboDK offers the largest robot library on the market as it is not brand specific.”

The team at RoboDK plans to continue to grow the functionality of the web version, while still keeping it simple for new users. They are also targeting the web version at specific use cases that users have been asking for.

“Some of our customers start by doing reachability studies with RoboDK to choose their robot and check the feasibility of their project. In just a few clicks in RoboDK for Web you can start building your robotic cell and continue your project later on RoboDK for Desktop.

“Overall, the web version is ideal for quick and easy robotic station applications for demonstration or learning purposes.”

Founded by Albert Nubiola in January 2015, RoboDK is a spin-off company from the highly prestigious CoRo laboratory at ETS University in Montreal, Canada. RoboDK software is designed to bring powerful robotics simulation and programming capabilities to companies large and small and to coders and non-coders alike. Today, it supports more than 600 robots from 50 different manufacturers, including ABB, Fanuc, KUKA, Yaskawa/Motoman, Stäubli, and Universal Robots.