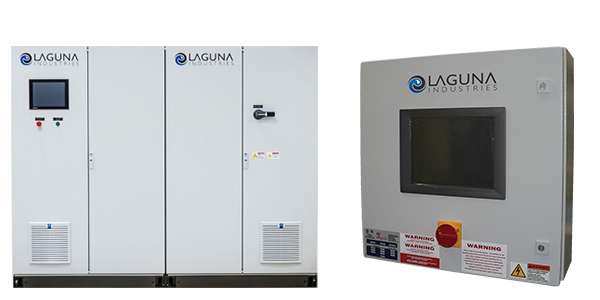 As comebacks go, this one is distinctive. An example of how a corporation lives up to its motto — “Proud Past, Bright Future” — the 17-year history of Laguna Industries, Inc. (LII), is outstanding. To look at the present: LII is a manufacturer of high-technology mobile-communications shelters used mainly by the U.S. Army and other branches of the military. According to John C. (Chris) Ahmie, president and chief executive officer, revenues for 2001 are projected at $20 million — $2 million above the original forecast. The level of funded contracts to be completed by LII over the next several years totals almost $48 million.

To view the future: LII’s revenue projection for 2002 is $30 million. However, Ahmie mentions three factors that could push that number significantly higher:
• First is the opportunity for new work. LII is involved in the final stages of contract awards, including one high-tech contract valued at $140 million for the prime contractor, with a value of $40 million to $60 million designated for LII as a subcontractor.
• Second is the prospect of a new, 20,000 square-foot government facility on the reservation. This Mobility Assessment Test Integration Center (MATIC) would be used to develop new and emerging communications technologies — specifically, radio technologies that would benefit from testing on the diverse local topography.
• Third is the use of the reservation’s exclusive rights to 36 high-capacity lines in a fiber-optic backbone that runs across the reservation. LII’s plans for the enormous bandwidth and connectivity include launching a business that will provide large database storage facilities.

To glance at the not-so-distant past: Going into 2000, sales were only $9 million, quality-control and delivery issues were apparent and the debt load was $8 million. Ahmie recalls, “It was a combination of our having some internal systems problems that prevented LII from proposing more government work.” During this period Ahmie, who had been with the company almost from the beginning, was asked to step in as interim CEO. Having worked his way up through the ranks, Ahmie accepted the challenge and abandoned his alternate plan to enroll in a professional golf instructors’ academy. What golf lost in a teacher with a 10 handicap, LII gained in the board of directors’ eventual choice for the company’s permanent president and CEO.

Strength from Within
Ahmie points out that naming a Native American to head a corporation run on a reservation and staffed mainly by Native Americans was considered a positive turning point. LII is based in a 131,002 square-foot manufacturing facility in Laguna, N.M., on the Laguna Indian Reservation, a 533,000-acre tract. Of the 238 employees, 85 percent are Native Americans.

The corporation was founded in 1982 to provide employment and economic development on the reservation after the Jackpile mine site, the world’s largest, was closed and had to be reclaimed. LII was incorporated in New Mexico in 1984, and began pursuing government business in the growing high-tech area.

The new corporation quickly became certified by the Small Business Administration (SBA) in the 8(a) program for small firms owned by socially and economically disadvantaged people. This certification gave LII entree to federal contracts designated for such businesses. Simultaneously, LII partnered with Raytheon Service Company in a mentoring program. In less than a year, the young enterprise gained a contract with the U.S. Army Communications and Electronics Command (CECOM) in New Jersey. CECOM is still a major customer, and LII maintains an office in Shrewsbury, N.J., to accommodate the work.

Front-line Products
At the heart of LII’s business ventures are the radio communications shelters — the fully equipped communications centers that fit on the back of transport vehicles. LII produces seven different types of shelters used by the military in what is known as Highly Mobile Digital Assemblage, which is part of the Digital Group Multiplexer Assembly (DGMA) program.

“These shelters are for the combat communications echelon above corps,” Ahmie says. “They house communications very close to the front lines. These command posts are critical because, in combat, communications is the heart of intelligence. We are also the prime contractor for TSM 210 shelters and the ISYSCON shelters, which are the core of the communications network and which handle signal transmission, repeaters and monitoring of other digital communications.”

Describing LII’s commitment to customer service, Ahmie says, “We support the product in its entirety, from the blueprint stage to the fielded unit. We build the shelters, produce the operation and maintenance manuals, provide technical field support and send engineers into the field to ensure that the shelters are operationally functional and optimized. We continue to support the shelters even after they are fielded, performing retrofits when necessary. We also provide expert new-equipment training in the classroom.”

Partnerships, Today and Tomorrow
Resembling LII’s highly mobile products, plans for the corporation’s future are moving the company forward in new and innovative directions. “We will maintain our relationship with General Dynamics, which helped us weather the storm and rebuild ourselves,” Ahmie says. “We’ve had ups and downs, but we both agree that this relationship couldn’t be better. Seeking other relationships like this is part of our plan.”

He recalls, “In the beginning, I hit the road to meet with CECOM and General Dynamics to discuss a strategy for upgrading our operations. With their help, we devised an action plan that resulted in major system improvements in less than 60 days. Building and running a business is about building relationships. We were extremely honest about what we could do and deliver. It worked.” Evidence of LII’s continued quality upgrading is its scheduled certification as an ISO 9002 company in the fourth quarter of 2001.

Ahmie is dedicated to the continued well-being of the people in his pueblo. “We want to lead a highly educated Native American staff,” he says. “We want the companies who do business with our community to invest in this and to know that our staff has the degrees and advanced training needed to work in a state-of-the-art facility. We want our young, educated people to be able to make a living on the reservation and not always look to the outside world for work.”