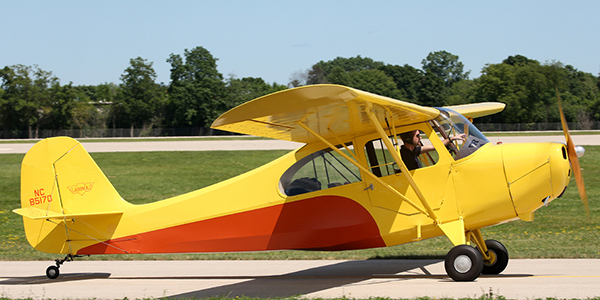 Magellan Aerospace Corporation’s Aeronca facility in Middletown, Ohio is as well known for what it takes out of an aircraft as for what it puts in. The company’s aircraft components are engineered to reduce noise, weight, and maintenance costs.”What makes Aeronca unique is our technology in the field of vacuum-brazed, acoustically treated exhaust components,” says Program Manager Keith Wyman.

To oversimplify a bit, the company makes a sort of muffler for the back end of commercial aircraft engines to quiet the exhaust noise for passengers and those on the ground in the vicinity of airports. That’s quite a challenge when you’re buffering up to 80,000 pounds of thrust.

“Our noise reduction meets stage three and stage four noise requirements, which are even more restrictive in Europe than in the U.S,” Wyman says, adding that London’s Heathrow is the most noise restrictive airport in the world. To meet these very hush-hush standards, Aeronca’s exhaust system material is designed like a honeycomb sandwich between two sheet-metal skins. “We perforate the sheet metal skins on the exhaust component so that the exhaust gas goes in one hole, through the honeycomb, and out another hole,” Wyman explains. “Instead of causing the air to move in a straight line coming off the back of the engine, this design induces a tumbling effect, which makes the engine quieter.”

Using a vacuum brazing process to join metals together and the highest quality titanium, the company’s exhaust components provide an acoustic effect while reducing the weight of the structure.

Putting Ideas Into Flight
Founded in 1928 as the Aeronautical Corporation of America, Aeronca was the first U.S. company to market a truly light airplane. The C-2 aircraft – now in the Smithsonian — opened up flying to the general public and made the company a major force in general aviation. Changing its name to Aeronca in 1941, it served in World War II as the producer of the Aeronca Grasshopper, a light liaison and observation monoplane. The company also manufactured hundreds of trainers and gliders for the war effort.

The post-war era saw the release of many popular aircraft including the Champ; the Chief and Super Chief; the Defender, and the Arrow, a low-wing cabin monoplane with retractable landing gear. From 1945 to 1950, Aeronca built thousands of light aircraft, reaching a peak production of 50 per day. Production of light aircraft ceased in 1951. In the short span of 23 years, Aeronca manufactured more than 17,000 airplanes of some 55 different models. (Aeronca’s legacy lives on for thousands of vintage aircraft buffs who gather at nearby Hook Field for a regular convention.)

Pioneers in brazing honeycomb and heat-resistant structures for the aerospace industry, Aeronca won the contract for the Apollo command module and manufactured nearly all of the outer structure of the spacecraft, which performed so successfully during the reentry to earth on the Apollo missions.

Prepared for Takeoff
Aeronca, Inc. brings a lot to the table for Magellan. Aeronca’s 250,000-square-foot plant is a Boeing-designated repair facility for the plug and nozzle exhaust system on the GE engine of the B747 and B767. This is where the company’s brazed honeycomb shines.

In addition to brazing and bonding, the company’s 250 employees’ core competencies include welding, conventional assembly, and specialized sheet-metal forming.

Aeronca is a major aerospace sub-contractor for engine/nacelle components, aircraft structures, and other advanced components. Its client base includes nacelle integrators and aircraft manufacturers, and it’s easy to see the value the company’s products bring to the airlines. For example, one of its new products is a B737-300/-400/-500 sheet-metal engine fan cowl door replacement. The durable, aircraft-grade aluminum replaces the older, composite engine access door.

“The original cowl doors are made from composites and, although they weigh about the same new as sheet metal, a composite will absorb dirt, dust, oil, and water and, over time, it gains weight. So there’s a weight advantage to switch to sheet metal,” says Diane Beamer, vice president of marketing and business development. “The airlines can save money and get a better maintenance package by purchasing sheet metal doors versus the composite.” It’s no wonder that, when Boeing introduced the next generation B737, it returned to metal cowl doors for the harsh engine environment of those structures.

Certainly, today’s climate also is a harsh one for airline-related industries, yet Aeronca is well positioned to rise above the clouds.

“As the composite doors age, they begin to delaminate, and the composites begin to lose their integrity. The composite doors must then be overhauled or repaired, which can often be quite expensive. The repair may only last one or two years, and when you combine the frequency of repair with the cost, you could be paying twice as much for repairs as a new sheet metal door costs.” Beamer observes. “The frequency and cost of these repairs will justify replacement with the Aeronca sheet metal door, as well as eliminating the repeated operational interruptions caused by the older composite doors. If your composite doors are approaching nine or ten years old, we can save you a substantial amount of maintenance cost.”