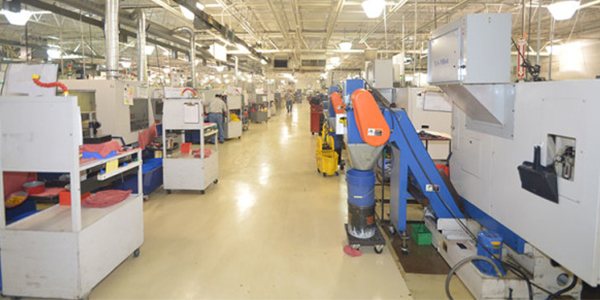 Swiss-Tech has made itself different on three levels: employee involvement, quality and technology. By doing so, it has given itself a leg up in an industrial environment in which the big manufacturers are looking to slim down their vendor bases. “Our proven track record gives us the advantage,” says Ken Bliss, president and co-owner. “Everybody in our industry has capabilities, but we differentiate ourselves with our responsiveness and our customer service.”

Power to the People
Swiss-Tech’s customers see the company’s responsiveness and high-level customer service first hand, because direct involvement of Swiss-Tech’s 158 employees with the customers is this manufacturer’s modus operandi.

“Our employees are empowered to work directly with our customers on the design for manufacturability of their parts,” says Al Seemann, director of operations. “Knowing what is critical and why allows our employees to select processes which ensure consistent part quality without unnecessarily inflating cost. Employee committees work on tasks such as setup reduction, ergonomics, safety and continuous improvement projects.”

Seemann says this policy has given Swiss-Tech’s employees an added inducement to succeed – both for themselves and for the company. “They feel they have a stake in the operation,” he says. “We’ve had virtually no turnover in our skilled classification. Our employees take a lot of pride in their workmanship, and the input has helped us reduce our non-conforming product substantially. In addition, we have been able to reduce our lead time to the procurement of the raw material and the cycle time. At the same time, we have shrunk our inventories.”

“Overall,” states Bliss, “Swiss-Tech’s system of involving employees with the customers has resulted in better products at fair and reasonable prices.”

Tradition and Technology
Swiss-Tech’s quality assurance begins with the Swiss technique, which it employs at its 45,000 square-foot facility at its home base of Delavan. First developed by Swiss watchmakers, Swiss manufacturing combines the traditional high-level precision associated with those craftsmen with modern equipment. Swiss machines use sliding headstocks in which material moves through the machine past the tooling. Such machinery ensures a high level of precision by giving the manufacturer the ability to produce tighter tolerances and longer turns to the diameter ratio.

Bliss says Swiss-Tech goes beyond technique to elevate quality throughout its manufacturing. “We’re ISO 9002-certified,” he says. “In our industry, more and more companies are achieving this certification, but not everyone has it at this point of time. Our Quality Management System has become the driving force for continuous improvement in all areas of our operation. It also provides a marketing advantage for Swiss-Tech.”

According to Seemann, “Quality assurance uses a laser micrometer and a white light-measuring machine in order to meet or exceed the demands of our customers. Most of our processes are being monitored with SPC (statistical process control). Employee training has grown to an average of 25 hours each year for every employee. We have in-house training facilities, our own training materials and trainers on our staff.”

Consistent Quality
That commitment to training helps Swiss-Tech stay abreast of the ever-advancing technology of manufacturing. Bliss says, “It better prepares our work force for new technologies and for handling new equipment. We’ve invested close to $500,000 a year in capital equipment, and most recently, this has involved CNC-operated machines. Extending the CNC concept gives us more consistent quality on the second-operation machines, over manually operated equipment.”

Indeed, CNC is a regular feature on Swiss-Tech’s new machinery. “The heart of our operation is still our 75 Tornos automatic screw machines,” says Seemann. “Now we are augmenting this with CNC Swiss machining. We also have updated much of our Finish Machining Department equipment with computer controls, which simplify the operator interface with the processes. We have automated some equipment to run lights-out operations.”

Swiss-Tech’s staff also keeps abreast of the advances in technology by attending tool shows, machinery shows and plant tours, and through participation in a number
of professional organizations. The latter includes membership in the Precision Machine Parts Association, which Bliss credits for its strong programs involving technological advancements in this industry.

Precisely Right
Swiss-Tech’s three-way focus on standing apart from its competition has helped it to a 35-year run of success. When Apollo 11 reached the moon and Neil Armstrong made his “one small step for a man, one giant leap for mankind,” Swiss-Tech components were part of the astronauts’ life-support systems. Back on Earth, Swiss-Tech produces components for computer joysticks, navigation systems for planes, instruments monitoring fluid controls, pressure sensors and gas-flow monitors. Swiss-Tech has also become involved in the medical field, producing components for dental implants, CAT scanners, pacemakers and equipment for blood analysis and kidney dialysis.

The medical industry, which is one that demands particularly acute precision in the components of its equipment, is one that promises much growth for Swiss-Tech in the future. “We’ll continue to try to focus on the medical industry,” says Bliss in discussing Swiss-Tech’s future plans. “Medical continues to be strong in the marketplace with new developments. The equipment is for invasive surgeries and is becoming more miniaturized, which is ideal for the work we do.”

Two other future focuses for Swiss-Tech are the telecommunications and consumer electronics industries. “Something new is always coming out in these industries,” says Bliss. “Also, like the medical equipment industry, both of these markets are becoming more miniaturized in products. New customers like these take a while to develop because we have to prove ourselves, but we feel confident in that we’ve already done that with our existing customer base.”

Swiss-Tech’s customer list is a virtual who’s-who in the industries it serves. Manufacturers such as Caterpillar, Eaton Corporation, Fisher Controls, Allen-Bradley, GAMBRO, Sun Hydraulics, Hewlett-Packard, Honeywell and Johnson Controls have become well acquainted with the high standards of Swiss-Tech. Given its continued focus, other customers will soon learn what these manufacturers already know.