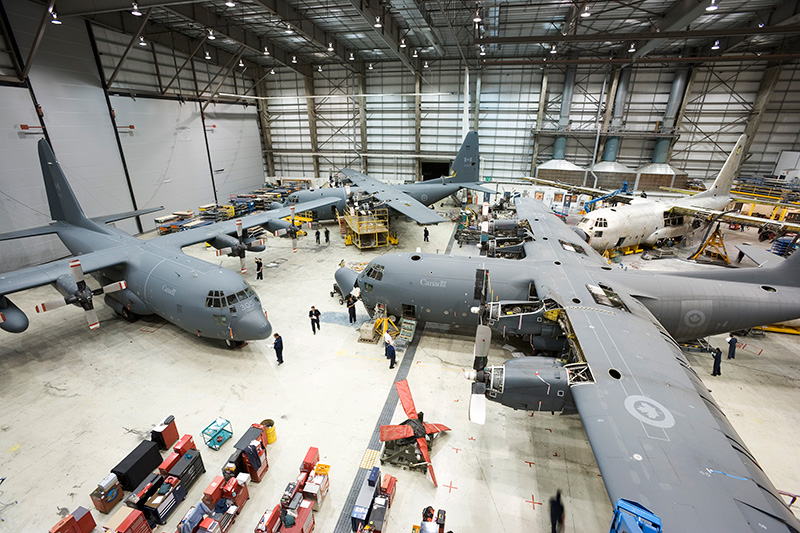 IMP Aerospace & Defence was named Canada’s number one Defence company in 2017, providing in-service support to seven fleets of the Royal Canadian Air Force. It is also one of Canada’s largest maintenance and manufacturing organizations supporting commercial as well as government fixed and rotary aircraft. Headquartered in Halifax, Nova Scotia, IMP Aerospace and Defence employs 2,300 overall across six operating units, offering a diversified line of products and services to both domestic and international customers.

“The capabilities of our operational units located across Canada allows us to provide a full range of manufacturing and technical services to the Defence sector as well as commercial OEMs,” notes Carl Kumpic’s, vice president of international marketing. Note than Kumpic’s title indicates a direction of IMP Aerospace and Defence beyond Canada’s borders.

Kumpic notes that the military aircraft experience and vertical integration of IMP Aerospace and Defence as a maintainer and modification operation is attracting international recognition. He adds that while the company has completed contracts with the United States government and civilian agencies, “The challenge for us is that key contracts can specify a preference for U.S.-based contractors. So we’re looking to develop strategic partnerships in the U.S. to address such requirements.”

Another challenge facing IMP Aerospace and Defence is increased competition with OEMs. “In the 1960s and 1970s you’d have a continued refresh of new aircraft off the production line, with progressive upgrades. For OEMs, those production days are gone,” Kumpic points out. “Aircraft used to have an expected service life of 10 to 15 years; today it is 25 to 30 years. To sustain an increased service life, you require more maintenance and modifications. Since OEMs aren’t producing many new military aircraft as they once did, , they see the maintenance and repair aftermarket business as lucrative and a sustainable revenue generator. By limiting access to their intellectual property or technical data, they can confidently monopolize on downstream aftermarket services. ”

Of course, the other side of the coin is that the need to upgrade rather than replace aircraft creates expanded opportunities for IMP Aerospace and Defence. One example is the anticipated upgrade of the CH-149 Cormorant helicopter fleet that was first put into service in the early 2000s for the Royal Canadian Air Force (RCAF) Search and Rescue (SAR) operations. This fleet has accumulated over 82,000 hours in service and is facing numerous obsolescence issues. IMP Aerospace and Defence is working with Leonardo Helicopters, CAE, GE Canada and Rockwell Collins Canada in collaboration to propose upgrades to modernize the fleet and keep it flying to at least 2040. This project is currently in the analysis phase, which is expected to conclude by the end of the year followed by a definition phase to identify the full aircraft system requirements.

The aim of extending the life of any aircraft is to keep it operationally relevant. “While some of this is replacing wear and tear items on the aircraft with new components, another important aspect is installing the latest technologies to ensure effective and continued mission capability”, Kumpic says. “A good example is today’s digital glass cockpit that replaces the legacy unreliable mechanical dials and instruments of the ‘steam gauge’ cockpit.”

Equally important is the power plant. “Fuel efficiency is a major concern for commercial as well as military aircraft. Replacing or upgrading older engines with newer technology is not only a safety objective, but a way to reduce operational expenses through reduced maintenance as well as fuel economy,” Kumpic notes.

“It’s an exciting industry,” Kumpic says. “Commercial and military customers are looking for creative innovations designed to transform legacy platforms into like-new aircraft or missionize commercial platforms for military operations.” As a major player in Canada with a growing global presence, IMP Aerospace and Defence offers the experience and technical capabilities to deliver what is needed to ensure continued fleet effectiveness and availability.