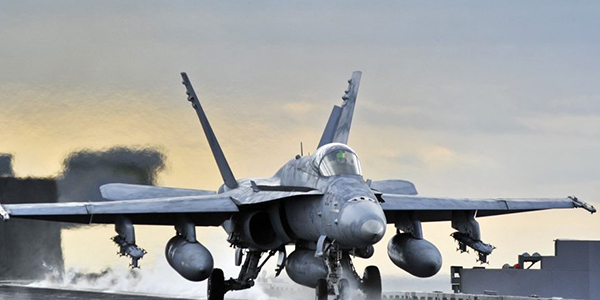 With the world’s focus today on national and world security, we all marvel at the prowess, courage and might of our military. They accomplish wonders through their intelligence, superb training and experience, and dedication. What we might not marvel at is what we cannot see in these demonstrations of USA-grit because a lot of that military might is due to things unseen – such as the fuel cell bladders those fearsome jets, helicopters and stealth planes require to get the job done expeditiously while helping to deliver crews safely back to their bases. One company working every day to assure quality and fail-safe products for these purposes for our military is Amfuel of Magnolia, Ark.

Celebrating its 20th anniversary this year, Amfuel is only one of two U.S. companies manufacturing aircraft fuel cells, says Robert James, president and CEO. Worldwide, under a half dozen companies manufacture these fuel cells. Amfuel designs, engineers and fabricates these products from composite materials used in aviation, aerospace, by military ground forces, as well as by the commercial transportation industry. Composites used include elastomeres, metals, plastics, fabrics, films and adhesives – all used to form fuel bladders for the aviation industry. These are also used to insulate rocket motors, in military water and fuel logistics systems, and for fuel tanks in the transportation industry.

Fuel-Cell Propulsion
All fuel cells are not created equal, as James points out. “Our U.S. competitor uses a spray-type operation, forming two female molds of polyurethane and spraying the inside and then joining the two sections together,” he says. “Whereas we use stronger Kevlar nylon-type materials for our reinforced products, which are hand-fabricated, thereby eliminating any seams, which can result in product breakdown or leakage.” James adds Amfuel is the only company in the world manufacturing fuel cells using this method.

“We are the exclusive supplier to companies like Bell Helicopter and we supply most of the major OEMs such as Boeing, Northrop Grumman, and Lockheed Martin,” James says. The company also supplies the U.S. military with aircraft fuel cells. “We are the major supplier of fuel cells to the U.S. government and we supply them with products for practically any type aircraft you can imagine – and many you can’t imagine which I cannot tell you about.”
The company also supplies products to military outfits in other countries. “A lot of the older U.S. fleets of military aircraft such as the F15s and F16s and others have been sold by the U.S. government to foreign countries,” James says. “We support these aircraft for the life of these aircraft.” He adds Amfuel just booked a significant contract with Norway to provide fuel cell replacements for their F16s. “We also supply them and our other customers with value-added engineering services and technical training – from basic fuel cell or coated fabric product design all the way to delivery of the product and supporting these products throughout their life expectancies.”

In addition to bladder fuel cells, Amfuel manufactures self-sealing fuel cells and crash-resistant cells engineered to withstand a drop from 65 feet without any leakage. “The self-sealing cells are built to take any gunfire during a mission so the fuel cell automatically seals up so as not to allow any fuel to leak out,” James explains.

Amfuel is the sole-source manufacturer for Oklahoma City’s Tinker Air Force Base’s B52 heavy bombers. “That plane has been flying since the mid-1940s and is scheduled to fly until 2020, which will make it about 100 years old and still in flight,” says James, adding it’s the only heavy bomber still in existence in the U.S. fleet. The B1 and B2 are more strategic bombers dedicated to stealth operations as they are able to infiltrate enemy lines, drop their payloads quickly, and then return to base, notes James.

Most customers have long-term contracts with Amfuel and the company routinely works on up to six U.S. government contracts at any given time, supplying as many units as required. In conjunction with Sikorsky, Amfuel is designing the fuel cells and the fuel cell system for the new Comanche helicopter for the U.S. military. The fuel cells will be designed and manufactured with lightweight and crash-resistant construction capabilities. “It will be a new attack helicopter with stealth capabilities and it will be designed primarily with composites,” James says. The Comanche is scheduled for testing during the summer of 2004.

Coated-Fabrics Technologies
With extensive experience in the design and engineering of coated fabrics, Amfuel offers a wide range of container products for bulk storage of everything from air to potable water to oil to fuel to foodstuffs to chemical substances. Made of nitrile, neoprene, and urethane, these storage containers are designed for numerous rigorous and rugged applications.

For instance, Amfuel’s collapsible and towable drums are designed to store and transport fuel and water and are manufactured in accordance with U.S. military specs.

Fabritank(r) offers flexible solutions for liquid storage requirements and its truck-mounted tank is strong and puncture-resistant, constructed of multi-ply fabric tire cord. “These liquid storage tanks can be mounted on the back of a flat-back tractor trailer rig so the motor operator can carry a variety of substances such as molasses and syrups,” James says. “They can also be used to transport bulk grains. This means rather than returning home from a delivery in a deadhead operation, a trucker can have hauls both ways.” These applications are used a lot by independent truckers.

For storing water for fire protection requirements, Amfuel offers embankment tanks that are low-cost and aesthetic solutions that can also be used for drinking and plant-process water requirements. “These tanks can hold up to two million gallons and can be used for drinking water or plant-process water at only one-third the cost of a high-rise type of tower,” James says.

Dunnage bags are tough, reusable and repairable products used to protect ship cargo from shocks during transport. Amfuel’s ABFDS (airborne bulk fuel delivery systems) are designed for quick installation and removal from aircraft, allowing rapid conversion from tanker to cargo configuration upon completion of a fuel mission, James says. “We have several installed on C130s and it’s basically a refueling station complete with tanks holding the jet fuel and the pumping equipment and hoses that accompany it – it’s a veritable mobile gas station. It can also be used for air-to-air refueling on the C130s.” Both bladders can be pumped off to ground tanks or storage in a mere five minutes. Portable pumping systems are completely self-contained and can be set up and operated using a few as three people.

Continuous Engineering
As any successful business understands, keeping step with changing business environments and customer requirements is an ongoing process. “We have to advance our technology almost on a yearly basis to meet the ever-changing demands of the marketplace,” James says. “For example, aircraft manufacturers want lighter and more durable fuel cells at lower costs.

New to the market is Amfuel’s HNBR (hydrogenated, nitrobutal rubber) inner liner for F18 fuel cells. “In the past, polyurethane fuel cells had to be periodically maintained with a coating of oil to protect them from drying out,” explains James. “With our HNBR construction, you don’t have to do that and these fuel cells can sit on the shelf for 20 years and still be as good as new.”

Clearly a company driven by continuous technological advances, Amfuel boasts a knowledge base equivalent to thousands of years of experience in the industry, James says. “Our knowledge base is irreplaceable in our industry or any other, for that matter,” he continues. “The average age of our 316 employees is about 45 years old – which means our people have been in this business for 30 or more years. And our policy is to bring on new engineers out of college and train them in particular areas so they can progress according to their own talents and abilities.”

With about 70 percent of the U.S. market share and 45 percent of the worldwide share in these markets, Amfuel attributes this kind of success to the superior quality and longevity of its products. “We just replaced a complete set of fuel cells in the last B29 that’s still flying and we made those fuel cells back in 1965,” James says.

Surveying distant market opportunities, Amfuel expects annual growth over the next few years to be between 10 percent and 15 percent in its coated fabrics products. “Within the next 20 years, we think water will be one of the most important commodities in the world and requirements for our water storage devices will increase,” James says.

Amfuel – newly ISO 9001-2000 certified – plans to compete in diverse markets it had not been able to compete in prior to this new certification. “This is just another step in our continuous quality evolution and we attribute our growth and success to giving our customers what they require at a reasonable price,” James says.

James notes that two years ago, sales were $17.6 million and the company’s last year-end revenues were up to $23 million. He says Amfuel plans to operate a controlled growth program because “we’ve taken some pretty big leaps in the last few years and we want to stabilize that growth.”