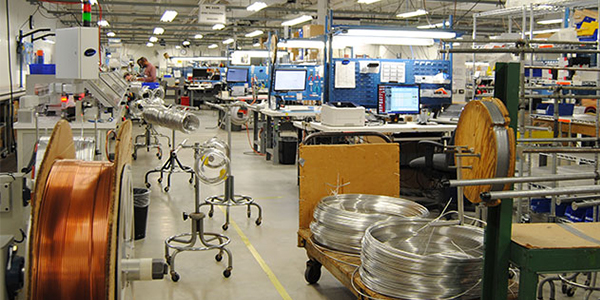 You are in your car, on your cell phone, confirming the flight of a business associate. You meet him at the airport and then drive to a golf tournament benefit. You spot a McDonald’s, stop and grab a few Big Macs and fries. After the tournament, it’s back to the office, where you both pull up stock reports from your computer. What does all of this have to do with a quiet, Midway, Tenn.-based company called Minco, Inc.?

Curiously, it has a lot to do with the company nestled in the Appalachian foothills. Minco is one of the two largest producers of fused silica and fused magnesia, and both products are used in many of the everyday products we all rely on and take for granted. Fused silica goes into automobile engine blocks, aircraft turbine propellers, golf clubs and the epoxy found in computer chips. Fused magnesia is also used in the electrical tubular heating elements found in deep fryers at McDonald’s or in stoves and dishwashers. It’s also an additive used in brake pads for automotive brake systems. Minco has supplied industry giants like Ford Motor Company and Emerson Electric Corporation, the market leader for producing tubular heating elements.

“Our products are used as raw material for a variety of manufactured goods,” explains Steve Beversluis, vice president of sales and marketing. The appliance industry “is our biggest market and our core business for fused magnesia.”

Minco’s core business for fused silica is precision investment casting. Beversluis explains, “The investment casting process is more commonly known as the lost-wax process, in which you produce a waxed pattern of a part you want to manufacture.”

Fused magnesia is an excellent insulator and has superior properties of thermal conductivity. Like fused silica, fused magnesia is also used in refractory applications such as furnace linings, molten material handling and a variety of industrial applications using heat-intensive processes.

The automotive brake industry uses Minco’s fused magnesia in place of the asbestos that once was used to manufacture brake pads. Fused magnesia is one of the key raw materials used in friction material formulations.

A Heritage of Innovation
Minco began in Midway in 1977, when Kenneth Jenkins decided to develop his idea of how to produce the existing formula for fused silica in a more cost-efficient manner. In the typical American-success-story pattern, Jenkins worked to develop his idea in his spare time in the barn behind his house. There he invented and built the revolutionary rotary arc furnace, which increased the quality and the productivity of fused silica to at least 10 times its previous level, thereby introducing new value to the fused silica industry.

Jenkins’ method uses breakthrough technology in an electric arc furnace. “The original furnaces produced a brownish-colored fused silica, and the ingots weighed about 1,000 pounds,” explains Beversluis. “With our new technology, using the same amount of power, we get a pure-white ingot weighing about 8,000 pounds. So there is a significant improvement in both cost and quality. This method is still contributing to Minco’s success today, and it is one of the things that made Minco a market leader.”

Known Quality
This commitment to quality and total customer satisfaction has resulted in Minco’s ISO 9002 certification. Minco’s manufacturing, research and development, and sales and marketing groups have extensive experience working with technological leaders in the industry. “We can use that knowledge and experience to produce the quality products we are known for,” says Beversluis. “Additionally, we have worked closely with critical suppliers like Macon Wire (particle sizing screens), US Silica (raw silica sand for producing fused silica) and Martin Marietta (raw magnesite used for producing fused magnesia) to continuously improve their own quality programs.”

Minco’s 165 employees are dedicated to the customer before, during and after the sale. “We provide on-site technical support to our customers,” says Beversluis. In its spirit of continuous improvement, Minco is developing new products for the semiconductor business segment and for the precision investment casting segment that will reduce costs to customers while improving efficiency. “We are also working on new products for the electrical heating element industry that will improve the filling operations of tubular heating elements,” says Beversluis. “Again, this is all in response to our customers’ requests.”

Over the last four years, Minco personnel met with the company’s top 10 customers. “We told them some of our strategies and our ideas for new product developments,” he says. “They came back to us with input as to what they would like us to focus on.

Since 1990, Minco has expanded to nearly four times its capacity, which Beversluis attributes to market growth as a result of the company’s superior customer technical support, continuous improvement and high-quality products. Minco’s facilities occupy about 110,000 square feet. Minco also maintains sales offices in the Midwest, South, West Coast and Europe. In addition, the company has sales agencies located throughout the Far East and South America.

In addition to continuing to grow its core businesses, Minco looks to include acquisitions as part of its strategic growth plan over the next five years. “Our growth will be through new product development, core business growth and acquisitions. We will continue to be the market leader for fused silica and fused magnesia through technological advances and continued innovation,” concludes Beversluis.