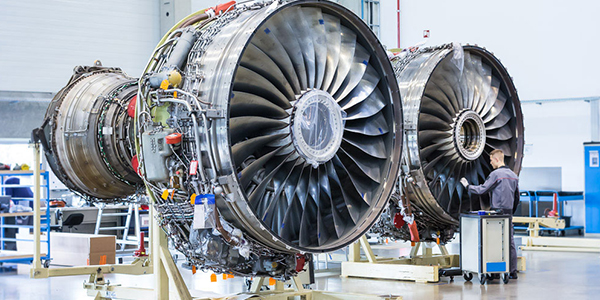 As international aviation acclimates to the altitude of the new century, AeroThrust Corporation is ready. Renowned for its expertise in engine overhaul, AeroThrust has added new technical and business capabilities to help customers maximize operational effectiveness.

In November 2004, AeroThrust received certification to overhaul all models of the prolific CFM56 engine, making the company the only U.S.-based independent engine maintenance and repair shop with this distinction. “We have the capability to do up to full overhauls, so we do light maintenance work, repairs or a full overhaul,” said President Faryt Kalhil.

The CFM56 is a very sophisticated engine that in many regards is replacing the Pratt & Whitney JT8D as the workhorse of the industry. CFM56 is deployed on the new generation Boeing 737s and Airbus A320, among other aircraft. About 15,000 CFM56 jet series engines are in service today.

“The beauty of it is that we went into this product line at the request of many of our JT8D customers that had transitioned to the CFM. So we already had a market,” Kalhil said. “There have been other companies that went into the CFM56 in the past, bought the tooling, made the transition and yet were not successful because they couldn’t attract any customers. One of things that differentiates us is that we are a 60-year-old company with a reputation for quality. Because of the sophistication of the CFM56, customers need to have confidence in your quality and that’s the area where we’ve really excelled.”

The time on wing for the CFM56 sometimes surpasses 30,000 hours, while the JT8D averages 8,000 to 12,000-cycles of uptime, an important technical distinction that ultimately plays into AeroThrust’s strength. “It’s an amazing engine that also has the potential to outlast many of the engines in the market today,” Kalhil said. “It stays on wing very long and is a great engine, but at the same time there is a huge number of them, and in comparison, a limited number of companies that are able to repair the CFM56 engine.”

“The market is going to have a big hockey stick effect,” he said, referring to the anticipated upward angle for CFMs coming off wing for maintenance.

A Storied Past
Like many Americans, AeroThrust was born just after World War II. In 1946, Air Carrier Engine Service, Inc. (ACES) received its certification from the Civil Aeronautics Administration (predecessor to the FAA). The company was established by William C. Bergstrom, George Snowden and John Fitzgibbon, former production management personnel for Pratt & Whitney Aircraft during the war. Even then it enjoyed the perfect location at the Miami Air Field (later Miami International Airport), the world’s largest maintenance and overhaul base for commercial aircraft at the time.

During the 1950s and 60s, the company advanced pioneering innovations in aircraft engine service and repair. Engine exchange, engine leasing, “power-by-the-hour” and “engineering follow-up” are all unprecedented customer service programs implemented by ACES. Demands for reciprocating engine overhaul diminished and ACES geared up for JT8D engine overhaul. In response to this move, the company built a jet engine test facility and received repair station certification for the Pratt & Whitney JT8D. The company’s technical expertise and business acumen continued in the 1970s and 80s.

ACES was next acquired by AeroServ International of Houston, Texas, which was oriented toward the aerospace and defense industries. At the same time, the company performed JT8D repair service for the government, moved to a new facility nearby, and changed its name to AeroThrust. AeroThrust was selected by Pratt & Whitney as an approved Warranty Repair Station for JT8D-200 Series engines in 1992. Certification in the International Standard for Organization (ISO) 9000 was received in 1998.

Post 9/11 Recovery
The events of Sept. 11, 2001 deeply and negatively impacted AeroThrust. In the aftermath, airlines downsized their fleets and reduced aircraft utilization, and as a result, fewer engines needed repair and overhaul. AeroThrust responded to the crippled market by becoming a trader in parts and engines, a successful business redefinition during that difficult time. In the midst of this critical period, AeroThrust was purchased by Windstar Capital LLC, of Los Angeles and New York. New owner Jack Risko put in place a top-flight management team with Kalhil, an experienced mechanic, in the cockpit.

As the industry worked to recover, AeroThrust prepared for takeoff. Signs of the company’s reemergence came in early 2004 when AeroThrust signed service contracts with several significant aircraft operators. In addition to these promising events, AeroThrust received FAA certification for all models of CFM56 engines in that same year. The company had already secured a major commitment by Scandinavian Air Systems (SAS) to service its fleet of CFM56-7B engines and that proved to be just the beginning as AeroThrust added more than a dozen customers. Today, not only has the CFM56 taken off, but at the same time, the company continues to dominate the JT8D market serving more carriers such as Iberia, ABX and Midwest. International business is also thriving and the company has opened an office in New Zealand to support its growing global market presence

Industry Commitment
These activities have been achieved through the company’s considerable commitment to service, coupled with a culture of “Doing Whatever It Takes” and response times that are unmatched in the industry. With increased capabilities, AeroThrust also offers direct sales and leasing of JT8D engines and is expanding that to include CFM56 engines. The company’s stringent procedures for engine and component processing are designed to meet or exceed manufacturers’ specifications, regulatory requirements such as FAA, EASA, CAAC, DGAC and others, and customer specifications.

AeroThrust’s flexibility extends to its people as well as its service options, for example: with Airplane-On-Ground (AOG) service, technicians are ready to hop on a plane and service the grounded aircraft’s engine at a moments notice, anywhere in the world. “I can honestly say that I feel confident that no company in the industry has more flexibility than AeroThrust,” said Kalhil. “Our people make the difference.” There seems to be little question about that, when you consider that the average tenure of an AeroThrust employee is 17 years, and the most senior employee has been with the company 46 years.

Capabilities are also one of AeroThrust’s strengths. Its lean shop has a laser focus on quality and service that infuses all operations. Its 140,000-square-foot facility in the old Pan Am building is abuzz with in-house capabilities, including disassembly, cleaning, NDT inspection, machining, plating, welding, plasma-spray, chemical and metallurgical analysis, calibration, balance and assembly. Technicians work with state-of-the-art processes and advanced metals such as titanium and other alloys, and electro-deposit materials such as nickel, chromium, nickel cadmium, and silver.

As could be expected, many companies send engines to AeroThrust for maintenance and certification. “This is a company that has always made quality its hallmark. And from the get-go AeroThrust was one of the top quality MROs in our industry; throughout the years we have managed to make it even better and have kept quality and customer service at the forefront of our operation,” Kalhil said.

Meanwhile, in response to market trends, the customer base has expanded to include many international and domestic airlines, brokers and leasing companies. “We have a wide array of customers and that’s part of our strength. One thing that has helped us survive the downturns in our industry has been the diversity in our customer base, including customers from all over the world.”

A growing trend in the industry is airlines selling their fleets and leasing them back, and outsourcing the maintenance of more product lines. “More airlines are getting out of the business of maintaining their own engines and there is going to be added opportunities to service engines (including the JT8D) for airlines,” Kalhil said. “AeroThrust is also going to be a significant player in the CFM arena. We are positioning ourselves to do more for our customers in terms of service, including sales and leasing options, and we will provide alternatives that very few companies can match. When all is said and done, AeroThrust will do ‘Whatever It Takes’ to deliver nothing short of outstanding service.”