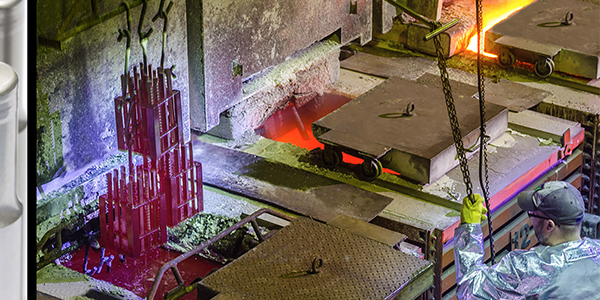 By nature, Century Sun Metal Treating is a service organization. The Traverse City, Mich.-based company provides a full roster of metal-treating services, all with one goal in mind: to increase the service life of its customers’ tooling through quality metal treating and by adding value to those tools. Century Sun also boasts a scrap rate of less than one-half of 1 percent annually, and its guarantee policy (reimbursing customers at full cost) is second to none in the metal-treating industry.

Among the metal-treating services Century Sun provides are heat treating, carburizing, carbonitriding, quenching, tempering in both vacuum equipment and salt baths, induction hardening and ion nitriding. The diversity of this services offering has made Century Sun one of the industry’s leaders in vertical integration, and has established the company as the one-stop shop for metal treatment.

Century Sun has bolstered these key positioning elements with its total quality management program. Its more than 100 employees, including its staff of metallurgists manning the company’s full metallurgy laboratory, are organized into self-directed work teams. The company has proven to be one of the industry’s most forward-looking companies in its metal-treatment processes as well. It offers two patented ion-nitriding processes, Caseware® and Casetough®.

Tooled for Quality
All of these facets have combined to bring Century Sun a long way from when William G. Jamis founded the firm in 1979. From the beginning, Century Sun became known for taking jobs the competition felt were too difficult, too risky and too time-consuming. OEM manufacturers such as General Motors, Ford, Daimler-Chrysler, Honda, Caterpillar and New Holland (to name only a few of its more than 700 customers) have since come to rely on Century Sun to harden, temper and quench the tools and parts necessary for their manufacturing operations.

Century Sun’s plant now measures 70,000 square feet. The company’s organization also includes sales offices in the Detroit and Grand Rapids, Mich., metropolitan areas, and in the Toledo, Ohio, areas Its customer base covers 37 states, Canada and Mexico. The company targets the automotive industry, but extends to many other industries relating to metal working and manufacturing with metals.

At the Industry Forefront
The company’s sales and marketing approaches are as varied as its metal-treatment processes. The direct-sales operation relies on in-person or on-the-phone contacts. In addition, Century Sun maintains an interactive Web site (www.century-sun.com), participates in many industry trade shows and advertises in trade magazines. The company is also heavily involved in promoting the industry through professional organizations, sitting on many committees whose purposes run the gamut from technology to the development of new powdered materials for use in manufacturing. Plant visitations and client tours have also proven to be extremely effective.

Century Sun’s annual sales top $10 million, quite a mark for a 20-year-old business. Its near-future goal is to top $12 million — and the company is on pace to do just that. In the past seven years, Century Sun has achieved double-digit growth on an annual basis.

The company is currently completing a building expansion that will allow salt-bath hardening operations on materials up to 9 feet in length, an attractive added value in the broach-tooling industry, the feed-screw industry (for plastic injection molding machines) and the extrusion industry. It will be a strong niche market for them. These industries need quality heat treating and straightening of long-length tools.

The Name to Trust
Century Sun’s strength lies in its unrelenting focus on the customers. The heat-treating business is built on trust. Customers bring extremely expensive tools and parts to the company, with almost all of the cost basis already built into them. They trust that Century Sun will perform only quality thermal processes, and that the tool or part will increase significantly in value and will perform at or beyond expectations. They trust, too, that they will not have to be concerned about tool or part failure — and that the item will look the same as it did before.

The company is continuing to expand its customer services, as it seeks to meet its customers’ continuing requirements and industry demands for high-quality heat treating and tooling. The company operates its own fleet of 17 trucks and driver-employees. Along with the distribution facilities in Detroit and Grand Rapids, Century Sun plans to open a New York distribution center soon.

Along with the company’s total quality management training, Century Sun’s customer service has been solidified by the fact that there is little employee turnover. The company has engendered a strong team spirit, partly through its work team organization and partly because of its reward system. Wages at Century Sun are based on skills, not seniority. The company also pays bonuses when goals are reached.

New market opportunities also await Century Sun. Aerospace represents a significant new customer area, in which demand is increasing for heat treatment for long lengths — which the company can provide in its salt bath area. At this time, Century Sun is in the process of receiving its accreditation from the National Aeronautics Accreditation Board.