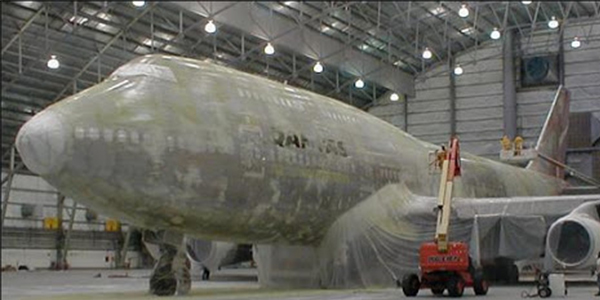 “We’re the only company that can make these kind of transparencies. We’re especially proud of our work for the F-16 and F-22 programs.”

The speaker is Jerry Wilson, director of military programs for Sierracin/Sylmar Corporation, located in Sylmar, Calif. Founded in 1952, the company is located about 45 miles north of Los Angeles International Airport, which gives it proximity to many of its best customers. Indeed, it’s a good spot to be in terms of after-market performance. But more on that later.

Sierracin/Sylmar has established a global reputation as the leader in advanced composite technology for canopies and windshields for high-performance aircraft. The company operates from a home base that includes a 320,000 square-foot manufacturing and laboratory facility in the San Fernando Valley and has a total of more than 500 employees, including scientists, engineers, technicians, production workers and other professionals.

From Simple to High-tech
Sierracin/Sylmar designs and makes transparencies for the top contractors and users of both military and commercial aircraft. Its range of products includes acrylic and polycarbonate composites, glass and acrylic/polycarbonate composites and all-glass transparencies. They include everything from something as simple as monolithic acrylic cabin windows to the most technologically advanced composite lass/polycarbonate/acrylic products that “operate in severely hostile environments,” according to Wilson. “They can withstand everything from bird and ballistic impacts to nuclear blast effects.”

Its transparent conductive coating systems include Sierracote 303, a vacuum-deposited gold coating; Sierracote I.T.O (indium tin oxide), a rugged vacuum-sputtered coating applied to glass and plastic; and Sierragrid, which uses a photon lithographic process to make a coating with fine lines that aren’t visible at normal viewing distances. The latter is designed to provide distortion-free anti-ice protection for 28-volt systems.

The company’s list of customers is a virtual “who’s-who” of the aircraft business. It includes such domestic and offshore companies as Airbus, Beech, Boeing, Cessna, de Havilland, Embraer, Fairchild, Falcon Jet, Fokker, Learjet and Sikorsky, to name a few. Besides the United States, its customers are located in Brazil, Canada, Germany, Argentina, Israel and Italy.

Clear Innovation
Sierracin/Sylmar also has an impressive list of companies with which it has worked to jointly develop products. Among these is Japan’s Asahi Glass Company, a relationship that goes way back to the 1970s. In 1981, the two companies set up a joint venture to make all-glass, laminated windshields and other aerospace transparencies. Asahi makes the glass, applies a tin oxide coating and thermally tempers the various plies. Sierracin/Sylmar then makes all-glass transparencies using the Asahi-supplied glass components.

Other firsts include the radar-reflective coating on plastic; the acrylic polycarbonate laminate windshield; the polycarbonate bubble canopy; the low observable aircraft transparency; the all-plastic, electrically de-iced windshield (still the only one of its kind); and the 650-knot, 4-pound bird impact-resistant wraparound fighter windshield, to name just a few.
Sky-high Performance

On the commercial aircraft side, since Sierracin/Sylmar invented that first composite windshield back in 1959, “we’ve maintained our leadership by meeting all requirements for high-performance aircraft,” states Neal Adams, vice president, commercial marketing. All transparencies meet Federal Aviation Administration/Joint Aviation Authority Part 25 regulations, and Sierracin/Sylmar is a total-quality-management company.

The company also serves the business-jet and commuter-aircraft market with a full range of products. “Our transparencies are the lightest-weight, lowest-drag and most structurally efficient available,” Adams asserts.

But the company has perhaps had its greatest impact on the military side. That includes most of the major aircraft developed over the last three decades, including the much-heralded F-16 and F-22 programs. Indeed, the company’s latest product launch is the development for “the F-22 and joint strike fighter programs,” according to Wilson.

“We are the most experienced developer and system supplier of upgraded and retrofit military transparencies in the industry,” he adds, citing such system upgrades as energy-absorbing coatings, increased impact resistance, improved pilot vision (including wraparound windshields and structures that replace the old three-piece windshields) and more.

As Good as New
But the company’s role doesn’t end once an aircraft is up and flying. “Throughout the aviation industry, minimizing an aircraft’s overall maintenance cost is a major issue,” says Wilson. “Because of that, we’ve developed a comprehensive program that includes overhaul and repair services. We return transparencies to new-part condition, with a new-part warranty.” That also makes proximity to Los Angeles International an important part of the company’s operations.

Beyond the aircraft business, Sierracin/Sylmar’s TransTech products apply the same technology to a number of more down-to-earth uses. These include locomotive windshields (Amtrak is a big customer) and transparent vehicle “armor” for everything from transport vehicles, both civilian and military; naval vessels; and discreetly armored transport, which can include unmarked vans and limousines. The list of TransTech products also includes architectural security and fire-related products, heated and unheated window products, industrial and heavy equipment windows, impact-resistant machine tool guards and more. All are produced within the Sylmar facility.

Other divisions include Sierracin/Harrison, which makes and supplies high-technology fluid fittings, metal seals and installation tooling for the aerospace, nuclear and ordnance industries. This division is located in Burbank, Calif. Sierracin Corporation Europe, based in France, is a fully integrated subsidiary of Sierracin/Harrison. It is responsible, technically and commercially, for 40 production sites and airlines scattered throughout Europe, Africa, the Middle East and India.

Up, Up and Away
Sierracin/Sylmar’s future is limitless. When asked about future product development and company expansion, Wilson replies, simply, “There are so many more aircraft in the commercial segment.”

In other words, as long as the aircraft industry keeps rolling out new products or upgrading components (including windshields and other transparency uses), there will be plenty for Sierracin/Sylmar to do. In any case, “we will continue to emphasize both personal service and quality craftsmanship, even as we continue to expand our product line,” Wilson adds.
For Sierracin/Sylmar, as they say, the sky’s the limit.