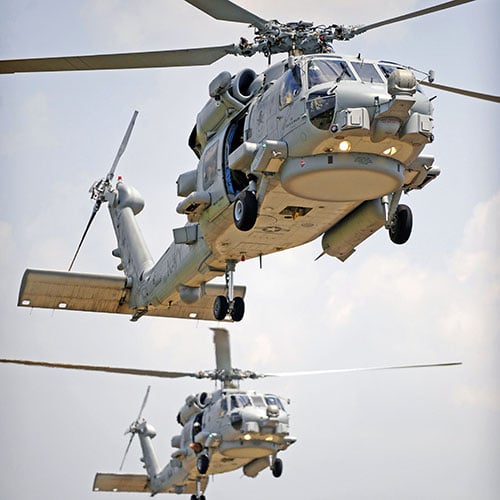 By far the company’s largest customer of maritime radar technology is the U.S. Navy. Telephonics supplies the radar system, known as the AN/APS-153(V) for the MH-60R Maritime Strike Helicopter or Romeo. The AN/APS-153 offers many innovations in radar technology. It was the first radar to incorporate an internally integrated IFF interrogator system. “It’s extremely helpful to be able to incorporate this within the radar and associate it with IFF interrogator contacts,” French says, adding, “It enables the air crew to declutter the scene and focus on the contacts of interest – that’s a huge innovation, and what the operators have called a real ‘game changer’.”

Another advancement offered with the AN/APS-153(V) is a capability called Automatic Radar Periscope Detection and Discrimination system known as ARPDD. Telephonics developed ARPDD for the Romeo helicopter in close partnership with Naval Air Warfare Center-Weapons Division China Lake to counter developments of the ultra quiet submarines that only briefly expose their periscopes on the water’s surface. “There are limits to detecting submarines especially the newer generations, but this capability levels the playing field,” French explains. “ARPDD will force submarine operators to greatly alter their tactics – it changes the ASW game completely.

Besides the U.S. Navy, Telephonics’ radar systems support the missions of the U.S. Coast Guard and a host of international customers with its APS-143C(V)3 maritime surveillance radar. The company is breaking into the unmanned aircraft area with its RDR-1700B, a radar that incorporates all the features of a larger system in one package that weighs less than 80 pounds. The latest version of this system has been issued the AN/ZPY-4(V) nomenclature and has been selected for the U.S. Navy’s MQ-8 Fire Scout UAV program. “Some have said that without a highly capable multi-mode radar on the platform, a maritime UAV is essentially looking at the world through a soda straw, but with the AN/ZPY-4(V) onboard, Fire Scout becomes a true force multiplier for the fleet.”

The U.S. Air Force and many other International Air Force operators rely on Telephonics’ IFF Interrogator. Telephonics continues to innovate in this area, introducing the world’s first All-Mode Certified IFF Interrogator. In addition to the global AWACS fleet, this All-Mode capability is being adopted by navies from Sweden to Canada, and the U.S. Marine Corps and U.S. Air Force have selected Telephonics’ IFF technology for their ground-based air surveillance radar requirements. “This has been a great success story – our investment in leading edge technologies is paying off for our customers and users.”

A True Leader in Communication Technology
Along with offering world class radar systems, Telephonics is an industry leader in the defense and civil markets for advanced communication systems offering a variety of wired and wireless products. “Telephonics’ fully digital, open-architecture design includes adaptability to special mission and IP communications. Our Secure Digital Intercommunications (SDI) suite is the communication backbone of some 45 platforms around the world,” says French. The secure digital intercommunications market is dominated by Telephonics’ technologies.

One product that has made significant changes to the communication system marketplace is Telephonics’ TruLink® Wireless Communication System. TruLink is a wireless communication system that allows users to communicate casually in high noise environments and work free from cords that have restricted movement in the past. TruLink is used by aircraft maintenance crews, assembly line personnel, and search and rescue crews.

“The success of TruLink is simple – no more cords – its wireless. Maintenance crews can go about their job functions without the restrictions of cords and be in constant contact with the rest of crew while performing mission critical checks. Search and rescue crews can do patient assessments and perform life saving procedures while staying in contact with the field hospital,” adds French.

TruLink recently entered the civil market with a sale to The Boeing Company. Boeing Commercial Aircraft is using the system on its production line where it improves safety, increases productivity, and makes communication easier and more reliable for flight-line employees who in the past relied on whistles, hand signals, and unreliable radios to communicate with each other. Telephonics believes this is the start of an entirely new market area for their TruLink product line.

Telephonics’ Future
As with other companies in the aerospace and defense industry, Telephonics is dealing with shrinking U.S. Defense budgets and an overall spending slow down in the global economy. French notes there are four factors guiding Telephonics’ plans for the future:

Needless to say, French says of the opportunities facing Telephonics, “we are excited about the future.”