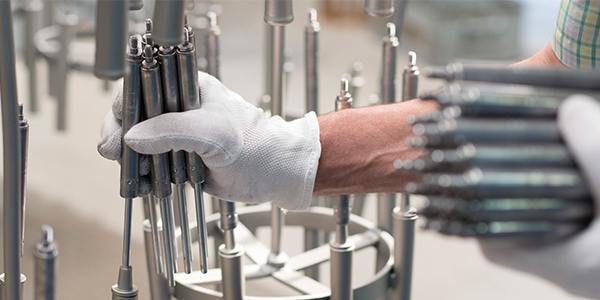 Suspa Incorporated was established in North America in 1974 at the end of the oil embargo, and as the country was emerging from a recession. The Altdorf, Germany-based Suspa Holding GmbH grasped an opportunity to establish a foothold in the United States because the escalating price of gas and automobiles in the 1970s had made the small, energy-efficient hatchback a popular car. Already a leading producer of the gas spring cylinders used to raise and hold open hatchback lids, the company chose Grand Rapids, Mich., for its U.S. operations because of its proximity to Detroit, where the major automobile makers were based. With a handful of employees and high hopes of joining America’s economic recovery, Suspa Inc. began producing about 100 cylinders a week for its first customer, American Motors, in January 1976. Other new business soon followed.

In those early days, as business ebbed and flowed according to the state of the volatile auto industry, Suspa employees did a little of everything, including vacuuming on Sundays. By 1978, however, new contracts with Chrysler and Ford helped boost sales to $1.5 million, forcing the company to add a second shift, and by 1980, sales rose to more than $4.5 million.

Those early years in Michigan were difficult for Suspa, since the company’s economic well-being was dictated by the performance of the automobile industry. When Suspa’s automotive customers worked overtime, Suspa employees worked overtime. When its customers laid off employees, Suspa cut back on its work force.

To help boost sales volume, the company began to diversify in the late 1970s with a number of additional applications for its popular gas cylinder. Under the direction of innovative engineers and designers, Suspa developed hundreds of applications for its product. Cylinders were created for such diverse applications as jukeboxes, airplanes, beds, doors, windows, office furniture and treadmills.

The company branched out further, and today it is a world leader in the design and manufacture of lift, support, damping and adjustment devices, including locking and non-locking gas spring cylinders, dampers, impact absorbers, spring struts and lift systems. Though its gas cylinder remains its most popular product, sales to the automotive industry now represent only a small fraction of its business.

In the end, diversification has proved to be extremely profitable. Due, primarily, to its expanded product line, Suspa’s sales leaped from $1.5 million to more than $57 million in just two decades. Confirming the company’s growing success, Inc. magazine ranked Suspa 177th among its 500 fastest growing, privately held businesses in the United States in 1983.

With such a wide product offering, it became necessary, in 1994, to reorganize the company into four business groups: automotive and suspension components; chair components; diversified components; and lift system components. Says Marketing Manager Michael Schmidt, “We divided the products by market so each division could specialize in their respective industries and provide better customer service.”

Indeed, diversifying into new markets has been an auspicious move for Suspa. One market, in particular – the office seating industry – has been especially successful for the company.

“We came to this area [Grand Rapids] originally to be close to the automotive industry, but locating in the heart of the office furniture industry has proven to be the key to our success,” said Erina Hanka, Suspa’s departing president and original employee. “We supply to all the major office furniture companies in West Michigan.”

In the late 1960s, Suspa had developed the first self-supporting gas spring with an integrated valve, which made infinite height adjustment possible on swivel chairs. Suspa’s gas springs are used by such industry giants as Steelcase, Herman Miller and HON. According to Schmidt, Suspa has captured 33 percent of the world market for height adjustable chairs.

Suspa remains at the forefront of research and design in the gas cylinder industry, keeping pace with the steadily increasing need for work-station adjustment. One of Suspa’s newer products is a lift system called MOVOTEC, which uses hydraulics to raise and lower a variety of work stations, including telephone operator stations, hospital surgical tables, industrial workbenches and conveyor platforms.

Suspa’s future success lies in continued attention to customer service and further diversification, according to Schmidt. Suspa prides itself on delivering its products on time with the highest levels of quality and customer service. To accomplish this, Suspa fosters an atmosphere of teamwork and cooperation among its employees. Professionalism and understanding are reinforced through cross-training, continuous improvement and work exchanges where office, plant and sales staff gain insight into each other’s responsibilities. “You can only have a good product when you have good people,” says Hanka, who is retiring this year after 25 years with the company. “We ask our customers to lean on us for support and we strive to be each customer’s supplier of comparison as part of our mission statement. But our challenge is to make our customers competitive in their markets by solving their problems.”

Those markets are steadily expanding as Suspa continues to diversify. One of the company’s newest markets is the home-washing machine industry, for which it produces suspension systems. To accommodate such customers as Whirlpool and Maytag, Suspa broke ground in 1999 for a 20,000-square-foot addition to its manufacturing facility in Grand Rapids.

In the process of expanding, Lohage would like to increase the company’s “glocalization” – the company’s word for global thinking combined with local acting. Even as Suspa becomes a leading player worldwide, it will remain the “corner store” for lift, support, damping and adjustment devices.