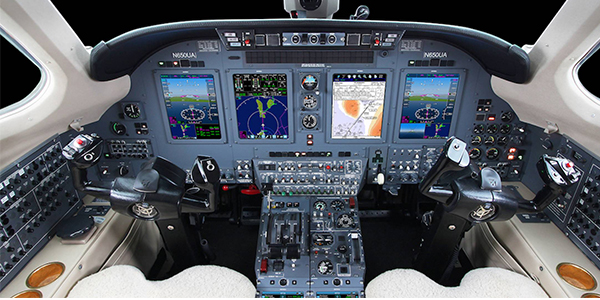 Fed up with having to operate the maze of cockpit display units found in a typical corporate aircraft, veteran pilot and entrepreneur Hubert Laurenz Naimer developed a mental blueprint for a more efficient flight management system (FMS) during his frequent transoceanic flights. His system would consolidate an aircraft’s individual flight control display units into a single master navigational system with FMS capability. “The whole concept of FMS is to make life easier for pilots,” he said in a magazine interview.As he conceived it, the system would be capable of accepting inputs from a variety of position sensors, and would include provisions for accepting any new types of sensors in the future. Equipped with an accessible and large display, the navigation system would have a self-explanatory interface with the pilot. Its operation would be independent of environments and phases of flight, and it would provide guidance outputs in three dimensions. Capable of flying all required procedures and maneuvers, Naimer’s system would also include fuel management and radio tuning.

To realize his vision, Naimer, who has a background in electronics engineering, launched Universal Avionics Systems Corporation in 1981. Assisted by a team of experienced engineers, Naimer de-signed and produced the UNS-1, the first multisensor Flight Management System for the corporate and commercial aviation marketplace. An instant success, the sophisticated yet simple UNS-1 set an industry standard for business aircraft throughout the world.

The UNS-1 systems have since been certified at nearly all business aircraft original- equipment manufacturers, on such models as Astras, Citations, Challengers, Falcons, Gulfstreams, Hawkers, King Airs and Learjets. The systems are also installed on numerous regional airline aircraft. In addition, Universal Avionics has captured a major share of the retrofit market.

A Series of Firsts
With its groundbreaking UNS-1 design, Universal Avionics established a long-standing reputation as an avionics innovator. The UNS-1 was the first system to provide sensor integration. It was also the first to use solid-state memory to store a worldwide navigation database, and to use diskettes for updating the database. Universal Avionics also led the industry in offering corporate flight management systems with flat-panel color displays.

Today, the Tucson, Ariz.-based company, headed by Naimer and his son Ted Naimer (also a pilot), continues to be an industry leader in avionics advancements. Conceived, designed and tested in the cockpits of Universal aircraft, the new UNS-1 models feature the power, speed, memory and interface capabilities to take advantage of advancements in the communication, navigation, surveillance and air traffic management operating environments.

Over the years, Universal Avionics’ product line has expanded. Its innovative offering has the unique distinction of having been designed by pilots. Not surprisingly, aircraft operators have communicated their overwhelming acceptance of Universal’s products by rating the company first, with the most satisfied customers, in Professional Pilot magazine surveys conducted in 1999 and 2000.

Among the company’s expanded line of products is UniLink, a communication management unit, which provides a powerful air-to-ground, two-way data link for the UNS systems. It enables pilots to benefit from the advancements in communication and routing available in worldwide air traffic management networks.

Another product is Universal’s cockpit voice recorder – which was the first in the industry to store audio in solid-state memory. With no moving parts, the recorder requires no routine maintenance, making the former tape units obsolete.

UniVision, Universal’s flat-panel cabin display/information/entertainment system, is another first in the industry. A full-featured multimedia system for the aircraft cabin, UniVision offers quick access to a wealth of information, unique advanced control and presentation capabilities, plus air-to-ground communications.

Safe Systems
From the beginning, Universal has dedicated its resources to increasing flight safety by reducing pilot workload and by enhancing pilot situational awareness. The company’s newest product, the Terrain Awareness and Warning System (TAWS) increases situational awareness by providing visual terrain information relative to current and predicted airplane position. It also provides alerts well in advance of potential hazards.
“The system contains a worldwide terrain data base,” says the manufacturing division’s general manager, Steve Pagnucco. “When the system is provided with the aircraft’s position and altitude, the pilot is provided with a high-resolution, three-dimensional image of terrain around the aircraft. Terrain at or above the plane’s altitude is color-coded red, providing the pilot with exceptional situational awareness. This is a significant enhancement over the current technology. It’s in the process of being certified, and will be available this summer.”

At a time when many avionics companies are outsourcing their circuit board assembly, Universal Avionics Systems Corporation has expanded its manufacturing capabilities. In May 1999, the company completed construction of a new 60,000-square-foot facility adjacent to its corporate headquarters and its marketing and product support division in Tucson. This state-of-the-art plant features the latest in circuit board assembly, final-unit assembly and environmental test technology.

“We’re bucking the industry trend of outsourcing” says Pagnucco. “The advantage is that we completely control all aspects of quality, reliability and on-time delivery of the boards. Given the critical nature of the product – it essentially flies the aircraft – quality control from start to finish is extremely important. Electronic routing, defect collection and real-time statistical process control systems allow us to collect a tremendous amount of data and to analyze it quickly to improve processes. Highly accelerated stress screen (HASS) techniques help us to shake out any latent defects before our products hit the field.”

Designed for Growth
Explaining the strategy behind the construction of the new manufacturing facility, Pagnucco says, “We’re certainly designed with growth in mind. We’re running a one-shift operation now. But we have the ability to easily add shifts to increase capacity. Thirty percent of the manufacturing floor space is also open for growth and expansion.”

In addition to manufacturing and marketing operations in Tucson, the company runs a research and development division in Redmond, Wash., and an instruments division – which produces flat-panel displays – in Atlanta.

What’s next for Universal Avionics Systems Corporation? “Continued expansion and the introduction of exciting new products,” says Pagnucco.
Indeed, the company seems to be an unlimited source of new ideas for making a pilot’s job safer and easier.