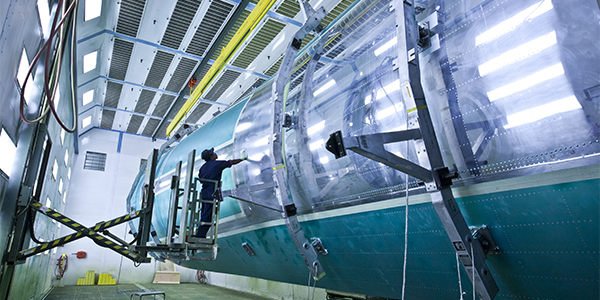 Triumph Group, Inc., a global leader in hydraulic and mechanical aviation components, is on its way to becoming a billion dollar company.

When terrorist attacks in 2001 chilled airline travel, ripple effects put a damper on the entire aerospace industry, slowing the relatively young company’s ascent. But Triumph is back on the runway.

“We’re moving at a good pace again with aggressive plans for acquisitions as well as organic growth,” says Brian Robertson, Vice President, Marketing, of the Triumph Aerospace Systems Group, the larger of the corporation’s two divisions, accounting for about 80 percent of $760 million in annual revenue.

“Our goal is to become a billion-dollar company,” Robertson says. “We were doing well until 9/11. That slowed down everyone for a while but we’re seeing strong growth again in the industry. Our company is exceeding 10 percent growth per year.”

Spreading the name
Triumph Group is comprised of more than two dozen separate companies with four locations and 4,500 employees worldwide. Until recently, many of those companies retained their own names. This year, a decade after the company’s initial public offering in 1996, Triumph completed the process of renaming all the separate companies with the Triumph brand.

The company serves a broad spectrum of the aviation industry, including commercial and regional airlines, air cargo carriers, as well as original equipment manufacturers of commercialregional, business and military aircraft and aircraft components. Boeing Aircraft is Triumph’s largest customer, accounting for more than 20 percent of the company’ revenues. Airbus is second largest, accounting for about 5 percent of Triumph’s revenues.

“The arrival of the Euro and its current relationship to the dollar makes European expansion attractive,” Robertson says. “We’re expanding our international focus globally, but Europe especially looks good.”

Triumph Group has footholds in France and Ireland with more acquisitions in the works. Triumph also is opening sales and aftermarket services offices in Bangkok, Thailand to help develop the Asian market.

Acquisition strategy
“We think we have a fairly unusual and so far successful strategy as far as our acquisitions go,” Robertson says. “Of course we’re looking for successful companies with good potential like any corporation would, but where Triumph differs is what we do after the deal is consummated. A lot of companies come in and do a wholesale management change, putting their people in. We try to make sure the current successful management structure stays on for as long as possible.

“We figure they must have been doing things right to get to the point we were interested in them. We look at the people as part of the investment and the greatest assets. We try to take some of the overhead costs away and let them keep doing what they do best. So far, it’s working well,” Robertson says.

Triumphant history
Triumph Group’s modern history begins with incorporation in Delaware in 1993. The company has been under the stewardship of President and CEO Richard C. Ill since its founding. He orchestrated a successful management buyout of Triumph Group in 1993.

The Aftermarket Services Group specializes in designing and building precision investment castings of super alloys, titanium and aluminum alloys for aerospace engines using constantly evolving technology, materials and techniques. In addition this group provides a full range of services for the aerospace industry, including hot-pressing, heat-treating, machining and thermal coating.

“Here’s an example of one of the things going on in the industry right now, part of a move toward better integrated efficiencies – Boeing wants to build a three-day 787,” Robertson says. “This type plane now takes several months to build – Boeing wants to do it in three days. It involves all kinds of rethinking, like air-ferrying parts overnight instead of surface shipping the old way, which might have taken two months.

“It’s a lofty goal, but if you don’t set the bar high, you won’t know how far you can go, “There are new materials, new processes, new demands all the time in the aerospace industry,” Robertson says, “and we intend to be at the forefront every step of the way.”