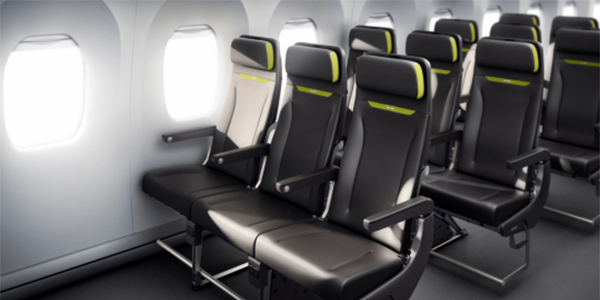 In November 1999, Recaro Aircraft Seating, a world-famous producer of aircraft seats, set up shop in the United States. This move enables the Germany-based company to better focus on the burgeoning U.S. market. With over 36 employees and 61,000 square feet of manufacturing space at their leased Fort Worth, Texas, facility, Recaro is capable of turning out 30,000 seats annually to serve the American market including Recaro’s customers, American Airlines and United Airlines.

“The company in the United States is undergoing constant growth,” says Exec-utive Vice President Sven Achilles. “With more and more contracts, we will grow to a new level. We’ll have a second company with the same turnover and the same number of people as in Germany.”

As part of the company’s strategy for growth, Recaro is operating a kind
of exchange program for its American and German engineers with an eye toward building a design and engineering division in the United States “Hope-fully,” says Achilles, “we’ll have our own modeling shop in the U.S. within one year.”

A Company Gets off the Ground
Recaro Aircraft Seating, Inc. is one of three independent operating divisions of the Keiper Recaro Group, a privately held German company. Formed in 1908 by the Reutter family in Stuttgart, Germany, the company started out as a specialty car body manufacturer which also produced the first limited serious of Volkswagen Beetles for Porsche. In 1963 Reutter became Recaro GmbH & Co.

Today, with worldwide sales of more than $150 million and a total production capacity of 120,000 seats per year, Recaro is one of the most recognized aircraft seat manufacturers in the world.

“The 1998 and ’99 business year has been of strong growth for the company which develops, manufactures and markets aircraft seats worldwide,” reports Chairman of the Executive Board Hans-Dieter Abt, in a recent company release. “The key to Recaro Aircraft Seating’s success lies in solid engineering and production along with the integration of innovative concepts.”

Upgrading to First-Class
Indeed, the past financial year was distinguished by high market acceptance and impressive growth for Recaro Aircraft Seating. Already the world’s leading manufacturer of economy-class seats. Recaro is moving into the business-class market with innovative, technologically advanced concepts. “Our philosophy when we started the company was to perfect the coach seat, then move on to business and other classes,” says Achilles.
Recaro has set its sights on the business-class segment with its newest seat which features such exclusive first-class comforts as a 10.4-inch monitor (optional 12.4 inches); 137-degree seatback recline; electrically adjustable leg and foot rests; reading light; removable headrest; lumbar support; memory function for upright, sleep and work/dining positions, along with a self-explanatory seat-adjustment control panel. Customer options include a massage system and seat heating. In addition, owing to consistent lightweight construction technology, this new seat weighs significantly less than comparable products.

Introducing A New Travel Class
Confirming its reputation as a trailblazer in the industry, Recaro recently introduced a new travel class to the market with its “Premium Traveller.” This seat is an additional class for long-haul aircraft aimed at the business traveler and the demanding tourist. With such amenities as in-seat telephone; in-seat power for lap-top use as well as for a variety of audio and video equipment, this new seat provides all the features of an office in the air. On the comfort front, the seat has much more living space, a wider seat, as well as adjustable lumbar support and headrest and leg and footrests. Based on the concept of the “Premium Traveller,” Recaro developed in close cooperation with British Airways its “World Traveller Plus.” This seat is patented British Airways Design with which the airline launched a new cabin, making BA the first major airline to offer four distinct cabins.

Gearing Up for Growth
In response to its remarkable growth, Recaro has implemented a number of important improvements recently. Last year, the production capacity at the company’s Germany headquarters was expanded to over 172,000 square feet with 10 state-of-the-art assembly lines. Additional, highly qualified employees was hired.

In working with customers, Recaro has always concentrated on smooth communications, maximum production flexibility and comprehensive on-site service. With the U.S. facility Recaro is providing worldwide product support and technical services at two locations here, two locations in Germany, one in Singapore and one in France.

To meet the growing demand for its products, the company opened a technical center, known as the “Black Box,” at its headquarters in Schwaebisch Hall, Germany last March. The new building offers space for offices and showrooms, as well as for engineering, design and testing.
Finally, the company’s recent move to the United States provides additional production capacity for its American customers. “We’re here because of the potential American market,” says Achilles. “We expect a huge run on new business-class seats in the near future.” According to Achilles, the U.S. location will enable Recaro to respond to customer demand worldwide notwithstanding time zones. “Our goal here in the U.S. is to grow in a very healthy way,” says Achilles. “We are prepared to expand. We’ve chosen a location with enough space for two years of growth, and we have the possibility to move to a larger facility in the area if necessary.”