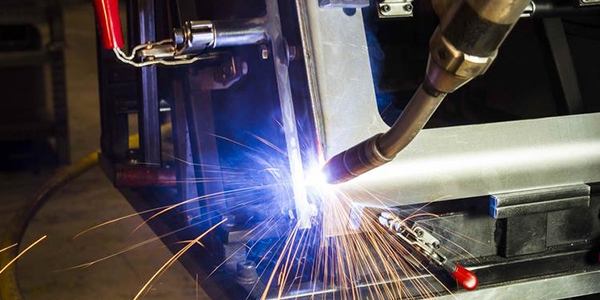 Steelcraft Manufacturing Company has made good under a number of different owners, and is poised for further growth in a highly competitive market.

Founded in 1933 as a building products distribution company in downtown Cincinnati, the company’s prosperity turned into dramatic growth in 1942 when the company began manufacturing building products like doors and steel casement windows. Back then, much of the growth was triggered by government contracts during World War II. The contracts revolved around construction of prefabricated steel buildings, various ship and aircraft parts, pipe rails and bailey bridges. The war and the contracts helped fuel the company’s emergence; in 1946 it purchased a 32-acre site in suburban Blue Ash, Ohio, and built a 20,000-square-foot factory space.

Still headquartered in Cincinnati, the company now has two manufacturing plants: one in Cincinnati and the other in Pamona, Calif. Combined, the two facilities total 580,000 square feet, including warehouse space. The company employs approximately 1,000 workers in the two plants and in sales offices around the world, according to Al Urbaniak, the company’s senior product manager.

In 1959, the company sold its metal building division to Inland Steel Products Company. American Standard in 1969 purchased Steelcraft from the original owner, and sold it to Masco Tech in 1988. In 1996, Masco sold the business to Ingersoll-Rand Architectural Group. Today, Steelcraft products are distributed in the United States through 29 offices. The products are also sold overseas in what the company describes as a “rapidly growing market.”

Perhaps one of the biggest events since Ingersoll-Rand purchased Steelcraft occurred last February, when the corporation announced it had restructured and renamed its Architectural Hardware Group as the IR Security and Safety Sector. The changes are designed to further strengthen the commercial business’ evolution from a project-oriented operation to one that provides a total solution of service that is aligned with customer needs. “Customers expect us to be more united in our approach to selling, product design, delivery systems and after-sales service – and this structure will enable us to deliver world-class solutions and services, and to continue to earn customer loyalty and preference,” says Chuck Havill, president of the commercial security and safety area.

One of the most important changes in the operation is making maximum use of its marketing, product development and operations across all brands, including Steelcraft, according to company executives. Its sales operation, which sells products through independent and direct factory sales representatives, will continue, according to Dave Sylvester, vice president of commercial sales and marketing. Providing world-class manufacturing, product development and engineering, order fulfillment, delivery and service are also part of the new unit’s goals, according to Scott Duncan, vice president of commercial operations.

Through it all, Steelcraft has maintained its focus on distinctive steel doors and frames for commercial construction. Its series of doors are available in all sizes, styles and finishes. The doors are typically made of cold-rolled steel in gauges that range from 20 to 14. Optional metals and finishes include hot-dipped galvanized steel, stainless steel, textured steel and many factory finishes. The company also makes a steel door that can take a conventional, oil-based stain to create a wood appearance but maintain the qualities of steel.

Another part of the company’s product line is door frames available for 13/8-inch and 13/4-inch doors. The frames can be knocked down for field assembly or set up and arc-welded. The frames can be used in masonry, wood stud or steel stud walls. They are available with fire ratings ranging from 20 minutes to three hours, and are thoroughly washed, phosphatized and prime painted. The F series offers frames in steel gauges ranging from 18 to 14. The DW and K series doors offer 18- and 16-gauge steel.

Frame sections are available to produce exterior walls, store fronts, entrances and walls, interior partitions and much more, according to the company. The sections are basic steel-frame components designed to provide the strength to carry the wind or dead load. The components are cut to size, notched or mitered, and welded together into an assembly. Each section is cleaned, phosphatized and prime painted, the company says.

Label doors are also available from Steelcraft. They come with fire ratings from 20 minutes to three hours and in the same finishes as non-label doors. The company makes three-sided and transom frames with panel and without transom bar. They are available knocked down or set up and welded. Transom frames with transom bars, borrowed lite frames andtransom sidelite frames must be set up at the factory. Label frames have a standard 2-inch face.

Also, doors and frames are available with listing frames and classification marks from Underwriter Laboratories, Inc. The company also makes doors that conform to both positive-pressure and negative-pressure test criteria. They are used in areas that do not require positive-pressure fire doors and frames. The doors include the L series with a honeycomb core, B series steel-stiffened door, T series temperature rise, A series stile and rail, and CE series embossed door.

As the company is in a market with some 100 competitors, Urbaniak says the need for all departments to work as a team is critical: “That is why we look at our goods, service and support as one product. It helps us meet the customer’s demand for products that are available with quick order entry and fulfillment.”

Besides automating its manufacturing plants, Urbaniak says, the company is turning to the Internet as part of its rapid delivery program. “We are building a Web site for ordering,” he says. “We also have a separate site that our distributors can access with a password. We expect our use of the Internet to expand quickly.”

The company says it has enjoyed strong sales over the past several years. For this year, Urbaniak says, “we are looking at slightly more than a flat market. It is what we have been expecting. The market has been strong for a long time and has to slow down a little bit.” Nonetheless, he says, “we are optimistic about the future. We are looking at very good growth in the industry.”