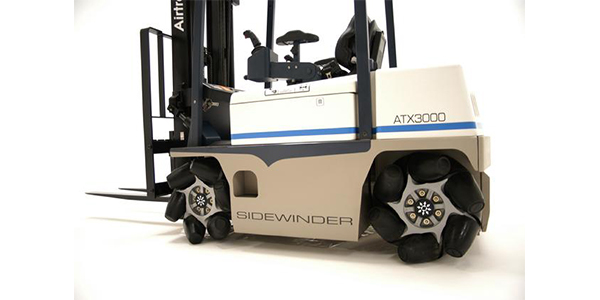 Airtrax Corporation of Vineland, N.J., is developing commercial and military applications for an omnidirectional vehicle drive system. This technology provides vehicles with the capability of forward, reverse, sideways, diagonal and rotational movement. The reducers (transmissions), provided by Lenze Corporation, are sealed for life and virtually maintenance free.

The company’s prototype omnidirectional rider forklift was the major attraction at Pro-Mat 99, the materials handling trade show in Chicago. Industry professionals watched with great interest as the truck was moved in every direction by an operator who maneuvered with a joystick and rotated the vehicle 360 degrees in its own footprint. Additional flexibility was demonstrated as the upper forklift assembly was retracted to an overall length of only 84 inches, making it capable of narrow-aisle use. The show-stopping demonstration also showed that, even when fully loaded, the omnidirectional vehicle powered by four 5-horsepower alternating-current motors, could climb over a 4-inch obstacle.

The ATX Series forklifts can travel forward and reverse at speeds exceeding 6 miles per hour or sideways at more than 2 miles per hour. Optional speeds to 8 miles per hour can be programmed into the vehicle’s computer. The four drive motors use battery power based only on the horsepower they generate. The Superdrives and Canion control systems provided by Atlas Copco allow the motors to use power on the basis of linear need. For instance, if a motor draws 80 amperes to generate 5 horsepower when only 1 horsepower is needed, the draw will be 16 amperes. In the case at hand, the ATX Series draws less than 25 amperes to move a fully loaded vehicle up to 5 miles per hour, forward or reverse. This extends the time between battery charges.

A Versatile Product Line
The ATX Series includes models with 3,000,- 4,000-, 5,000- and 6,000-pound load capacity. The first production models of this product family will roll off the assembly line during the second or third quarter of this year and will be sold through dealers. The ATX E-Series will be introduced later, with an upper assembly capable of retracting to an overall length of about 84 inches, 36 inches less than the non-extending ATX Series length of 120 inches. This permits the load to be centered over the four wheels, and allows sideward travel down narrow aisles or through doors as narrow as 8 feet.

The Airtrax DireXtional wheels
consist of a rotating steel frame (hub) supporting multiple freewheeling, keg-shaped urethane rollers. The wheels are driven in a coordinated manner by a microprocessor that converts the operator’s joystick speed and direction commands into the appropriate wheel motion. The wheels have less scuffing than conventional steered wheels. There is no axle or conventional steering apparatus. While a hard surface is preferred, it does not have to be perfectly smooth since the ATX forklift can climb in an out of potholes and over 4-inch obstacles. Whatever the surface — concrete, macadam or gravel — it can make turns of 45 and 90 degrees or travel sideways without turning at all. Safety features include an automatic reduction in top speed by 50 percent when the load is raised to 7 feet, and by 75 percent when the load is raised to 10 feet in height.

Airtrax states in its literature that it considers its omnidirectional designs as “virtually unmatched in the present marketplace.” And the company does not intend to limit its technological advantage to the forklift market. “We believe that Airtrax ‘omni’ technology will revolutionize the materials handling industry,” states Peter Amico, Airtrax president and founder. “We believe omnidirectional technology can be applied to a wide array of products in health care, construction, amusement and other uses such as military aircraft weapons loading.”

Join the Navy and See the Patent
The omnidirectional wheel was originally patented by Swedish inventor Bengt Erland, who sold the rights to an American corporation. The patent was later purchased by the United States Navy, which advanced the technology. The Navy held the patent until its expiration in 1990, and continues to conduct basic re-search in this area, having entered into a cooperative research-and-development agreement (CRADA) with Airtrax in 1996.

In January of 1999, the company demonstrated its prototype ATX Series forklift for Navy personnel at the Hilton Hotel in Arlington, Va. The forklift was put through its omnidirectional paces on a plush carpet to prove that its wheels would not harm the non-skid decks of the fleet. Airtrax has recently been advised that the Navy intends to buy four omnidirectional forklifts for sea and land trials this year.

Last year Airtrax was awarded a Phase I Small Business Innovation Research contract by the Navy to design an omnidirectional weapons transporter for shipboard use. In announcing the contract, Airtrax Executive Vice President Barney Harris said, “Navy ships are literally designed around the ability to move material within — designed around the lowly fork lift truck. The incorporation of omnidirectional technology will enable the Navy to design more efficient and cost-effective ships since less internal volume must be dedicated to material handling.”

The Phase II contract, if awarded, would call for the development of two prototype omnidirectional vehicles (MP2 for multipurpose military platforms) for handling munitions and ordnance, or for the installation of aircraft engines to replace the aging vehicles that now move ordnance and supplies on board the carriers.

Power Choices
Airtrax recently completed a feasibility study for its Hybrid Power Supply Module, which will enable any electric forklift to run on a hybrid of fossil fuels and battery power. The module is housed in a battery box with weight and appearance similar to the standard forklift batteries it replaces. Each module contains a generator coupled to a specially designed battery, and uses microprocessor based controls. The operator can switch between all-electric or hybrid power to suit the environment in which the machine operates. Clean, silent battery power can be used when operating in a pollution-intolerant area; and the hybrid power supply module’s integral generator can be used to top up the battery’s charge when operating in open areas. The company now plans to include the hybrid power supply as an option on its omnidirectional ATX Series forklift in the later part of the year.

Wheeling in New Products
Airtrax has completed a preliminary design for an omnidirectional wheelchair, and has announced it is currently considering a joint venture and licensing arrangement with a major medical equipment company for the development of the wheelchair. The company also has plans to adapt the new technology for hospital bed designs with the same wheels and control systems. Amico says, “Based upon our preliminary design, the omnidirectional wheelchair will sell for a price very comparable to other high-end motorized units — but will have the added advantage that it can move in any direction at will.”

Airtrax, which outsources all manufacturing, focuses its energies on product research and development with its network of Internet-linked engineers, designers and suppliers. “Companies selling information technology and services using this business organizational approach are common,” says Amico, “but there are few, if any, whose purpose is to manufacture and sell heavy industrial machinery.” In addition to being the first to bring omnidirectional vehicle technology out of the laboratory and into marketplace, Airtrax will demonstrate to the world how to run a successful company using this business model.