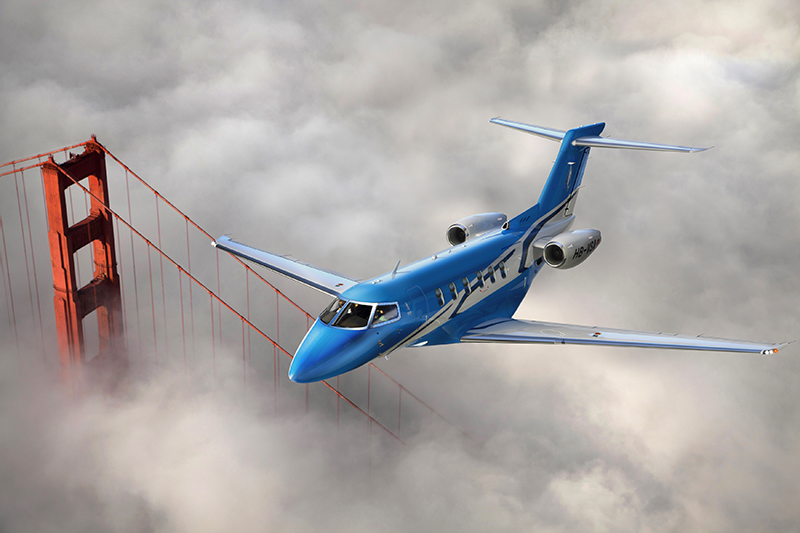 The expression “works like a “Swiss watch” signifies a combination of engineered excellence, mechanical precision, elegant design and sophisticated innovation. This same Swiss heritage is put to work in the creation of the PC-24 from Pilatus Business Aircraft Ltd., which reaches new heights with an entirely new category of aircraft—the Super Versatile Jet (SVJ).

The under $10 million PC-24 is the only aircraft of its kind that combines the utility of a turboprop with the cabin size of medium-light jet and the performance of a light jet. It is expected to compete with the Textron Aviation Cessna CJ3+ and CJ4 and the Bombardier Learjet 70.

Certified for single-pilot operation with a maximum cruise speed of 489 miles per hour, the PC-24 is designed for “off-road” performance, meaning it is capable of short takeoffs and landings (STL) from unpaved surfaces. So you can fly without worry about runway length (as short as 2,690 feet) to just about any airport in the world, especially smaller ones, and avoid massive administrative procedures and reduce ground transfer time to an absolute minimum.

The PC-24 can land and take off from dirt strips. Why would you want to operate a multi-million dollar aircraft on a dirt strip? Well, have you ever been to the Nabberby Station in Northern Territory in Australia, or the Copalis State Airport in Grays Harbor County, Washington? You could if you were flying the PC-24.

In fact, Pilatus saw the need for a jet that could do unpaved STL based on the success of its top selling PC-12 NG turbojet, of which nearly some 1500 are in operation accumulating more than 5 million flight hours. Pilatus listened to PC-12 owners and incorporated their experiences and desired features into the capabilities of a light jet. The PC-24 combines the mobility of short-performance with the luxury of stylish cabin space than provides easy reconfiguration to accommodate varying passenger and baggage compartment needs. Cabin volume of 501 feet with a continuous flat floor exceeds that of business jets costing twice as much. Six stylish color themes—named after world-renowned ski resorts including St. Moritz, Zermatt and Aspen—were created in partnership with BMW Designworks.

On top of that, the PC-24 is the world’s first business jet with a standard pallet-sized cargo door that facilitates quick and easy loading. And no other business jet in this class features a comparable, all-internal pressurized and in-flight accessible baggage compartment. All these features also make this business class jet ideal for use as a first-class ambulance aircraft that can accommodate up to three patients and the necessary medical systems.

It is not surprising that such an aircraft is made by Pilatus—the company was founded in 1939 to manufacture aircraft for use in the mountain regions of the Swiss Alps for the Swiss Air Force. Pilatus Business Aircraft, headquartered in Broomfield, Col. is one of two independent subsidiaries (the other is in Adelaide, Australia) of the Switzerland-based Pilatus Group. Founded in 1996, Pilatus Business Aircraft completes and customizes about 70 percent of all PC-12 series that come off the production line in Switzerland. It is also responsible for PC-12 marketing, sales and servicing activities in North and South America.

The latest PC-12 iteration—the PC-12NG— is one of the most popular turbine-powered business class aircraft on the market today. It features a 330 cubic foot pressurized cabin with seating for up to nine passengers, an interior crafted in partnership with BMW Designworks, a 285 knot cruising speed and, of course, STL unpaved runway capability.

Pilatus Business Aircraft will also do completions on the PC-24. Last year it broke ground on a new 118,00 square-foot building to perform final assembly and administration. Typically, Pilatus aircraft are finished in accordance to customer specifications and needs. Once the PC-24 goes into full production, the company expects to have 140 employees.

The body of the aircraft continues to be built at the Pilatus plant in Switzerland, which has expanded with a new, near assembly hall constituting a surface area of some 33,000 square feet, a new treatment center, and investment in new milling machines. Integrated milling is one of Pilatus’s core competencies, employing the use of highly complex four- and five-axis machining combined with its “Concurrent Engineering Process” to ensure fully involvement of machining specialists from the design phase all the way to manufacturing.

While the PC-24 is currently in the final prototype test phase, certification is expected in the fourth quarter of 2017. Currently there are 84 pre-orders for the aircraft. Demand is expected to be so high that dealers are limited to five airplanes up until 2019, and most dealers are already sold out. Olathe, Kan.-based KCAC Aviation, for example, will take delivery of its first of five PC-24s that have already been sold in late 2017. And it is already taking orders for 2020 production.

It’s no wonder then that Pilatus chairman Oscar J. Schwenk commented in a press release that, “The PC-24 is proceeding as planned and the results are very encouraging. The data [from prototype test flights] we have so far indicate that our Swiss business jet exceeds published performance figures. I am confident that certification will be achieved in the fourth quarter, and am naturally looking forward with immense anticipation to the moment when our first customers take delivery of their PC-24!”