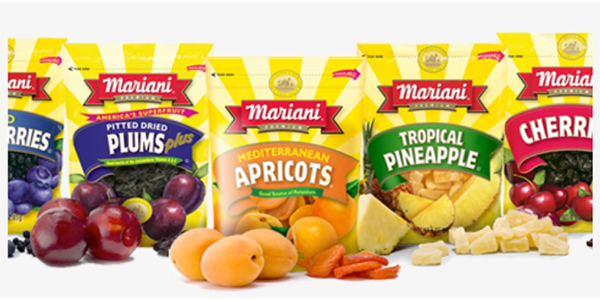 The statistics are heart stopping. Significant increases in the rates of diabetes, obesity and other related health issues are making today’s shoppers choose more health conscious food selections. Savvy consumers are on the lookout for healthy snacks they can easily incorporate into their on-the-go lifestyles. The Mariani Packing Company has the answer to those concerns and cravings. Nutritious, certainly delicious and high anti-oxidant treats are what Mariani does best.Over 125 million pounds of dried fruit is processed each year at Mariani, one of the largest independent dried fruit processors in the world. It is a global supplier serving some 24 countries and includes Wal-Mart, Kroger, Safeway and most of the major retailers throughout the world as its customers. Mariani is also a big ingredient supplier to such companies as General Foods, General Mills, Ralston … and yes, those raisins in your Raisin Bran – they’re processed by Mariani.

The Mariani Packing Company was founded in 1906 when Paul A. Mariani, Sr. set up shop among the fertile land of the Santa Clara Valley in Central California. He hailed from Yugoslavia, a Mediterranean region known for fruit growing and originally started his company as a farming operation. The beginnings were humble with the family growing most of its own fruit and packing it into wooden boxes for export markets.

Over the years, the company evolved into many different businesses and today is a multi-million dollar, fourth generation family-owned business. In 1979, Paul Mariani, Sr.’s grandson, Mark A. Mariani, became responsible for its legacy serving as the company’s CEO. Great grandson, George Sousa, Jr., serves as president. From the company’s solid foundation, both men have grown the business, which now leads the industry and is a dominant brand for quality dried fruit in the retail sector as well.

The company makes its home office in Vacaville, Calif., with four other processing sites throughout California, the largest having 18 acres under one roof. The family and its 350 employees continue to follow the vision set by Paul A. Mariani, Sr. and are committed to the early lessons of their predecessor: mutual respect, embrace change, continuous improvement and never compromise on quality

In the early 1940s, Paul Sr.’s son, Paul A. Mariani, Jr., developed for the first time a moist dried fruit product that did not have to be rehydrated at home. Through this innovation, the business grew and perfected working partnerships with major supermarkets throughout the country. It would mark the beginning of many Mariani innovations to come.

In the early 1950s, Mariani introduced the first fruit roll-up, first fruit nectar in a can, and had the first frozen berries merchandised in a store’s frozen foods section. A packaging phenomenon was introduced by Mariani in the early 1990s. That’s when the company became the first to come up with a stand-up, zip close bag “We actually forced the competition to go to stand up gusseted bags from the traditional pillow packs used previously,” says Jeff Freeman, executive vice president of sales and marketing for Mariani.

Mariani’s tropical line of snack products was introduced in 1998. Its Pineapple Tango mango flavored snacks were a hit and have become some of its best selling items. The company continues to build its tropical line today. The turn of the century brought the first vitamin fortified dried plum snacks called Plums Plus and Ultimate Apricot product – a softer, sweeter apricot enhanced with a fruit essence.

Mariani Packing Company offers a complete line of dried fruits including dried plums, raisins, apricots, peaches, pears, apples and mixed fruits. Other products include a variety of fruit pieces, fruit extrusions, pastes and other ingredient items customized to its customer’s special needs. “Our R&D Department is actively testing new fruits and applications,” says Freeman. “We’ve developed a special process patented by Mariani, in which raisins are infused with glycerin to seal in moisture. Perfect for cereals, energy bars and trail mixes, the raisins have a better feel in your mouth, a plumper juicier taste, softer texture and increased shelf life. We have also perfected rehydration technology to create a high moisture raisin. These raisins are plump, juicy, soft and ready to use for your baking needs.”

Along the way, Mariani has been recognized for its premium products, having won the gold medal for best tasting product from the Quality Institute International for seven of its offerings. (The Quality Institute International is an independent organization dedicated to honoring the best products in the marketplace. It reviews thousands of products each year, awarding Gold Medal honors to the single best brand in each product category.)
The company’s premium Ultimate Apricots, Berries ‘N Cherries, Harvest Medley, Mixed Fruit, Cranberries, Tropical Pineapple, Tropical Medley, Sliced Apples, California Apricots and Mediterranean Apricots have been voted best tasting products in their classes.

In 2004, Mariani achieved another milestone when it established operations in Thailand to support its worldwide brand development. It also launched a full range of products in Wal-Mart Asia eight months ago to excellent sales. Equally successful is its venture in Australia in which it launched seven items in the Woolworth chain, Australia’s largest retailer with 60 percent share of the market.

Mariani is also becoming more involved with club stores like Costco and Sam’s Club. Additionally, it is exploring emerging businesses in the vending and convenience store areas. It recently partnered with 7-Eleven to stock its products in 4,000 stores and is doing test trials with vending operators.
The company also recently launched a wild blueberry product in Costco stores to outstanding results. The blueberries are harvested from the Northeast and Canada. “You can use this product for snacking or baking,” says Freeman. “It’s a really hot product now with all the press there has been about blueberries being a high antioxidant fruit. It’s really one of our most popular products at the moment.” Another new favorite is Mariani’s 100 percent fat free apple chips in three flavors – original, cinnamon and caramel. “These are not fried but vacu-dried,” says Freeman. “It is a proprietary product we’ve developed with one of our suppliers and I think it will prove to be quite popular with consumers.”

With innovation firmly ingrained in the employees of Mariani, and its customers coming to expect such innovation from the company, the road ahead certainly looks bountiful. “People are just looking for healthier, on-the-go snacks and we’re creating products to meet those needs,” says Freeman. “We welcome the opportunity and hope to continue to be a leader and innovator in this industry. And if we can help people eat healthier and make better choices along the way, we’re thrilled to be a part of that.”