Handheld 3D scanners have many applications across industry in sectors as diverse as automotive, aerospace and the manufacture of life-saving medical devices, but just once in a while, 3D scanning plays a role in something that’s truly magical, like the creation of a work of art. This was the case when T3DMC collaborated with Shropshire-based sculptor, Jacob Chandler to help him transform his ideas into reality, a reality that in this case was a towering steel and bronze sculpture weighing hundreds of kilos! 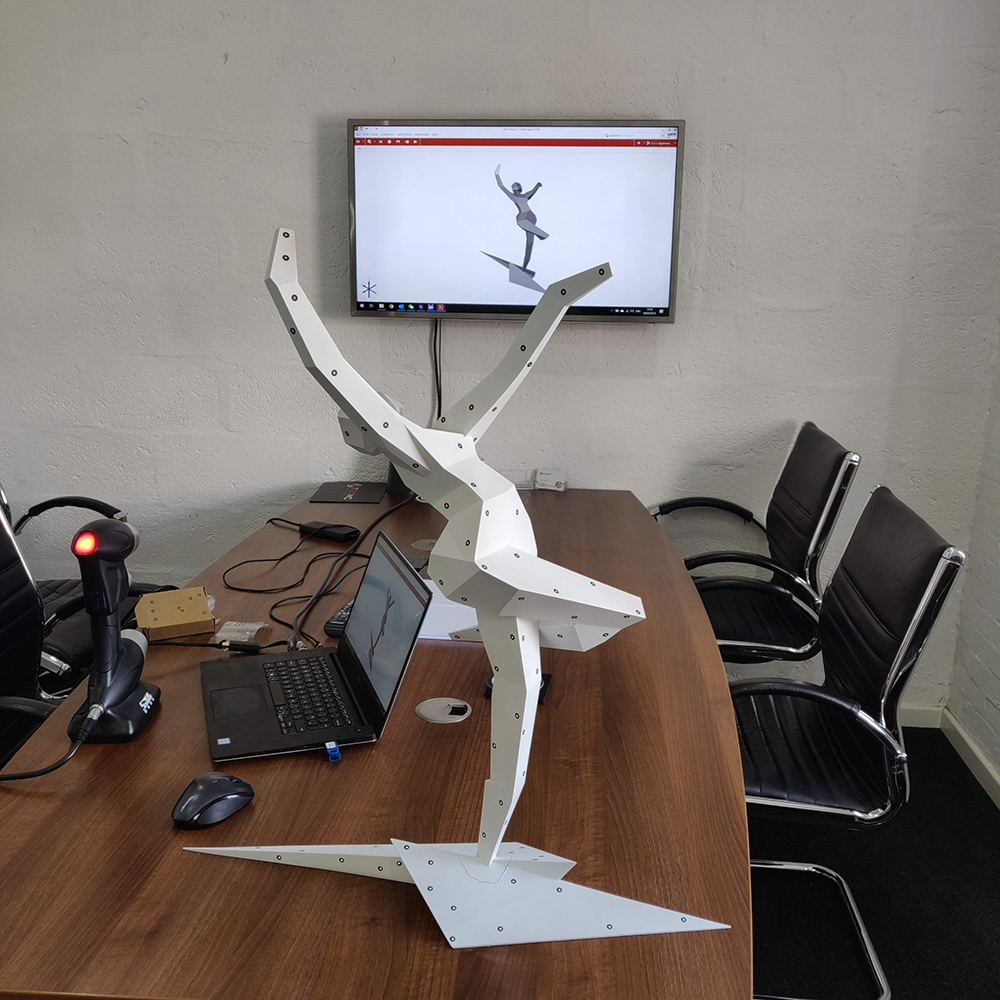 Jacob employs creative techniques in his artworks, which he often fabricates from wooden panels used in conjunction with sandable resin to form crisp-edged, smooth-faced and multi-faceted sculptures. This unique style has led Jacob to gain recognition in the art world locally and internationally. After just a few years of working professionally, he has exhibited in major cities across the globe, been highly commended by Royal societies, and is currently undertaking two major public commissions and a large scale private commission.

T3DMC’s collaboration with Jacob started two years ago when, after his proposal was selected from dozens of others, he was awarded an important commission by Telford Centre. His first step was to produce a 2D rendering which he then transformed into a 3D prototype made from wood and resin.

“The prototype was an 80 cm tall sculpture that aimed to capture the joy of movement at a point of change,” Jacob explained. “The piece is titled The Dancer, and I made the prototype to ensure it had the right energy and refinement and to prove the concept before work started on the finished sculpture, which was to be over three metres high and fabricated entirely from metal. To produce the sculpture, I needed 3D scans that would capture every detail of my prototype. Accuracy was essential to ensure that the metal panels I would be using in the artwork were right the first time. T3DMC did a great job of helping me to deliver my vision – with a small handheld scanner they gathered all the data I needed in only a couple of hours.”

T3DMC used the latest in portable handheld 3D scanning technology to capture accurate and comprehensive dimensional data for the prototype. The scanner’s probing function was particularly useful, as it made possible the measurement of hidden points and features. The scanner’s blue laser mode captured extreme detail with 10-micron resolution, while the red laser mode made the capture of overall scans fast and easy.

“We used a handheld 3D scanner because we needed the flexibility of movement – much like Jacob’s Dancer. We needed to be able to get into all tricky areas of this beautifully complex piece”, explained Adam Stanley, Managing Director at T3DMC. “Our large volume 3D laser scanner was the perfect tool for the job and we were able to scan every detail of it very quickly, including the challenging areas underneath and the small crevasses. The result was a highly accurate 3D file which was then reverse engineered into a computer-aided design (or CAD) model. This model was then directly used in the manufacture of the metal panels for the sculpture with great accuracy and efficiency.”

After the individual metal pieces were laser cut, they were shipped back for assembly.

“Getting accurate 3D scans of the prototype helped everyone involved understand the project and work towards a common goal,” added Jacob. “Thanks to T3DMC, accurate and comprehensive data for the sculpture was readily available. This meant that there were no significant issues during the manufacture and the installation of the sculpture, which is now on public display in Telford.”

The Dancer by Jacob Chandler was unveiled to the public at the end of 2019 and marks the new entrance to the fashion quarter in Telford. The three-metre high piece, which was fabricated from sheet bronze with a core of stainless steel, has quickly become a landmark for the town.