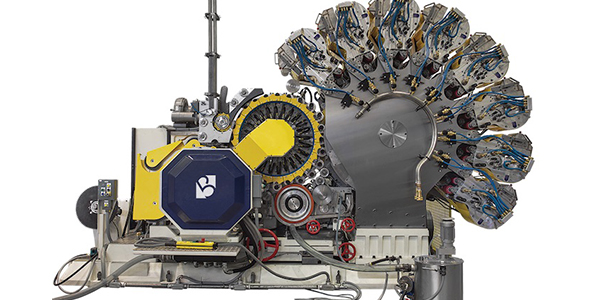 Belvac Production Machinery Inc. leads the world in the manufacture of precision machinery for the can-making industry.

Every day, as millions of people around the world raise up their ice-cold beverage cans, they are unwittingly toasting Belvac Production Machinery Inc. of Lynchburg, Va. Why Belvac? In all probability, the company’s machines had something to do with the creation of those cans. An estimated 175 billion beverage cans are processed each year on Belvac machinery. The 400-employee company leads the world in the manufacture of precision machinery for the can making industry.

Putting It All Together

The creation of a beverage can is not as simple as you might think, says Bob Glass, Belvac’s marketing manager. A systematic series of steps must be accomplished to produce a final functional can. At its 120,000-square-foot manufacturing facility in Lynchburg, Belvac makes machinery to handle many of those processes.

Belvac’s innovative modular design allows numerous can-forming stages to be accomplished by one system. The modules bolt together in the same way Duplos toys snap together, explains Glass. Speed, flexibility and productivity are the benefits offered by the modular system. Designs can be expanded and adapted as customer needs change. Additionally, the one continuous operation afforded by the system reduces the damage that may occur when cans must travel along a track.

The functions performed by Belvac machinery include trimming, bottom-rim coating, necking, flanging, base reforming and reprofiling and inspection. For a better understanding of these processes, here is a look at Belvac’s role in the creation of a can. First, a continuous sheet of aluminum or steel is shaped into a crude can by a cupper and body maker. It then goes through a series of processes. Belvac’s trimmer trims the top of the can, making the can top uniform. Next, the bottom coater machine varnishes the can’s bottom to prevent rusting for a steel container and to aid in mobility through the plant’s track work. The decorator machine prints a label onto the can, giving it the distinctive look required by the beverage company. Next, the diameter of the can’s top is reduced by a necker. This procedure cuts materials costs, since the thicker top of the can with its pull top is more expensive to produce. A flange is then applied by the flanger in order to attach the lid or end onto the container itself. A reformer places a small groove around the inside of the dome of a lightweight can to strengthen it. This step is performed primarily on beer cans, which then undergo pasteurization, a process that exerts pressure on the can’s dome. Next, a reprofiler machine shapes the outside dome of the can so it can be stacked on the grocery shelf and in your refrigerator, and to reduce material required to manufacture the can. This process also strengthens the can. The final inspection process is accomplished by Belvac’s light tester, which searches out small pinholes and cracks, and by its vision system, which employes high-speed cameras to find various defects.

Nearly all the estimated 5,000 machines built by Belvac during the past 20 years are still operating. This fact attests to the strength of Belvac’s engineering and manufacturing. Only the best materials, the highest craftsmanship and the most exacting precision will satisfy Belvac’s manufacturing standards. In fact, Belvac was awarded ISO 9001 certification in 1998, a further confirmation of the company’s commitment to quality.

Providing its customers with innovative solutions, quality products and greater production efficiencies has contributed to Belvac’s longevity in the marketplace. Over the years, Belvac has introduced numerous breakthrough systems to the can-making industry, including a new system for shaping aluminum and steel beverage cans, and an innovative system for heat-transfer decorating of metal, plastic and glass containers. Belvac’s cutting-edge designs and processes have allowed its customers to increase line speeds and to improve quality and productivity, while significantly reducing materials costs.

According to Glass, “A typical higher-rate can line will produce more than 3 million cans a day. We’ve come out with machinery that’s very fast, so fewer lines are required. Faster machines mean tremendous savings. We are the benchmark in the industry for speed. Everyone else is trying to keep up with us.”

Belvac got its start as the Belgium Tool and Die Company in 1962. Founded by Alphonse Stroobants, a Belgian immigrant, the company specialized in high-quality precision machining. In 1975, the introduction of an advanced rotary can-cutting machine enabled Belgium Tool and Die to capture more than 95 percent of the worldwide market and to make the transition to Belvac Production Machinery. This trimming machine was more than twice as fast as any other existing machine, with a cutter assembly that could be exchanged in a matter of minutes, avoiding excessive downtime. So effective was this tool that it appealed to such demanding clients as Anheuser-Busch and the two largest packaging companies at the time, Metal Box of England and Toyo Seikan
of Japan.

Success with this product established Belvac’s credibility, allowing it, in 1978, to expand into related machinery markets with the development of a bottom-coating machine. In 1982, Belvac bought the Colorado Division of Irvin Industries, which was the established manufacturer of a necking machine licensed from Coors. Belvac then applied its extremely high standards and innovative improvements to the original Irvin design. The resulting Belvac Necker set production standards worldwide.

Since 1992, Belvac has been a Dover Diversified Company (NYSE-DOV) doing business in 43 countries, according to Glass. More than 60 percent of its production is sold to customers outside the United States. In Europe, Asia and South America, people are drinking from cans made on Belvac machines.

Belvac continues to expand its reach in the glo-bal marketplace. A recent agreement with Preferred Machining Brasil, Ltd., to produce Genuine Belvac Parts will enable Belvac to provide cost-effective solutions for its South American customers.