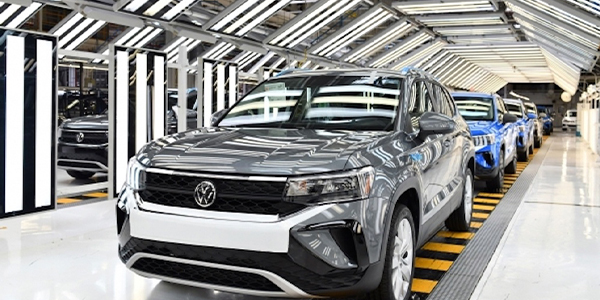 For more than 60 years Volkswagen has been the “people’s car,” with its Beetle manufactured in such volume that it has earned the distinction of being the most produced motor vehicle of all time.Born from the Rembrandt of automotive engineering, Ferdinand Porsche, its production is credited with helping to turn around the German economy following World War II. The Volkswagen Beetle has since made its way into automotive lore: it helped to define a generation in the 1960s and it’s bubble-nosed chassis won acclaim in movies (Herbie The Love Bug) and for its periphery attribute: it floats in water.
At Volkswagen Mexico, the New Beetle, one of three Volkswagen models manufactured at the plant, is given the same consideration to detail as it received in the days of “Ferry” Porsche and since it’s comeback, it has shown the automotive world that the Volkswagen can take center stage with the best the automotive world has to offer.

“VW has been present in Mexico since 1954, when the first Beetles were sold through an independent importer,” explains Vice President of Corporate Affairs and Strategy Thomas Karig. “As a subsidiary of Volkswagen AG, Volkswagen Mexico was founded in 1964. Production in the Puebla plant started in 1967.”

The following two decades were dedicated to supplying the Mexican market with VW cars. By the end of the 1980s, Volkswagen started to cover the North American market from Mexico with Golfs and Jettas. Today the Puebla plant is a global supplier for the Volkswagen group, with three models that are produced solely in Mexico for the world markets: the New Beetle, the Beetle Cabriolet and the fifth generation Jetta. “At the same time, the Volkswagen group has maintained its position as market leader in the Mexican passenger car market since 1968, achieving a 25.6 percent market share in 2004,” Karig says. The Puebla facility, according to internal quality audits, is ranked as one of the Volkswagen Group’s top factories worldwide.

Exclusive arrangement
A decisive milestone in recent years was the decision of the Volkswagen Group to produce the New Beetle exclusively in Puebla. Never before had the Group launched a new car in a factory outside of Europe. The success of this car has positioned Mexico as a global production site for Volkswagen. “Today, our Mexican plant is equipped with state-of-the-art production technology operated by a highly trained and motivated workforce,” Karig notes. “There is a definitive trend in Mexico towards specialization of production plants on models that are exported from here to all big markets. The free trade policy of the Mexican government in the last decade has made it possible to export and import automotive products to and from Mexico to all relevant world markets. This will remain the single most important investment incentive for the industry in coming years.”

Volkswagen«s Puebla plant has a production capacity of more than 400,000 vehicles a year. All assembly operations are located in the plant area; these include the car assembly from press shop to final assembly, an aluminum foundry, an engine plant and areas that assist the manufacturing of various axle and suspension modules. The current investment plan, including equipment and tooling for new models and general plant modernization, amounts to (US) $2 billion for 2003-2008.

To supplement the Volkswagen operation, 25 component suppliers are located in industrial parks next to the Puebla site. They employ about 10,000 people, in addition to VW«s 14,500.

In addition to production, Volkswagen Mexico is responsible for the marketing and sale of Volkswagen Group products in the Mexican market. “We offer to the Mexican customer a range of 13 distinct Volkswagen models, from the Pointer entry model up to the Touareg high-end SUV,” Karig says. “We sell the complete Audi and SEAT model range through dedicated dealer networks. In 2004, we sold 197,000 cars in Mexico, which makes this country the ninth biggest market worldwide for the Volkswagen group.”

Range of options
This year marks the 25th anniversary of the Jetta in North America. Since its introduction in 1980, this compact sports sedan has evolved significantly with each new redesign. The new Jetta retains the Jetta’s core appeal as a driver’s car, and offers more of everything that has made the Jetta a best seller.

Among its many features is the model’s first fully independent suspension system that uses a multi-link rear and optimized front axle, a more powerful base engine with a larger displacement of 2.5 liters and five-cylinders generating 150 horsepower (versus a four-cylinder, 2.0 liter, 115 hp engine in the previous model), a new optional six-speed automatic transmission with Tiptronic(r) and sport mode selection. In addition, later in the year Volkswagen will offer its revolutionary transmission called DSG (TDI, 2.0 liter and GLI), which is essentially an automated manual transmission system that offers the inherent efficiency and economy of a manual with the ease of operation of an automatic.
Major standard equipment for the newest Volkswagen includes front side thorax airbags, Side Curtain Protection(tm) (head) in the front and rear, and crash-active front head restrains, crash-optimized foot pedals that descend upon serious impact, Daytime Running Lights (DRL), three-point safety belts, and adjustable headrests for all five occupants. Front belts use pre-tensioners with load limiters, and all safety belts use emergency locking retractors.

The new Jetta has a list of performance items that can help avoid accidents in the first place. These include the stability and surefootedness of a precise-handling front-drive sedan, with standard four-wheel ABS disc brakes and a sophisticated new ESP(r) system that is standard on virtually all Jettas.

The solid basis for the new Jetta is in large part the result of its state-of-the-art production, which brings the Puebla plant front and center. Here, the Jetta’s assembly technology sets a new standard for this segment. Volkswagen AG has invested extensively to further advance the modern assembly sequences and technologies. The new Jetta has an even stronger body than its predecessor, recording double-digit improvements in its dynamic and torsional rigidity. This is achieved through the use of more high-strength body panels, world-class design, engineering, and advanced laser-welding systems that require a new-generation of robotics and elaborate laser driven measuring check points. The result is a dramatic increase in precise laser-welded seams – nearly 14 times more than the previous Jetta. The net benefit of this bonding process is a class-leading fit and finish, improved body strength, crash protection, driving dynamics, and reduced interior noise.

Volkswagen is offering the new Jetta with the 2.5 and later the TDI engines. Customers can select three core equipment levels with these engines, beginning with the well-equipped base-priced “Value Edition” priced at $17,900. In addition to the Value Edition, Volkswagen has two package levels that group popular equipment features together to best ensure timely delivery.

Good-bye old Beetle
Two years ago the last original-style VW Beetle left the production line at Volkswagen Mexico; it was given a festive farewell and marked the 21,529,464th Beetle to move off the assembly line. Workers gave it a rousing send-off and celebrated with flowers and mariachi music. When the production line was stopped it signaled the end to almost 68 years of success in automobile history. In recent years Mexico has been the only country in which the legendary Beetle, known in Mexico as the “Vocho,” was still in production.

In producing vehicles of such renown, Volkswagen«s Puebla plant aims to be one of the most competitive in the Volkswagen group. “We have the technology, we have a highly capable workforce and supplier base in Mexico, and we are constantly working on improving our quality and cost position,” Karig says. “Volkswagen Mexico«s production, sourcing and engineering capabilities are a cornerstone for the North American strategy of the Volkswagen group.”