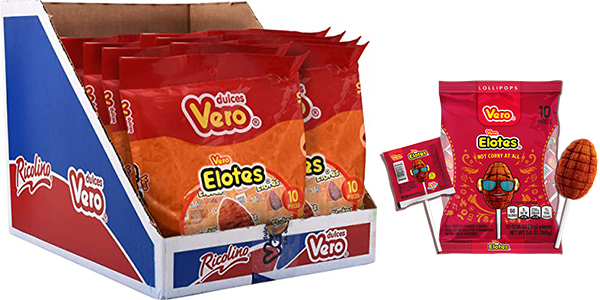 The confectionery market is highly competitive because of the constant variation in products and presentations designed to attract the attention of a fairly disperse segment: children. Customers with such a short attention span need to be constantly motivated with attractive products.

Some companies introduce new textures or new flavors, covers or fillers; others target different markets with the “nostalgia” ingredient. Such is the case with Dulces Vero S.A. de C.V., a company that manufactures, sells and distributes candy, lollipops, marshmallows, gummies and Japanese peanuts.

The company is located in Guadalajara, state of Jalisco. Founded by don Angel Ibarra Dávila and doña Maria del Refugio Robles in 1952, the first factory was called “Los Pinos,” (the pines). The company’s first product was a homemade yellow candy with a gummy consistency similar to nougat that was cut in small pieces and wrapped in different colored cellophane.

Fifty-four years later, the company is undergoing an institutionalization process, which involves fusion of 14 different companies including seven processing plants, transportation, packaging, and distribution units in Mexico and abroad. Out of 11 children from Ibarra’s family, six brothers are members of the group’s board. “The fusion is recent, it just started in December of 2005, and we still have a lot to work on, especially in redefining each company’s role,” said Francisco Rodríguez, commercial director.

The company’s slogan, “energía divertida” (fun energy), still addresses two important aspects of a marketing campaign towards children: the nutrition aspect, which is a concern to parents, and the fun aspect, without which there is little appeal to the little candy consumer.

The Guadalajara region was affected by a record drought between 1957 and 1959, which had a negative impact on the regional economy. The Ibarra Robles family moved then to Culiacán, state of Sinaloa, a beautiful region on the Pacific Coast and one of the most important states in terms of agricultural production.

In their new home, the Ibarra Robles continued with the same activity under the commercial name of “Dulces Gloria.” The company made bulk solid candy and few years later, it launched an over sized red candy lollipop with a wooden stick that became the company’s flagship.

However, in 1964 Jorge Ibarra Robles returned to Guadalajara and continued with the confectionery tradition of the family,opening the route for the family’s comeback to the region, which occurred in 1965. With new impetus, at the end of the 1960s the company established a sales trail throughout the Pacific coast from Guadalajara adding new products to its portfolio. Soon, the company adopted the new commercial name “Dulces Vero” after the Ibarra Robles’ granddaughter.

The 1980s was defined by the consolidation, building new plants, and aiming to vertically integrate while increasing product lines. Fourteen years ago, the company was ready to export products to the world. Dulces Vero participated for the first time – and continues to do – at the ISM, the International Sweets and Biscuits Fair, the leading trade fair for sweets and biscuits in retail packaging, and the trade event for bulk buyers of confectionery. Exhibitors from 73 countries and visitors from 123 countries are delighted every year with chocolate products, ice cream, fine bakery products, marzipan products, sugar confectionery, and snack foods.

“The fair opened a lot of doors for Dulces Vero. We are currently exporting to Arabia Saudita, Korea, Central, South and North America. Although we started exporting 14 years ago, our products have crossed the Mexican borders informally for 28 to 30 years through merchants and distributors,” explained Rodríguez.

The company has also participated in the All Candy Expo®, sponsored by the National Confectioners Association, the largest confectionery-only show in North America, a must-go for those involved in the confectionery industry. Because the expo is not opened to the public, it is a unique opportunity to buy, sell and network with industry professionals and decision makers. A total of 450 exhibitors and nearly 20,000 attendees participated at the 2005 event.

The company’s mission reflects the values the Ibarra Robles family has worked so hard to achieve that gained prestige and credibility of their products. “We aim to work with superior quality and hygiene, surpassing the expectations of children and adults, and achieving permanent client satisfaction,” said Rodríguez.

The company’s seven manufacturing plants elaborate all sorts of solid candy, soft candy or toffees, lollipops, marshmallows, peanuts, chewable candy, chocolate candy, and snacks. The product lines comprise over 260 products with an annual production of four million boxes containing an average between 7 and 14 kilograms of product. Ten percent of this production is sold abroad.

A Mexican expression, “more Mexican than tequila,” might apply to some of Dulces Vero’s products. The company manufactures a hot spicy line such as lollipops and gummies covered in powder. “Children love it and they get used to spicy food from an early age,” said Rodriguez.

In addition, Dulces Vero offers products with tamarind, peanut, and chocolate flavors. Japanese peanuts are a tradition for the Mexican audience. These peanuts are covered with a crunchy flour mix and flavored with sweet or spicy natural and artificial ingredients.

In addition to different flavors, lollipops and candies carry attractive shapes and colorful motives such as “manita de la suerte” or lucky hand and “elotes” or corn on the cob. Chocolate products are also filled with strawberry, mango, banana flavored candy. This ample variety of products requires advanced technology that includes sophisticated equipment especially adapted to produce concepts, shapes and textures that are unique to Dulces Vero products.

“These products are very popular among children, especially to stuff ‘piñatas’ at parties, special occasions, ceremonies, Mexican feasts, and Christian celebrations,” said Rodríguez. Eighty five to 90 percent of the production belongs to the lollipop lines with an estimated market participation of 21 percent in this type of product.

Dulces Vero targets all segments of the population, including low-income audiences although Vero’s prices are not the lowest on the market, according to Rodríguez. Main marketing strategies are through events at candy stores, schools, and massive advertising in radio, television and printed media.

QUALITY THAT PAYS OFF

Since inception, the company was committed to achieving the best quality in processes and product through day-to-day work with suppliers and internal consumers, in order to please customers of all ages. The company implemented best practices in manufacturing and continuous improvement in all processes that allow fast identification and prevention at the production lines’ critical points. Its quality department requires that all suppliers are certified for innocuousness and hygiene of their raw materials that include sugar, glucose, citric acid, colors and flavors. The company works with local and international suppliers.

According to Rodríguez, Dulces Vero has set higher goals in the exports area for this year, increasing international sales by 15 to 20 percent. The strategy includes aggressive marketing and the “nostalgia” ingredient, which works for Mexican immigrants living abroad. Currently, Dulces Vero exports to over 20 countries including the United States, Canada, Colombia, Chile, England, Spain, New Zealand, Korea, India, Japan and the Arab Emirates, among others. Its annual participation at international fairs has been instrumental in the exports process, and by increasing overseas sales, the company contributes to Mexico’s industry development as well, said Rodríguez.

“Presently, we have two main jobs at hand. The first one is to finish the institutional fusion of the companies that comprise the group. The second task is to increase national and international sales. We believe in our industry and in our products, and we will set innovative strategies to penetrate the American market, not only targeting Mexican immigrants but also the American public who has shown great interest in our unique products,” he concluded.