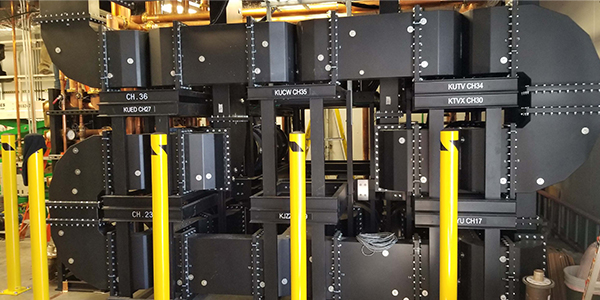 Dielectric Communications was on the cusp of new broadcast technology at its founding nearly 60 years ago – and it remains on that same cutting edge today. This company, which began its success story by supplying transmission equipment to the early television stations after World War II, is now poised for TV’s digital revolution. As Sally Rich, Dielectric’s marketing manager, explains, a Federal Communications Commission regulation mandates that all U.S. TV signals must be in digital format by 2003. “This will mean a huge influx of business,” Rich predicts.

Based in Raymond, Maine, Dielectric produces antennas, multichannel combiner systems, switches, directional couplers, patch panels, transmission lines and filter systems for both radio and television broadcasting. It emphasizes that it is “the only company who designs and manufactures the full broadcast system from the transmitter output to and including the tower top antenna.” Dielectric also considers itself a solutions supplier, “jointly tasking with client engineering staff to design the most technologically advanced systems in the world.” Just how ready is this manufacturer for digital TV? Of the original 35 digital TV stations that were on the air as of Nov. 1, 1998, Dielectric had supplied the systems for 28 of them.

A History on the Air

Dielectric was founded in 1942 by Dr. Charles “Doc” Brown, who was researching materials to be used in radar transmission, which ultimately grew into the radar technology used by the armed forces during World War II. After the war, the company used that same technology to invent and supply equipment for the first television stations; Dielectric was a vendor to CBS, NBC and the DuMont network, which eventually became ABC.

The company moved to its current facility in 1959. Brown eventually sold Dielectric to Sola Basic Industries, which in turn was acquired by General Signal Corporation in 1977. In 1985, the company expanded its combined manufacturing and office space to 100,000 square feet. The following year, it purchased RCA Corporation’s TV antenna operation in Gibbsboro, N.J., which was closed and moved to Raymond in 1994. In 1998, Dielectric became a division of SPX Corporation. Earlier this year, it acquired the antenna products division of Harris Corporation in Palmyra, Mo. This last move boosted Dielectric’s production space to 175,000 square feet – and is also viewed as critical to the company’s preparation for the digital market.

“The purchase of Harris’ Palmyra operation enhanced our product line and increased our capacity,” says Jay Martin, Dielectric’s director of marketing. “We’re able to build up to 100 systems a year in that facility, in addition to the 250 systems a year we build in Raymond. Palmyra also has a far-field test range which you can essentially confirm the performance of the antenna in the real world.”

That testing capacity underscores Dielectric’s commitment to quality, which is also apparent in its ISO 9001 certification. “Add the well-documented Maine work ethic, and our customers know their communications system will perform consistently and virtually trouble-free well into the next millennium,” the company states in its product literature.

Ready for the Revolution

Digital TV also plays into the company’s most recent product introduction, the Z Star Combiner. This system allows a number of different antenna signals to be combined and broadcast from one antenna – a vital selling point because every television station now has to have a new type of signal with the advent of digital TV. Martin describes the Z Star Combiner as “a manifold-type combiner that allows the combination of four stations in one system. It also provides a mask filter for transmitter.”

Digital is one front for Dielectric’s future growth. Another is the international market. According to Martin, the company is now present in 59 countries, but there’s room for even more growth on the global front. “We’re ready for digital TV, so we’re now looking beyond digital TV,” he says. “We have to be entrenched in the international marketplace because the rest of the world has to catch up to us in digital. By 2006, analog will be out in the U.S. but there’s still analog business internationally. Initially the business will be the Americas, Africa, the Middle East and China. We’re not attempting Europe yet because they have a lot of entrenched manufacturers there through the single market.”

The international market will also provide an opportunity for Dielectric in one of its other product lines. The company manufactures dehydrating equipment for telephone lines, including dry-air pressurization equipment and accessories. This is used in telephone cables to diffuse moisture, and to offset the hydrostatic pressure that collects on top of buried and underground cables. Martin points out, “Fiber-optic cables are somewhat reducing the need for this dehydration equipment domestically, but we think it will be needed internationally.”

Dielectric also offers a complete line of radio broadcast equipment that includes coaxial cables, switches, filters, combiners and antennas. It presents itself as a one-stop radio-frequency (RF) shop, with the resources available to keep stations on the air even in emergency situations. The company carries a five-year warranty on complete Dielectric-built RF systems, which covers everything from the transmitter output through the transmission line, switches, filters, combiners and antenna.

Radio broadcasting, too, is transitioning to digital technology, although not as rapidly as TV. But – with its capacity for digital-products manufacturing and its creative approach to design, engineering and development – Dielectric will be ready for the day when radio goes all digital as well.