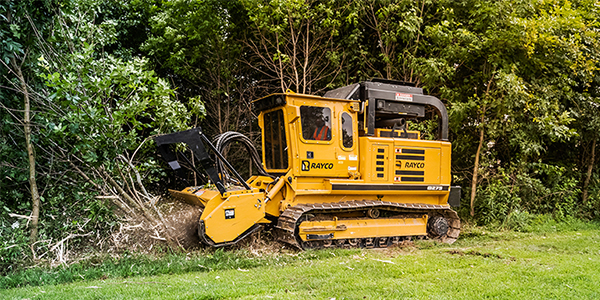 They say that as large as a tree is above the Earth, its root structure is of equal size below the ground. The same could easily be said for Rayco Manufacturing, the undisputed industry leader in tree stump cutting and site preparation equipment. The immense accomplishments of this “can do” company is rivaled only in size by the innovation and creative design that produced them. Rayco founder and owner, John Bowling, attributes this success to family ties and a strong Midwestern work ethic.

“Rayco began as, and still remains, a family owned business,” he explains. “The definition of family here extends to all the employees. We believe that the support and compassion that we provide here, along with an honest work ethic, has helped our employees to work harder and smarter.”

Indeed, the company has worked harder and definitely smarter. The roots of family ties, as John Bowling defines them, have propelled this seemingly small company in Wooster, Ohio, to be the leading producer of the world’s most complete line of high performance stump cutters and site preparation equipment.

A Seedling Grows
Just as a tiny seed grows into a huge tree, so it was with Rayco Manufacturing. It began as a small company in 1978 in rural Ohio. Today, the company operates out of a 110,000-square-foot manufacturing plant in Wooster, Ohio, employs more than 100 people and just opened a paint facility in Massillon, Ohio, in January 2002. Its products are distributed all over the world. The fertilizer that sparked the growth for Rayco, however, came in 1986 in a product called the RG1620 Junior.

“Up until that time,” Bowling explains, “stump cutters were large, bulky pieces of equipment that intruded upon homeowners’ yards causing some damage to lawns and surrounding areas. More importantly, any fencing surrounding a yard as well as any neighboring fencing near the stump area had to be torn down so the equipment could approach the work site.”

“Rayco was the first company to design a streamlined stump cutter that that was capable of going through a standard 36-inch yard gate,” he explains. “This reduced any damage to the customer’s yard, prevented the tear down of any fencing and greatly reduced the cost and hassle of stump removal.”

The fact that the RG1620 was self-propelled and hydraulic only made it more revolutionary. While the RG1620 changed the face of the industry, the imitators weren’t far behind. That was fine with Rayco, because the company already was headlong into its next innovation.

In 1990, Rayco released the first-ever hydrostatic drive machines. This was the first time hydrostatic technology had been applied to stump cutters. With this technology, the machines required less maintenance, offered more safety features and could clear away tree debris at twice the previous speed. Once again, the competition was catching its breath and trying to catch up.

The C85D is actually a compact bulldozer. The amazing fact about this product is that it weighs only 8,200 pounds, a fraction of its full grown traditional cousin, yet it can bear the same workload.

“We’re so proud of the C85D,” says Bowling, “because it can move into an area and do heavy jobs in compact spaces. In addition to its pushing capacity, it also has cutting and grating capabilities.”

Getting to the job is even made easier because the mini crawler can be transported on most trailers behind a 3/4-ton pickup. A cab forward design and joystick controls give the C85D’s operator unparalleled visibility and control, completed with an 83hp diesel engine.

Also rolling off the assembly line recently was the C85L, a compact track loader. It is the only skid steer size machine available with steel tracks on the market right now. Most skid steer machines use rubber tracks than can be cut easily on construction sites. Rayco’s model with steel tracks provides the durability to get the job done.

Rounding out the new trio is the C85FM, a high-concept, forestry-mowing machine. Designed with a compact structure, the C85FM is capable of higher than normal production levels in densely wooded areas. This product is so new the first model was sold less than six months ago.

“Also on the drawing board, is the future launch of the RG85 4×4,” says Bowling. “It’s a 4×4 stump cutter that provides even more traction, stability and strength. Prior to this product, we had only produced two-wheel drive models.”

Future Growth
Rayco’s tree has grown so much over the years it has become a veritable beanstalk of fairy tale proportions. And the company intends for it to grow even more.

“We’re extremely excited about the new Mini Crawler line,” he says. “We plan to make large inroads into the skid steer market with the C85L. Our hopes are also high for the C85D. There is simply no dozer in the market like ours and it will definitely reach its niche as will the C85FM.”

This newly designed line of Mini Crawlers is Rayco’s attempt to expand into other markets, particularly construction. The company already produces the Haulmaster line of buggies used to transport concrete at construction sites. The Mini Crawler Series is just one example of Rayco’s innovation within associated industries.

If you think about how a tiny seed grows into a strong, towering tree, you can see how a small company has conquered a world market. With the right fertilizer mix of innovation, ethics and employees, successful growth is not only inevitable, but, at Rayco, unstoppable.