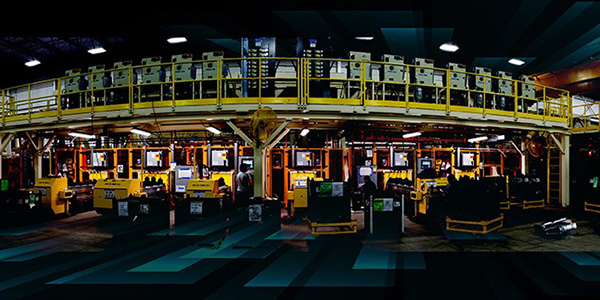 The Paslin Company of Warren, Mich., isn’t in the business of building motor vehicles, but you wouldn’t know that from talking to David Pasque, vice president of operations. What the company does, Pasque says, is produce the tools that enable the Big Three and the foreign transplants to build quality vehicles. Paslin has engineered, manufactured and installed systems from small, stand-alone lean manufacturing automated welding cells to entire body shop systems, including conveyors, material pull and bar coding.

“We are a full-service process, design-and-build organization of manufacturing, assembly and automation systems,” Pasque says of the firm that now employs more than 700 workers.

All in the Family
The company was founded in 1937 by Pasque’s great grandfather, Daniel Pasque, and grandfather, Daniel C. Pasque. Today, four generations later, it’s still a privately held family business. David’s father, Daniel A. Pasque, serves as president and chief executive officer. His uncle, Chuck Pasque, serves as chairman/treasurer; and brother Daniel J. Pasque is vice president/secretary. Twelve family members in all work in the business, which had a nine-figure revenue in 1999. “It has been a pretty steady growth pattern during the last three to five years,” Pasque says.

The company has seven manufacturing plants totaling more than 700,000 square feet. Six plants are in Warren and one is in nearby Roseville. The company maintains an international presence through its worldwide sales and financial offices, and involvement in international projects. The company built four low-volume body shops in Venezuela. Paslin’s subsidiary, Paslin de Mexico S. de R.L. de C.V., was formed last year to handle business in that part of the world, Pasque says. This unit has been involved with building body shops in Mexico for a major customer. The first body shop is installed and running, and the second is ahead of schedule and due to begin production in the fall.

Paslin has a lot of experience in simultaneous engineering projects including full-capability studies, kirksite dies to production process intent, designing and building of prototype welding racks simulating system automation, detail and assembly checking fixtures, and CMM inspection programming. For example, Pasque says, the company was the prime contractor for all manufacturing and inspection processes for a front-suspension cross member. The contract mandated running 300 cross members from the die and assembly equipment at 1.67 Ppk in cycle time before shipment of the system to the user. The design-for-manufacturing and -assembly studies resulted in product changes to several parts to facilitate the manufacturing and to reduce the weight of the cross member.

Paslin has also been awarded simultaneous engineering projects from single-component subassemblies, such as body side apertures, to the entire body in white development. Project times range from 30 weeks prior to pilot build, to launch of production and support, Pasque says.

Besides design and engineering, the company provides technical assistance on site. Over the years, the company has participated on many cost-reduction teams, process and productivity improvement teams and product development teams. It has expertise in 24-volt device net, control net, robot programming and PLC programming. Also, the company’s reliability, maintainability and through-put planning continues throughout the progress of a project and keeps teams focused on optimizing cycle time, ergonomics studies, part flow and process balancing.

Program Professionals
The company has dedicated approximately 40 to 50 technicians for supervising installation and providing start-up assistance. “Our expertise in robot programming, tooling, electrical, PLC programming, project installation management and coordination with outside suppliers, complements the training programs for operation and maintenance of company-built systems, “Pasque says. “Depending on a project’s size, the company can support between four and six major installations and eight and 10 minor ones where some technical assistance and training is required.”

Besides building facilities for other car manufacturers, the company has also been busy constructing plants for its own expansion. In late 1997, the company built a new 130,000-square-foot facility for manufacturing and for its in-house process, design and computer simulation division, which involves 250 design engineers, designers and processing professionals. Paslin has also established a controls engineering division that employs 25 controls design professionals.

The focus of each division, Pasque says, “is to achieve complete integration of computer-aided design technology, which in turn will improve the quality of our design-and-build services, while reducing the time and cost required to deliver our products to market.” The Web-based innovation of online project reviews increases communication and includes virtual tours of the tools as they are being designed. Relational databases were developed to control product changes as they relate to welding schedules and containerization; these enable queries of product assembly and sub-assembly trees.

The expansion move, Pasque says, has worked out well to coordinate the total big picture of project management and integration of its internal quality system. In addition, it puts the company in total control of its dedication to quality system management – which, Pasque says, “is understood, implemented and maintained at all levels of the organization.” The system has been developed to comply with QS 9000 TE to ensure that all products meet or exceed the agreed specifications. Pasque says, “The company’s objective is to reduce non-conformances and waste, with an increase in reliability and maintainability which in turn will lower the life-cycle cost of our products.” Paslin is certified and registered as a QS 9000 TE Supplement and ISO 9001 manufacturer.

The Future: Stay Ahead
As with other manufacturers, Paslin’s future rests with automation, process innovation and delivering products on tighter schedules. “The company just received a large project for a New Jersey plant,” notes Pasque. “They gave us 10 weeks to design and build it. Around-the-clock design-and-build work schedules and flawless coordination were required, which is something that a family-operated business can implement quickly and effectively. Our board members have Sunday dinner together. Our internal communication is inherent to being a family in business.”

For its part, Paslin has implemented state-of-the-art technology to keep setting the pace. For design, the company’s engineers use software packages such as AutoCAD 3D Mechanical Desktop, Unigraphics and CATIA for modeling and designing. In conjunction, they also use a variety of simulation software such as ROBCAD and DENEB. The weld locations and the welding guns are simulated first and tooling is designed around it. “This avoids the weld gun-to-unit crashes that used to be so common in manual design.” Paslin’s custom-built neutral environment platform (NEP) allows communication between all types of CAD systems and text-based information. AUTOMOD II is used for plant-level simulation with regard to part deliveries, through put, MTTF MTTR, simulating normal and catastrophic downtimes. Ergonomics software assures ease of use and proper techniques for lowering on-the-job strains, sprains and injury.

The company also has an FTP server connected to the Internet via a T1 line for faster transfers of data. Individual accounts can be set up on the server, depending on the volume of data. The company is also an Automotive Network Exchange (ANX) partner, which allows for fast and secure transfer between automotive trading partners.