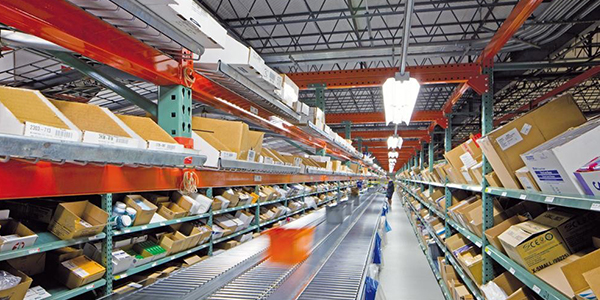 From the very beginning of the e-commerce economy, the crucial issue facing every dot.com merchandiser has been order fulfillment. It was all well and good to offer products on the Internet, complete with razzle-dazzle displays and animation. But once the customer clicked on the Order icon, could the dot.com get that order delivered, on time and in the quality and quantity the customer expected? This may seem an obvious question, but many a Web site has vaporized over its failure to fulfill an order — especially after the last two holiday shopping seasons.

Interlake Material Handling, Inc., of Naperville, Ill., has emerged as the order-fulfillment solution to traditional brick-and-mortar retailers and e-tailers. The company has, in fact, positioned itself as the one source for storage, conveyance, sortation, controls and automation systems. Its products are integral components in the distribution centers of some of the nation’s largest retailers — and have given many of those retailers the leg up in beginning their e-commerce functions.

A major advantage for Interlake is its critical mass, says Michael O’Reilly, vice president of sales and marketing. The company has five manufacturing facilities — in Pontiac, Ill., Lodi, Calif., Sumter, S.C., Shepherdsville, Ky., and Matamoros, Mexico (its newest, opened in June). “We’re close to our customers no matter where in the U.S. they are,” O’Reilly says. “The bar has been raised in this industry to where the gaps between the competition in product mix, quality and price are shrinking. So our proximity to our customers and our willingness to understand their needs gives us strong advantages.”

Conveying Synergies
In August, Interlake’s already strong market position got a further boost when its parent, U.K.-based GKN, merged its Support Services unit (which includes Interlake) with Sydney-based Brambles Industries Ltd. (now renamed The Brambles Group). “This benefits us in terms of the synergies we expect to have with Brambles, in particular with its document-management area,” O’Reilly says. “It also allows us more growth opportunities from being part of a global support services organization. The merger will challenge us to increase our services offering either through synergies with our new sister companies or implementing the best practices from a sister company.”

Interlake has yet another advantage behind its market presence: experience. The company has been one of U.S. industry’s key suppliers of storage rack and conveyor products for more than 90 years, and its products and systems are used in all industries. Its annual sales are estimated at $280 million; Brambles, by the way, accounts for about $2 billion in worldwide annual sales.

The company sells its products and systems through several channels: direct, distributors, retail, Latin America and automation services. Its sales organization is divided to specifically target these channels. The distributors, who are resellers, are located throughout the United States and Canada.

Interlake established its retail group because of the specific needs of retailers in both storage and merchandising. The group’s dedicated sales, customer-service and engineering-support personnel provide retailers with solutions for any particular merchandising need, especially for displays in the store. The existence of this specialized group has proven a boon for Interlake in meeting its retailer-customers’ needs. “We do work on many facets of the retailers’ distribution centers,” O’Reilly says. “Many of these retailers began migrating to e-commerce after the holiday season in 1999, and we experienced tremendous activity in supporting those moves. Other big retailers are starting their e-commerce areas now.”

The Best Defense
In positioning itself as the one-stop supplier for storage systems, Interlake has adopted a customer-focused approach to its product line. “We built our business predominantly on providing customized, engineered solutions for our customers,” O’Reilly says. The company also provides standard products, however, and has proven to be quick on its feet in terms of product innovations.

At this year’s PROMAT materials-handling trade show, Interlake unveiled The Defender, a new frame especially designed to resist and reduce forklift damage. The Defender’s design moves the front column back 9 inches from the aisle, thus lessening the amount of contact from the forklift. In addition, The Defender’s front column is made of tubular steel with a 3/16-inch thick wall — much thicker than ordinary racks, and more resistant to abuse.

The problem of forklift damage has led Interlake to offer a unique service to its customers. “Our people will survey a customer’s facility and present an offer that would allow Interlake personnel to come in and fix the racks,” O’Reilly explains. “In doing the repairs, we use genuine Interlake parts, and we rewarranty the rack after the job is done. It’s a more cost-effective alternative for the customer than fixing the rack itself.”

Taking the Express
Two years ago, Interlake provided strong evidence of its ability to be creative in customer service as well, when it launched Interlake Express. This program allows selected rack products to be shipped to customers in 48 hours or less, and provides ordering capabilities through e-mail or through the Interlake Express Information Desk. More than 40 of the company’s most commonly ordered roll-formed selective rack products and accessories are available through Interlake Express, at competitive pricing.

“We’ll be challenged to provide new and different services down the road,” O’Reilly says. “Our systems integrator model calls for us to add more services. We’ll also launch new customer-care programs with the goal of retaining customers for life. We need to extend our value beyond the old hit-and-run approach, which involved moving from one customer to the next. Our focus now is to come back to existing customers with new services and value, and to do this on an ongoing basis.”

The Matamoros facility promises more growth opportunities for Interlake from two directions. First, it extends the company’s reach to customers in the southwestern United States. Second, it provides a vehicle for growth on the international stage, giving the company an entrée into new markets in Central America and South America.

“Interlake is in the leadership position in the storage-rack side, but we’re not as well known for conveyance and sortation products,” says O’Reilly. “So our goal is to promote this side of our business to a greater extent. But we have our unique position in the market, and our customers tells us that we stand out in product, quality, service and price. We’ll take these distinctions forward to meet every opportunity that comes our way.”