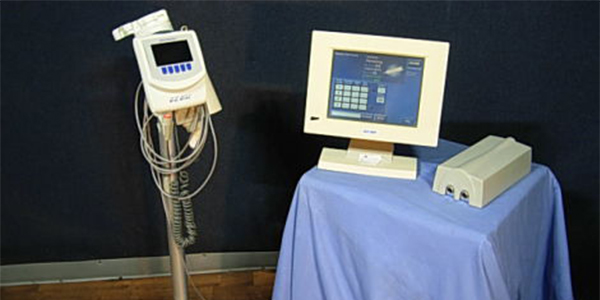 In April 1962, E-Z-EM, Inc., of Westbury, N.Y., made the first sale of its single-use barium sulfate contrast administration kit. In the four decades that have passed since then, the company has expanded on its pioneering foundation. E-Z-EM is today the world’s largest manufacturer of contrast agents for gastrointestinal (GI) radiology, with sales of more than $100 million annually and with the same relentless drive to invent what got the company started in the first place.

E-Z-EM now comprises two business segments: Imaging Products – including Enteric Products, Inc., a subsidiary developing and manufacturing in vitro diagnostic test for the ulcer- and cancer-causing bacterium Helicobacter pylori – and Angio- Dynamics, Inc., a subsidiary focused on the interventional radiology market. The company also has become an international concern, with offices or plants in Canada, Puerto Rico, Belgium, the United Kingdom, the Netherlands and Japan. Obviously, E-Z-EM is many miles ahead of where its founders began 40 years ago.

E-Z-EM’s President and Chief Executive Officer Anthony A. Lombardo, had this to say about the company’s four-decade journey to the top of its field: “In our very competitive, dynamic marketplace, E-Z-EM has prospered as a result of good ideas, hard work and a loyal, dedicated team of employees, customers and shareholders. More specifically, I would have to say that one of the main reasons we’ve thrived, and the reason we stand apart from our competitors, is the very close relationship we have with the end-users of our products, not to mention the excellent relationships we have with academic centers worldwide. In fact, we’ve built a brand name based on working closely with important clinical sites the world over. From a simple idea the founders of the company had four decades ago to prevent cross-patient contamination being reported in the radiology literature of the day E-Z-EM certainly has come a long way. What E-Z-EM has accomplished in its first 40 years is remarkable.”

Looking Inside
E-Z-EM’s original contrast media product line is now under the auspices of the Imaging Products Division. Along with its line of products for GI imaging, the division also markets biopsy needles, procedure trays, mammography accessories, and a line of products for CT scanning, including the newly developed procedure of virtual colonoscopy. The company also contract manufactures pharmaceuticals, cosmetics, and neutralizing agents for chemical and biological warfare agents, at its Montreal, Quebec, facility.

Enteric Products and AngioDynamics are wholly owned subsidiaries of E-Z-EM. Enteric Products is focused on diseases and disorders of the GI tract, with its test kits for Helicobacter pylori, the bacterium that has proven to be the major cause of peptic ulcers and gastric cancer. AngioDynamics designs and manufactures a wide range of products, including angiographic, vascular access, thrombolytic, angioplasty and stents, as well as abdominal infection drainage products. AngioDynamics’ focus is on diagnostic and therapeutic products for interventional radiology and other areas of minimally invasive surgery. \

The advantages offered by these types of procedures are that they have reduced risk and trauma, are less complex, have fewer and less serious complications, can frequently be performed in a disease’s early stages and often result in less costly and more definitive therapies than do traditional surgical procedures. “The great thing about our products is that they allow the treatment of peripheral vascular disease without having to opt for major surgery,” says Lombardo. “Instead of major surgery, physicians use a balloon catheter to open up a clogged pathway and then deploy a stent to keep the pathway open. The balloon catheters and stents complement each other. And the cost to the healthcare system is greatly reduced compared to an open surgery procedure.”

In a recent interview with Imaging Technology News, Lombardo cited AngioDynamics as “the fastest-growing segment of the company.” The subsidiary’s business is growing at an annual rate of 30 percent, according to Lombardo. Its products “are productivity tools that interventional radiologists use on a daily basis, and are used under image-guided assistance.”

The New Story
Also in that interview, Lombardo told Imaging Technology News that the company’s structure (which was redesigned over the past two years) was part and parcel of the “non-barium-based thinking” that E-Z-EM believes will drive its business in the future. “Virtual colonoscopy and some of the other new areas are really not dependent on barium for their survival, nor are our GI prep products,” he said. “There are other products in the gastrointestinal plan that we’ll be bringing in that are not contrast-related but are device-related. What we must do is learn from our past successes in the marketplace and leverage these successes to build a new story. For example, in the CT suite we are leveraging the brand recognition of our contrast agents to build a base for our CT injectors and our new virtual colonoscopy products.”

E-Z-EM continues to introduce new products and concepts that have contributed many chapters to that “new story” that Lombardo spoke about. “Over the last couple of years E-Z-EM has been focused on developing new technologies,” notes Lombardo. “As such we’ve recently released a new “tool kit” in the virtual colonoscopy arena that includes the NutraPrep(tm) meal system, Tagitol(tm) tagging agent, PROTOCO2L(tm) colon insufflator, and a software product called InnerviewGI(tm).

PROTOCO2L(tm), another new product, is a colon insufflation system consisting of an automated insufflation device and disposable administration sets. It uses carbon dioxide to distend the colon for accurate imaging diagnosis and improved patient comfort during the virtual colonoscopy CT scan; CO2, when used in place of room air, can reduce the patient’s pain and discomfort from traditional procedures.

NutraPrep(tm) is considered to be the next generation of bowel preparation products. “One of the most important parts of the tool kit would have to be NutraPrep(tm),” states Lombardo. “We’ve developed this product as a prepping system for patients going in for colon screening. This low residue meal system offers the same results as a traditional clear liquid diet but without the uncomfortable side effects associated with a liquid diet. The meal system isn’t the violent cathartic that characterizes a liquid diet. Moreover, patients actually get the opportunity to eat solids with NutraPrep(tm). With this meal system we want to make the prepping process as pleasant and patient-friendly as possible. Increased compliance with a friendlier prep can result in better studies and more patients being screened who would normally avoid the procedure.”

E-Z-EM also is branching out into other interesting product areas. E-Z-EM is a contract manufacturer, as well, and in the past the company has manufactured products for other firms in the skin care and antibiotics fields. Recently, E-Z-EM entered into a joint venture with a Canadian company to manufacture RSDL (Reactive Skin Decontamination Lotion), meant to counter the effects of a chemical and biological weapons attack on military troops. E-Z-EM will be undertaking all the manufacturing, processing and packaging of the product. “With this product, we’ve leveraged our manufacturing capacity to branch out into products used to combat a chemical weapons attack,” notes Lombardo. “This type of lotion is already being used by some NATO countries. In the United States, we’re awaiting product approval from the relevant authorities. Once it’s approved, we feel the lotion will definitely be in the running to become the standard lotion used by the U.S. military to counter these sorts of attacks.”

E-Z-EM’s commitment to better health goes beyond products. This spring, the company joined a new global campaign for the prevention of digestive cancers, the International Digestive Cancer Alliance. As a member, E-Z-EM provides funds for the campaign to increase awareness of this form of cancer, which accounts for the highest number of cancers each year throughout the world; it is expected to account for 3 million cases and 2.2 million deaths this year. A good portion of E-Z-EM’s work on behalf of this group will be to heighten the need for early screenings and prevention.

Commenting on E-Z-EM’s role, Lombardo said, “The alliance will seek to raise public awareness, to help organize national screening programs and to remove barriers to widespread screening, including inadequate resources. Our products are already being used around the globe to help prevent this deadly disease. We are very proud to be part of this truly global effort to eradicate colorectal cancer.”