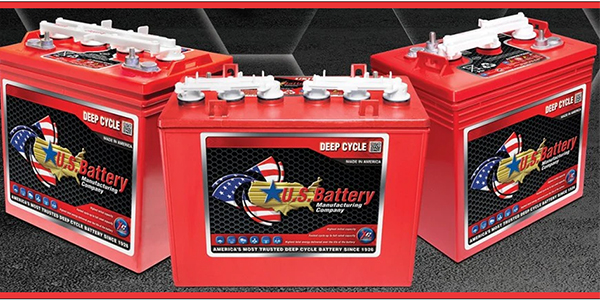 If you are a golfer, then you look forward to those long, sun-filled days of summer, when there’s plenty of daylight to get in 18 holes. Officials at a company called U.S. Battery Manufacturing like those days, too, since the California-based company is one of the leading suppliers of the batteries that power electric golf cars.But now, officials at U.S. Battery – with roots that go all the way back to 1926 – have a new reason to enjoy cloud-free days, because the industry leader in manufacturing deep-cycle batteries is increasingly winning business in new major market segments such as industrial lift and power floor cleaning equipment. Another interesting, and growing market is the storage of energy from photo-voltaic solar panels.

“Solar panels are wonderful generators of electricity, but you need a battery with enough capacity to store these large amounts of energy,” explained Donald E. Wallace, the executive vice president of sales and marketing for U.S. Battery Manufacturing. “You need to have a battery with a large reserve capacity, because the battery has to be able to deliver that energy over long periods of time.”

That’s why U.S. Battery sells a considerable number of its batteries in international markets such as inland Australia, where there is a limited inland electric grid, or in many other countries such as the Dominican Republic, where unpredictable power supplies are often only online three to five hours a day.

Major niche player
“The rest of the time they’ve got to be able to draw energy from their backup power systems,” Wallace said. And U.S. Battery has done well by serving this market, one of several specialty markets that have allowed it to become a major niche player in an era of large battery conglomerates.

U.S. Battery has a long and rich history. The firm started in 1926 in the San Diego area, but modern growth took place with the involvement of current owner, president and CEO John E. Anderson, a longtime executive who started out with the Nickel Silver Battery Company. He eventually wound up with a company called Battery Plates, which took over U.S. Battery and retained the name. Anderson became sole owner in 1993.

Today, the company is headquartered and has a plant in Corona, Calif., outside of Los Angeles. It also operates two manufacturing facilities in Georgia: in Augusta and nearby Evans. U.S. Battery gained the Evans plant in the 1993 transaction and expanded into the Augusta facility in 1999, when the company agreed to lease a 125,000-square-foot manufacturing facility that formerly housed a hydraulic equipment manufacturer.

The two plants in Georgia both manufacture golf cart batteries but also started production on a line of batteries for use in industrial equipment such as scissor lifts and sweeper machines. Traditionally, those machines had been powered by propane, but operators have been finding electric power more efficient.

The common thread to the different battery lines that U.S. Battery makes is that they focus primarily on deep-cycle batteries. These types of power supplies differ from an automobile battery, which needs to hold a large amount of energy and release it over a short period of time. Deep-cycle batteries store energy over a longer period of time, in order to provide continuous power over extended periods of time.

“A deep cycle battery is specifically engineered for equipment such as golf car and related applications. A fully charged set of deep-cycle batteries can provide hours of operation and can generally be re-charged in an eight-12 hour period of time,” Wallace explained. “A car battery charges when the engine starts and activates the car’s charging system. It takes approximately 20 minutes of driving time to replace the energy used in one engine start. Running a standard automotive battery completely dead, due to it’s construction characteristics, could have used up to 25 percent of your battery’s life total life, while our deep cycle versions will last hundreds to thousands of cycles depending on the depth of discharge, simply put, it’s what they’re designed for.”

Tiger Woods phenomenon
The golf car market has been especially good to U.S. Battery, as business rose steadily in that market segment both in the 1990s and into the early part of this decade. “I think it’s the Tiger Woods phenomenon,” said Anderson, referring to the sport’s superstar. “He’s brought a lot of people to golf.”

Because the golf car industry is still considered something of a niche market, U.S. Battery has not had to face competition from some of the larger players in the battery industry. “Most of these bigger companies will outsource to companies like U.S. Battery, so we’ve been able to fill it for many years.”

Golf cars aren’t the only area of recreation in which U.S. Battery has been able to capitalize on a trend of rising growth. Another important segment is the marine industry, which includes both recreational boating and fleet fishing boats.

Wallace said deep cycle batteries for commercial fishing boats that depend upon reliable power supplies for extended periods of time, have also held as a steady niche market for the company. “Only U.S. Battery and one or two other companies continue to make these specialized types, so it has been and continues to be a very good niche market for us.”
Company officials say that U.S. Battery is also making an aggressive move into the area of solar energy. So far, the main push has been into overseas markets because domestically, it’s difficult to develop a system that’s more cost efficient than drawing power from the traditional electric grid.

However, developing or isolated nations around the world without reliable power grids are looking for energy to power their increasing technology demands. As the global cost of oil rises and demand for fossil fuels becomes tighter, solar energy systems may become increasingly cost efficient.

Of course, global commodity markets can cut both ways. The main ingredient in a battery is lead – more than half of a standard 63-pound battery – and lead prices have roughly doubled in the last year. U.S. Battery has been forced to pass some of those costs along to its customers.

The company hopes to respond by expanding its product base. “We are shifting our focus to other major markets that we haven’t historically been in, that’s the way we’re going to position ourselves,” Wallace said, adding there will be several major new product launches over the next year or so.

In the meantime, the focus has remained on quality. The company’s warranty rate is a stellar one-quarter of 1 percent, far exceeding any industry standard. Wallace said that’s because U.S. Battery makes quality on the production line a major focus.

“We still make our complete battery line in the United States,” except for some hard rubber component parts that are made in Mexico, which represents less than 1 percent of the raw materials used in production, Wallace said. “We haven’t outsourced anything to China, Mexico or other emerging countries. We’re very proud of that fact.”

But then, you wouldn’t expect anything less from a company named U.S. Battery.