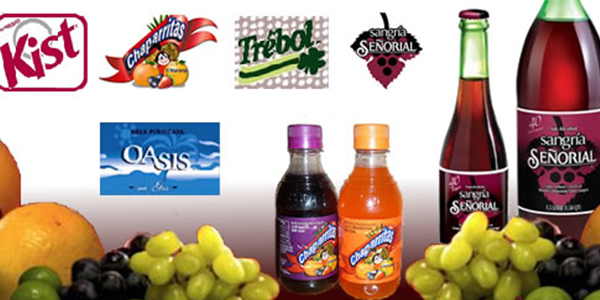 Building a “juicy” business in the second largest carbonated soft-drink market in the world is not easy, and Grupo Mezgo has worked hard to place itself among the top five producers in Mexico. At a rate of 155 liters of soda per capita annually, Mexicans are a coveted market for national and international corporations in the segment. However, trends are changing and natural juice consumption has grown to a $1 billion market per year.

Within this market, companies differentiate their products with special formulations in order to attract the Mexican consumer’s interest. Grupo Mezgo not only produces a nutritional line of fruit drinks that are a favorite of Mexican families but also has created new product categories in this sector.

Founded in 1937 by Don Manuel G¢mez Cos¡o as a small bulk pineapple juice producer, the company expanded into the soft-drink market 10 years later to produce non-carbonated fruit drinks. Although the original name was “El Naranjo,” the products came to be known as “Chaparritas,” – meaning “shortie” – named so because of the short bottle.

The drink became a children’s favorite and mother-approved because of its natural ingredients, essential natural and citric oils. Today, the drink is pasteurized to guarantee an even quality and longer shelf life. Non-pasteurized juices might produce bacterial illnesses that are especially damaging to children, pregnant women or the elderly with weakened immune systems. New high-pressure pasteurization methods increase shelf life and reduce bacteria count without affecting the flavor or nutritional content of the juice. “Chaparritas El Naranjo are premium drinks that stand out from other juices and sodas because of the company’s dedication and careful manufacturing process,” said Massu.

In 2004, we decided to re-launch Chaparritas in Mexico with the traditional glass bottle presentation. This project was developed with the support of our glass supplier, Vitro, Mexican leading glass bottle manufacturer.

In 1964, the vision of business brought yet another great product to the table, Sangr¡a Se¤orial. “This soft-drink does not have any alcohol; we produce it after extracting all alcoholic fermentation from wine we make,” said Jorge Massu, marketing director. Certainly, in 1964, Bodegas Brandenvin was established to produce the base of Sangr¡a Se¤orial, a red grape carbonated drink that sparkled in the Mexican market and launched a new category in the soft-drinks industry.

The concept of sangria is original from Spain, a mixture of sweetened red wine and fruits. Although little is said about the origin of sangria, the meaning, “bleeding,” relates to an essential element for life, blood. Sangria mixes a table red wine with the luscious fruits of summer.

Coming from the custom of sweetening Mediterranean wines during the classical period, the tradition grew strong in Spain and came to Mexico in the colonial times. This tradition in Sangr¡a Se¤orial can be drunk naturally or mixed with different alcoholic beverages. “Se¤orial created a category in itself and has remained “the” sangria in Mexico, and now abroad in the consumers’ preference,” Massu added.

After the success of Sangria Se¤orial, Mezgo continued to create new products to please the Mexican palate and continue its leadership on the market. Tr‚bol was developed to compete in the carbonated soft-drink market, but it was presented in an array of fruity flavors that made it unique. The beverage is made of natural ingredients, essential citric oils and flavor enhancers, and it is offered in tangerine, orange, grapefruit, lime, strawberry, and apple flavors.

Today, the group maintains a conglomerate of bottling companies and production plants, and distributes through three channels: the traditional commercial routes with its own fleet of 300 units, the national chain of self-service stores, and national distributors. It also works through a network of franchises, which utilize Mezgo processes and production, operative and commercial methods related to Mezgo’s proprietary formulations. “Some of these franchises are bottling companies managed by Coca-Cola and Pepsico,” said Massu. “We sell them the concentrate and they bottle and distribute the products.”

During the 1980s, the company decided to export Sangr¡a Se¤orial to the United States. “We export through Novamex, a company that represents a variety of Mexican food and non-alcoholic beverage brands,” said Zendy Garc¡a, exports manager.

In business since 1987, Novamex’s corporate offices are located in El Paso, Texas, with satellite sales offices in major markets throughout the United States In 2004, the company started exporting Chaparritas through Interex, with offices in Dallas, Texas.

“A distribution company that understands Mexican culture and audiences is important to us because we need a partner in touch with the domestic markets as well as someone with a good sales and distribution structure so you can reach all the core markets” said Garc¡a.

Our main focus of international development is to continue the expansion in the United States, and Canada.

“Our strategy not only relies on the immigrants’ `nostalgia’ of the product and how parents want to hand down these good childhood experiences but we feel confident that the quality of our product itself will appeal to other markets and consumers looking for different and original flavors,” said Massu. Last year, negotiations started with the Asian and European markets.

KEEPING UP WITH THE TIMES

The carbonated soft-drink industry is not the only one Mexico leads worldwide. A recent J.P. Morgan report placed Mexico as the second consumer of bottled water, only after Italy in the per capita ratio. After 155 liters of soda and nine liters of juice per year, Mexicans still make room for 134 liters of bottled water per person. With a population close to 100 million inhabitants, the market is enticing.

To meet this growing demand, Grupo Mezgo launched in the mid 1990s its Agua Oasis, a premium bottled purified drinking water balanced in minerals and filtered through sophisticated purification methods including ultraviolet light. “We extract water from our own wells located in the Mexico City area, which is the best region in the country for underground water sources,” said Massu.

Grupo Mezgo has achieved a market participation of 3 percent and exports 25 percent of its production on average. It also markets a regional product, Kist, an apple-flavored carbonated drink that has become very popular among the Jalisco families. “Our soft-drink division permanently researches and develops new flavors to remain updated with the market trends,” said Massu.

According to both Garc¡a and Massu, Grupo Mezgo’s ability to take leadership in a market that is constantly bombarded with new product relies on the company’s management style, which values true teamwork while allowing each individual to grow personally and professionally. Grupo Mezgo has positioned itself with anticipated vision of the market needs, and diligently works towards its objectives. Mezgo’s open and communicative approach with vendors, employees, franchisers and distributors has blossomed in their loyalty to work with the group and its management team. “We work with dedication and we are pleased with the consumers’ lifelong response to our products,” Massu concluded.