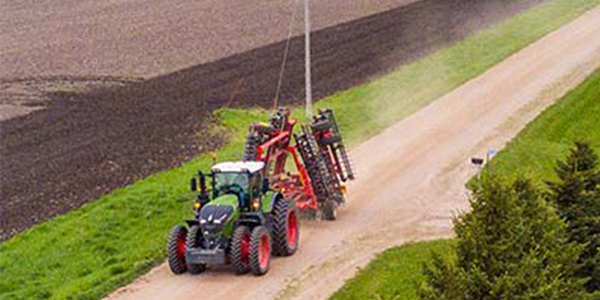 Charles Fleming and Orland Hazen, partners in the small Sunflower Express truck line, branched out in 1945 when they bought the rights to the Diamond Packer, a five-headed farm implement that followed discs and plows to pack the soil and prevent wind and water erosion.

They began production in a small garage in Beloit, Kan., and moved to a larger facility a year later as their product line and business grew. They eventually sold the Diamond Packer patent rights, and the basic genius of that implement has kept it in production by another firm ever since.

Necessity again inspired the partners in 1961, when they invented a revolutionary tillage device and added it to their growing product line. The three-section, flexible-stubble mulch blade plow was Sunflower’s first flexible tillage product and the first flexible plow on the market. Farmers soon found that it would follow the uneven contours of their fields and terraces. In the first year, Sunflower sold only 10 flexible-blade plows; in the second year, it sold 600.

The success of the flexible-blade plow created an increasing demand for other flexible tillage tools. Sunflower introduced a flexible-chisel plow in 1967; it has since evolved into the current Model 2433 three-section unit, which tills deeply and evenly across cutting widths as wide as 41 feet. In 1968, the company added a flexible offset disc to the line — the 1300 series design, which is still popular for its ability to handle both primary and finishing operations. Sunflower manufactures a long line of disc harrows, which now represents the largest segment of its business.

Growth on Top of Growth
The 1970s were an important decade for Sunflower — a time when Sunflower redesigned its entire tillage line and introduced a double offset disc with four sections for superior ground-hugging capability. This exclusive disc featured a patented linkage system that enabled the disc to not only flex from side to side, but from front to rear. Folding outer-wing sections created manageable transport widths, even with cutting widths as great as 45 feet. Sunflower is still the only company to manufacture a four-section disc and continues to market this disc today.

In 1975, the company moved to its present location in a new modern facility in Beloit. Sunflower expanded its territory beyond the Great Plains in those years and moved into the eastern Corn Belt and Canada. The first export activity took place in 1977 with shipments of blade plows and chisels to Australia. For several years during this expansive period, sales and earnings were doubling annually.

Sunflower remained a family-owned enterprise until 1976, when it was sold to SOS Consolidated (later known as CORE Industries Inc.) of Bloomfield Hills, Mich. The union proved fortuitous because, with CORE’s backing, Sunflower was able to maintain its research and development activities during the downturn period of the mid-1980s and to recruit additional dealers in the Corn and Wheat Belts and in Canada. Export sales continued to Australia and new customers were found in South Africa.

Further engineering and technology advances, such as its line of field cultivators and its one-pass land finisher, raised Sunflower to another level in the ‘80s. Creative engineering remains a continuous process today; 70 percent of the firm’s current business involves equipment models that did not exist seven years ago.

The company has also acquired patent rights for many of its innovations. Included are certain applications of ultrahigh molecular-weight polyethylene (UHMW), one of the world’s toughest substances with 10 times the abrasion resistance of carbon steel and an amazing impact strength that makes it a key ingredient in bulletproof vests. Used in high-wear areas on Sunflower farm implements, UHMW eliminates the need for lubrication and dramatically reduces the incidence of parts replacement and downtime.

Seeds for New Business
Sunflower expanded its product line in 1986 with the purchase of the Flex-King Blade Plow line from Flex-King in Quinter, Kan., another proponent of conservation tillage. In the following year, the company purchased the total assets of Richardson Manufacturing Company and its Cawker City, Kan., facility — 17 miles from Beloit and still in use today producing Sunflower finishing attachments and all-purpose grain drills. With both acquisitions, Sunflower now enjoys a 100 percent market share in the blade plow business. Blade plows are complete residue-management tools, possessing the unique ability to leave 95 percent of the crop residue it finds undisturbed.

In 1993, Sunflower purchased the Best Grain Drill line from Best Manufacturing of Jonesboro, Ark. This acquisition brought Sunflower its first “no-till” product. No-till farming is a system in which the soil is not disturbed between harvesting one crop and planting the next. It includes direct seeding into stubble, eco-fallow and pastures, and maintains 100 percent of the residue.

Up until the 1993 grain drill acquisition, Sunflower had been a “full-fledged tillage company,” says Sunflower’s director of marketing, Bruce Cooper. Sunflower was founded on the need for conservation tillage back in the ‘40s when farmers were turning soil over and then watching it blow away. To protect the soil, the residue and moisture has to be maintained. Soil preservation has long been Sunflower’s design parameter and company vision.

Sunflower’s success has always been directly connected to helping the farmers become better stewards of their land.

“Tillage was the important ingredient in the company’s philosophy.” Cooper adds. “That was until someone in the agriculture industry made a prediction in a New York newspaper interview in 1993. They stated that by the year 2000, traditional farming would be a thing of the past. In the future, all a farmer would need is a no-till drill, a sprayer and a combine for the harvest. Responding to that trend, Sunflower bought, redesigned and marketed an all purpose/no-till grain drill. But the no-till concept is now losing adherents in the eastern United States because of prevailing wet weather and low ground temperatures. Tillage appears to be back in vogue in the east and, accordingly, so are our other products. But now no-till is gaining ground in the west. I guess what goes around, comes around.”

The Next Harvest
The Beloit plant was expanded in 1981 and again in 1996, when its area was doubled to about 300,000 square feet. The plant has recently achieved ISO 9001 certification following a comprehensive, third-party assessment by CRS Registrars of Toledo, Ohio. Sunflower employs about 270 at Beloit and Cawker City, combined.

In 1997, CORE was purchased by United Dominion Industries (UDI), a diversified manufacturer based in Charlotte, N.C. UDI has annual sales of $2.4 billion and about 14,000 employees in 20 countries. Under the new parent, Sunflower became the leading member of the Ag Equipment Division, which includes Feterl Manufacturing of Salem, S.D., a producer of augers and truck utility bodies; and Richardton Manufacturing of Richardton, N.D., which makes dump wagons and grain shuttles.

In 1998 Richardton acquired A&L Grain Carts of Claremore, Okla. The new products from this purchase are being marketed by Sunflower, which is also adding Richardton dump wagons and Feterl grain augers to its salable products.

Today, Sunflower products are sold in most of the United States with equipment express-delivered by its truck fleet to more than 750 dealerships. Its now well-established export territory includes Canada, Taiwan, Australia, England and Saudi Arabia. While the company considers the North American farmer its best and most loyal customer, it continues to court offshore business. Efforts in that direction resulted in a 1999 order for 100 rippers to the Romanian government.