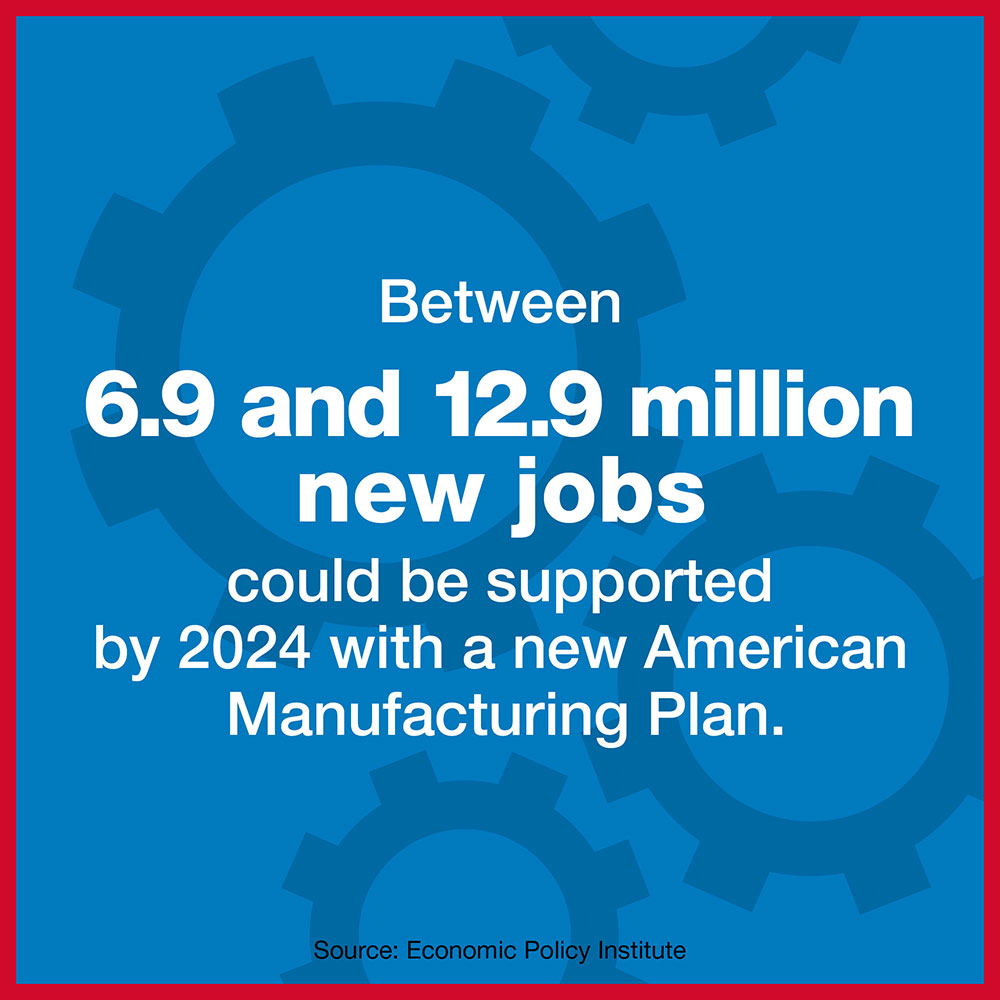 Washington, D.C.—The United States could add between 6.9 and 12.9 million new jobs by investing in infrastructure and clean energy, boosting U.S. exports and eliminating the nation’s trade deficit, according to a new plan released today by the Alliance for American Manufacturing (AAM).

An analysis by the Economic Policy Institute (EPI) found that the plan would add a minimum of 2 million jobs through infrastructure investments, 1.3 million jobs by investing in clean energy and energy efficiency improvements, and 3.5 million jobs from trade and competitiveness policies. At least 2.5 million of the jobs would be in U.S. manufacturing.

The four-year, $2 trillion program outlined by AAM calls for major new investments in infrastructure, rebuilding and modernizing roads, bridges, water systems, schools, ports and broadband. The plan would invest in clean energy, largely in wind and solar, and improved energy efficiency, such as retrofitting buildings. And it takes steps to slash the manufacturing trade deficit through competitiveness measures, including better trade enforcement and trade agreements, as well as a careful shift in the value of the dollar.

EPI’s analysis said the AAM plan would support at least 6.9 million new jobs, which it called a “conservative” estimate. But the spending of these newly employed people could spur enough economic activity to produce an additional 6 million jobs.

“Here’s what we can do about the severe job loss and to rebuild American manufacturing,” said AAM President Scott Paul. “By focusing on infrastructure, clean energy manufacturing leadership and competitiveness, we can create more jobs and a more equitable, sustainable future for our middle class.

“Every four years, politicians flock to industrial battleground states and extol the virtues of factory jobs,” said Paul, one of the nation’s leading experts on trade and manufacturing. “Some economists and idealogues dismiss a manufacturing rebirth as political rhetoric, nostalgic and unrealistic pandering. I will tell you they are wrong. 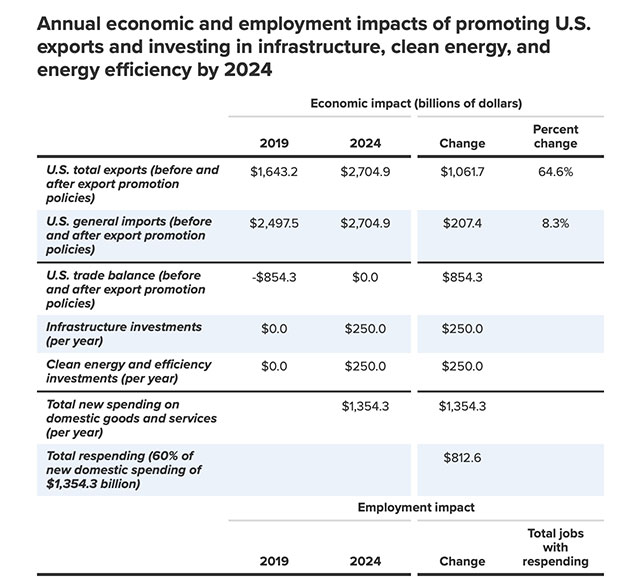 AAM noted that the United States still is down 650,000 factory jobs since February, wiping out manufacturing job gains since 2015. Meanwhile, the trade deficit for manufactured goods soared to a record $84 billion for just the month of August.

“There is widespread agreement across both parties and nationwide that investments in infrastructure are long overdue,” he noted. “Our infrastructure no longer is world class. In fact, neglect is eroding our economic competitiveness and quality of life.

“This plan couldn’t come at a better time,” he said. “We need jobs, and there is a growing consensus that our dependence on China and other nations for critical goods is dangerous, as this pandemic has shown.

“If the next president and Congress enact a bold industrial policy, the manufacturing jobs created will help restore the economy, bolster the middle class and reduce income inequities,” said Paul. “These are good jobs that tend to pay better and provide better benefits than other private-sector jobs that require some important skills but not necessarily a four-year college degree.

“Getting that policy right is now the biggest hurdle,” he said. “We have repeatedly tried a policy focused on tax cuts and deregulation. Unfortunately, those efforts have mostly backfired, coinciding with steep drops in manufacturing employment.”

To view the complete study, including state-by-state data, click here.

For more on the Alliance for American Manufacturing, click here.

The Alliance for American Manufacturing (AAM) is a nonprofit, nonpartisan partnership formed in 2007 by some of America’s leading manufacturers and the United Steelworkers. Our mission is to strengthen American manufacturing and create new private-sector jobs through smart public policies.

The Economic Policy Institute (EPI) is a nonprofit, nonpartisan think tank created in 1986 to include the needs of low- and middle-income workers in economic policy discussions. EPI believes every working person deserves a good job with fair pay, affordable health care, and retirement security. To achieve this goal, EPI conducts research and analysis on the economic status of working America. EPI proposes public policies that protect and improve the economic conditions of low- and middle-income workers and assesses policies with respect to how they affect those workers.