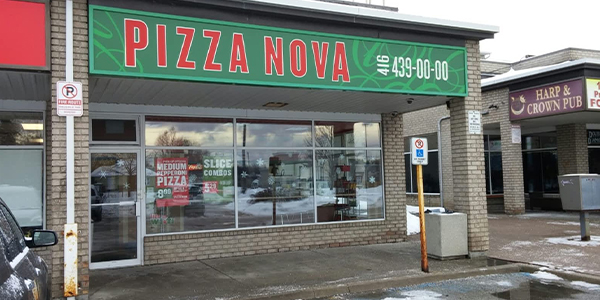 At Pizza Nova, one of Canada’s leading pizza chains, nothing is taken for granted, even when it’s something as seemingly simple as adding a new topping to its menu, as happened recently when it made plans to offer a grilled zucchini topping to its pizzas.

The one menu move ended up taking roughly a year and a half. Domenic Primucci, a member of the family that founded Pizza Nova more than four decades ago, and is now the company’s vice president, said that the first brand of zucchini that the chain looked into wasn’t good enough for Pizza Nova’s high standards, which is why the search ultimately took so long.

“When they started out,” said Primucci, referring to his father and uncles, “their motto was to make sure we use fresh ingredients. And whatever they’ve done to give out a high-quality product over the years was instilled within the company – regardless of whether it’s a new product or a topping that we add to the menu. That is our niche in the marketplace.”

That dedication to quality is shown in the unorthodox list of ingredients that Pizza Nova currently uses: vine-ripened tomatoes from California, zucchini and sun-dried tomatoes from Italy, flavorful Spanish onions, olives from Spain, real bacon strips, dough made with purified water, and enriched Canadian flour.

Pizza Nova’s customers of its more than 100 restaurants that are concentrated in southern Ontario are aware of the difference, and they appreciate it. Recently, the readers of a chain of newspapers in and around Toronto, the Toronto Sun, named Pizza Nova its Gold Choice Award Winner as the best pizza in the metropolitan area. Noted Primucci: “There are larger chains, but they voted us the best pizza in the area – that tells us a lot.”

There weren’t a lot of pizza restaurants in Toronto when Primucci’s father, Sam, opened the first one in 1963. “At that time, pizza delivery was still a new product to consumers in this area,” Primucci recalled. With a head start on some of its competition, Pizza Nova has grown steadily in size over the years.

Today, there are some 116 Pizza Nova restaurants in operation in southern Ontario, the majority owned by franchisees. Collectively, the restaurants, which generally offer both take-out and sit down service, serve more than three million pizzas annually, in addition to an array of other menu items such as salads and panzerotti, which is similar to a calzone but uses mozzarella cheese. Other offerings include chicken wings, lasagna, and even jumbo spicy green olives.

Recently, Pizza Nova just announced its first major push into a new region of Canada: the populous and competitive market of Quebec. Its first restaurant in the region was slated to open on Montreal’s West Island near the end of last year. The company said that its master franchisees for Québec, Rocco and Frank Marziliano, plan to open six to 10 new Pizza Nova locations over the next 12 months. In addition, Pizza Nova added six new restaurants in its core market of southern Ontario during 2006.

Primucci said that while the company is excited about its move into a second province, Pizza Nova sees tremendous opportunities for continued expansion in its backyard in Ontario, since suburban communities there continue to grow. “There’s a lot of new areas, and new homes, in southern Ontario, so there’s that market as well,” he said. He explained that by consolidating its strength in its core market, Pizza Nova can build on the success of its name recognition and continued marketing efforts in the populous region.

Indeed, the company’s most successful marketing push remains its radio ads, which are almost legendary across Ontario. The author of the catchy jingle, “”439-Oh-Oh-Oh-Oh-Pizza Nova,” which is also played over the company’s Internet site, has been profiled in local newspapers.

Indeed, company officials say that Pizza Nova’s centralized and highly efficient call center in Toronto is one more reason for the company’s success. Primucci said that of the 175 people who work directly for Pizza Nova, about 100 work in the company call center, operating a sophisticated computerized system that’s able to tell which franchise is the closest for delivery. The privately held company has a number of other critical functions located at company headquarters, including the commissary that works on identifying those unique ingredients.

Primucci said that while Pizza Nova takes all the essential steps to market itself, including not only that omnipresent radio jingle but also promotional flyers in its core market, it will never be one of those pizza chains that seeks to hook customers on the promise of a cheap deal, and little more. “We’re not a very gimmicky company,” he explained. “We market our brand.”

That is why the company insists on those long-term deals with high-quality suppliers of ingredients, even though in some instances Pizza Nova may end up paying a little more than the price it could find in the spot market. Primucci noted that the chain is particularly proud of its arrangement for procuring tomatoes, a key ingredient in its pizzas and some of its other dishes. He said the tomatoes are still picked and field-packed within six hours at a location in California.

“We’re a company that built our business on quality, and we depend a lot on suppliers to ensure the quality standards are high,” Primucci explained. “We don’t flip-flop with suppliers. I get calls every day from someone offering something like olives, who says, ‘I’ve got a great deal.’ And he is cheaper, but he’s only there that one time. We are loyal with our suppliers, and they know that.”

At the same time, Pizza Nova never loses sight of ever-changing customer trends. One reason that the company worked hard to get the perfect zucchini is the trend of many customers to move away from traditional red meat toppings like pepperoni and toward healthier toppings like mushrooms and other vegetables.

“A lot of people are watching their carb intake, and so they will order a thin-crust pizza,” Primucci added. In fact, Pizza Nova was slightly ahead of its time with a whole wheat crust in the early 1990s; the product was pulled back for a time but was recently reintroduced.

Pizza Nova has also updated its décor, to add some splashes of color to the traditional layout of its restaurants, which typically are about 1,500 square feet and have about 20-30 seats. It is a restaurant company that embraces change, but never loses sight of what made it so popular in the first place: Great pizza.