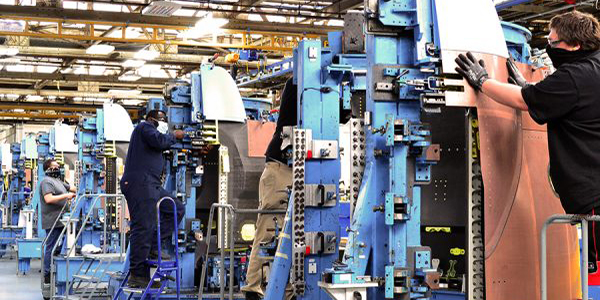 Middle River Aircraft Systems (MRAS) has an aviation pedigree dating back to the Wright brothers, but the company prefers to dwell on the future. MRAS is a hot shop with more than 100 engineers, Six Sigma and lean manufacturing processes, and significant new commercial and military contracts.

“History is important from a name-recognition standpoint – the China Clipper was built right here in this factory,” says President and General Manger Sagar Patel of the fabled transpacific flying boat. “We’ve always been innovators.” Today, the company is known for its technological edge in a competitive market in which customers, including aircraft manufacturers (airframers) demand lighter, quieter, more environmentally friendly and more reliable systems.

“Lighter aircraft use less fuel and fuel, of course, is very expensive. Using less fuel also means less impact to the environment. This is a big deal today and GE has a corporate wide initiative called Ecomagination to develop environmentally friendly products,” says Frank Dougherty, MRAS Director of Engineering & Technology. “Another major driver is making aircraft quieter, which is becoming increasingly important in Europe and parts of the world where airports are very close to major cities.” European airports have strict limits on the hours that larger aircraft can fly because of noise levels. Reducing noise can boost airline revenue by allowing them to fly into more airports during more hours. Because most of what we do goes around the engine, we’re constantly developing ways to dampen engine noise.” Everything we do is done with the consideration of shaving off weight for fuel efficiency and providing ways to reduce noise from the engine,” says Dougherty.

On the surface, the thrust of technology in the industry continues to be ‘lighter, more environmentally friendly, quieter, more reliable,’ but underneath is another constant: an affordable price tag. “With ongoing programs, customers expect to see savings year over year, so we have to continuously improve our processes and find ways to take out indirect costs,” says Dougherty. MRAS was an early adopter of tools like Lean and Six Sigma for process improvement, and these tools have a two-fold benefit. “As we improve our manufacturing processes we can increase our quality, but at the same time we’re taking out waste and increasing productivity, so there is obviously a savings that goes with it.”

A key competitive edge for MRAS is its experience in developing assemblies from composite materials – non-metal materials that are strong yet inherently light weight. Aerospace-grade composites require detailed laminate molding at high temperature and pressure to achieve high reinforcement volume fractions. But while composites have the advantage of high strength to weight ratios, they present additional challenges to manufacturers. Unlike metals, which are cut and shaped, composites are formed and then ‘baked,’ with the final product being rigid and inflexible. “Composites can be very unforgiving if your process is bad,” says Dougherty. “We made the investment years ago to develop our expertise in composites, which is really one of our advantages in today’s technology race.”

That competitive edge in composites led directly to a significant contract to produce the thrust reversers on the new Boeing 747-8, the larger, next generation of the workhorse aircraft. Although MRAS parent GE is producing the engine for the aircraft, Boeing gave MRAS the contract directly, a first for this type of award, which could total $1 billion dollars over the life of the program. MRAS is developing an all-composite thrust reverser that will complement the aircraft and engine’s lightweight, acoustically advanced systems. MRAS is a Boeing Silver-level Certified Supplier.

Chesapeake Bay
Like the child of a prominent family who makes a name for himself in his own right, MRAS has been able to distinguish itself from its corporate lineage. Although the company name is new it’s hard to forget that MRAS grew out of one of the most famous family trees in aviation. Seventy-five years ago, aviation pioneer and former Wright Brothers’ partner Glenn L. Martin, started the company in Maryland, which grew to become one of the nation’s biggest suppliers of aircraft during World War II.

The Martin 130, more famously known as the China Clipper flying boat, inaugurated commercial air flight across the Pacific and cemented Martin’s name in commercial aviation. That name stayed with the company over the decades and through key mergers, including Martin Marietta and, ultimately, today’s Lockheed Martin. In 1997 GE took over the business from Lockheed Martin and set up the company as a stand-alone entity, named for the town and Chesapeake Bay tributary along which it sits.

Today Middle River Aircraft Systems’ million-square-foot facility near Baltimore remains a nexus of aircraft production. The company’s approximately 1,000 employees work with the industry’s major airframers and engine producers to design, build and support the aerostructures that complement the aircraft. MRAS’ thrust reversers are like the breaks of the jet engines and are found on some of the most poplar engines produced by GE and Pratt & Whitney, the world’s largest aircraft engine makers. MRAS also produces a variety of specialized structures for major aircraft manufacturers including Lockheed Martin as well as Boeing.

Facilities include a full CNC machining shop, robotic route and trim equipment, complete painting and plating capabilities as well as full prototyping and testing labs. One of the hallmarks of the company’s operation is its extensive composite bonding resources. “We have a huge bonding facility with a lot of autoclaves – large high-pressure ovens – since we have to bake the material under pressure at tremendous temperatures,” DiMauro says. “Because we used to build entire aircraft here we have a lot of resources at our disposal including the large detail bonding area.”

MRAS also provides overhaul and repair services for aftermarket customers including nearly every major domestic commercial airline, along with many international airlines. Recently the company extended the reach of its service overseas, when it established an overhaul facility in U-tapao, Thailand, named MRAS Asia. This wholly-owned enterprise has been a very successful thanks to its OEM tools and designs, which allow companies operating Pacific Rim faster access to repair service.

Really Taking Off
Today, MRAS is focused on highly specialized needs of the industry, and not just the commercial sector. The company is also a go-to military contractor. For nearly a decade the company has been applying its expertise in thrust reversers to TF-39 engine, which powers the U.S. Air Force’s mammoth C-5 Galaxy aircraft. The gigantic cargo plane is one of the largest aircraft in the world, and MRAS not only maintained its current incarnation of thrust reversers, but is leading the team to develop the thrust reverser for the next generation of C-5 engine. In addition to thrust reversers, MRAS has made and serviced control surfaces, assemblies, stabilizers, radomes, wing tips, panels, access doors and ramps for a favorite of military aircraft, both airplanes and helicopters.

“Right now our business is growing. We’re seeing an increase in orders for some of the most popular wide body aircraft,” Patel reports. “That’s good for us, because we’re part of some very popular platforms and most admired aircraft engines in service, like GE’s CF6 and GEnx and Pratt & Whitney’s PW4168. But we there are also many changes taking place in our industry, and we’re working to be a part of them.

“We are not just making the same old stuff,” he adds about the company’s versatility and new directions. We’ve never just been a build-to-print, contract shop. We’ve always been innovators. It’s getting into our DNA, going all the way back to the founders of the company.”