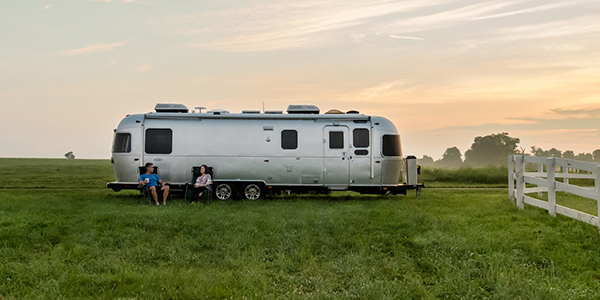 Its silver-bullet trailers may as well be red, white and blue because every American knows Airstream. Airstream trailers and motor homes have become part of the nation’s culture. More than a means of transportation, its recreational vehicles are truly a way of life.

“Our products are emblematic of freedom,” says Larry Huttle, Airstream’s president. “People are buying into a lifestyle with a distinctive, safe, reliable way to travel and see new places and have new experiences, not only in the U.S. but worldwide.”

The exterior design and interior amenities of Airstream’s trailers and motor homes bear more resemblance to airplanes or cruise ships than any land form of transportation. It’s no surprise that these lightweight, aerodynamic trailers were inspired by aircraft design.

From Idea to Icon
Airstream was born in 1931 when Stanford grad Wally Byam, a writer and publisher, founded the company to meet a growing demand for travel trailers. During World War II, Byam worked for Lockheed and Curtiss Wright, and later incorporated aluminum fabrication and aircraft construction methods into Airstream recreational vehicles to lessen wind resistance and to improve the strength-to-weight ratio of his trailers.

After the war, the company prospered as Americans took to the road. Airstream continued to flourish even after Byam’s death in 1962. In 1980, the company was acquired by Thor Industries, Inc., a holding company that has traded on the New York Stock Exchange under the THO symbol since 1986. As part of America’s highway tradition, the Airstream trailer can be found in the Smithsonian Institution and the Henry Ford Museum. An Airstream trailer was selected by NASA to house the first astronauts back from the moon, and Airstream motor homes continue to provide ground transportation for the space shuttle program.

The latest trend in the industry is toward superlight trailers and minimotor homes. In 2002, Airstream will introduce a 16-foot Bambi ultramodern trailer that can be towed by a moderate-sized sports-utility vehicle. “The roots of this industry began in the 1950s when the family car towed the trailer,” Huttle says. “The family car today is the sport utility, so we’re going after those vehicles that have the ability to tow 3,500 to 5,000 pounds, such as Jeep Cherokees and Explorers.”

Regardless of size, Airstream offers a home away from home. Among the standard and optional amenities the company offers are a complete kitchen with residential-grade refrigerator, range and microwave/convection oven; stainless-steel sinks, fine countertops and fixtures; a lavatory with fiberglass shower stall; a queen-sized bed; plentiful wardrobe space; television, sound systems, phone hookups and a computer table; comfortable dinettes and pantries; and even lounge chairs and a fireplace in some models.

Lasting Quality
Airstream’s reputation stems from superior, weatherproof construction, built from the outside in with the handcrafted furniture and interior appointments added last.

“Our vehicles are designed to have the body integrity before the inside materials go in,” Huttle explains. “Unlike our competitors, we build the shell and all the furniture that goes into those bodies.”

The quality construction comes from the experience and craftsmanship at work in its 175,000 square-foot Jackson Center, Ohio, plant, where the average seniority is more than 20 years and nine employees have been honing their skills for more than 45 years. Airstream has always known how to build lasting quality; more than half of the 100,000-plus vehicles it has made in its history are still on the road today.

A visit to its factory shows how those incomparable vehicles are built. Some materials and subassemblies, such as the chassis mainframe and engines by Workhorse or Ford, are produced off site and brought into the main Airstream manufacturing facility. There, the undercarriage work and underfloor plumbing and heat ductwork are completed. A rubber torsion suspension system optimizes handling and offers great ground clearance.

The company’s vehicles are distinguished by a monocoque (literally, “one shell”) design. This tubular, stressed skin shell is constructed with the body and chassis as one unit. “From an engineering/manufacturing standpoint, what’s really critical is that the body is designed to flex, just like an aircraft when the wings flex during stress and turbulence,” Huttle explains. “The body and subframe work together to dissipate the shock instead of transferring it.”

Airstream’s classic trailer shell is really five separate assemblies, including front- and rear-end assemblies, made of hydraulically pressed, stretch-formed aluminum. The assemblies are aircraft-riveted to form the famous shell, which is then integrated with a plywood floor. An insulated aluminum inside skin is also riveted in place, and electrical wiring is installed and given a high-voltage check. Extra components and tests ensure that thermal barriers keep the Airstream warm in the winter and cool in the summer.

Its laminated fiberglass motor homes are also engineered for efficiency and comfort, and are built by the same experienced workers with the same attention to quality construction as the aluminum body trailers.

“We have a culture of the learned skills,” Huttle says. “We’ve integrated those two production processes and have similarities and synergy where it counts.”

Cause “Celeb”
By now, you may have guessed that among Airstream’s loyal customers are Hollywood celebrities, who like to relax in cozy Airstream trailers after a grueling day on the set. Of course, you don’t have to be famous to own an Airstream, although you’ll turn a few heads no matter which of its eye-catching models you choose.

A lesser-known but more crucial line of work for the company is producing medical mobile units such as vehicles for hospitals, health-care organizations, the Red Cross and blood banks. These vehicles are built to the specifications of the health-care providers to bring preventive health care and other vital services to communities and people where needed.

As it turns out, health-care professionals are looking for the same things that Airstream customers have enjoyed for decades. “In the mobile medical field, people want a vehicle that has a reputation for reliability and durability,” Huttle says.