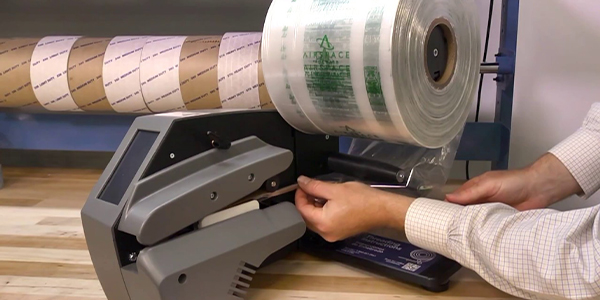 Polyair Inter Pack Inc., is practically bubbly about its various uses of bubble packaging and other industry-leading protective products. The Toronto-based company can safely package and ship anything from computer chips to a large sofa.In fact, the company’s Sealer 2000 is also called the Sofa Saver, because of the product’s ability to wrap and protect large pieces of furniture with bubble-type wrapping, on demand. It features a unique inner layer that delivers faster packing and allows the product to slide on the bubble during transit, significantly reducing damage from snagging with traditional wrap.

“It’s based on the size of product,” explained Lorne Herszkowicz, national end user accounts manager. “They press a button, it creates a pouch the size of the product that they’re going to pack and that’s it. You wrap the couch, put it in the truck and it’s good to go.

That’s just one of a number of new product innovations from Polyair in recent years. Another is the XPAK, which the company called The Ultimate Mailer because of the product’s lightness and toughness, which eliminates the need for small boxes or heavier mailers.

Started in swimming pools
The XPAK is used by clients like Jewelry Television, which ships out some 12,000 packages every day, most containing fine jewelry or gemstones in excess of $100 in value. Four years ago, the merchandiser turned to Polyair because of the firm’s speedy delivery of new packing supplies, as well as the ability to prevent damage and the possibility of theft.
“We’re a continuously innovating, entrepreneurial-driven company finding new applications and industries, and developing new products to meet their packaging needs,” Herszkowicz said. Today, the company services customers in publishing, parts distribution, cosmetics, drug and pharmacy, retail chains, mail order, fulfillment centers, computer accessories, medical devices, video, CD and DVD distribution and contract packaging.

Ironically, the company that became Polyair Inter Pack did not start out in packaging at all. In 1968, the current firm was started as Cantar Pool Products, a unit of the company that still exists today and makes aboveground pools, liners and other accessories. The company did not get involved in packaging until 1987.

Herszkowicz said that what sets Polyair apart is the company’s novel approach to the production process. “Basically, we pride ourselves on vertically integrating our whole manufacturing process, that’s what sets us above and beyond our competitors,” he explained. “Most of our products are manufactured using cast technology. Extrude, form the bubble and create the finished product all in one step.”

Polyair Inter Pack is now a publicly traded company on the American Stock Exchange, under the ticker symbol PPK. The company has close to 1,200 employees and, thanks to growth through both acquisition and organic means, is one of the top three in its industry group.

The company’s sales last year were in the area of $200 million even though like most businesses, Polyair had to deal with the consequences of higher energy and transportation costs, as well as an unfavorable currency situation in Canada. The firm sells its products through a network of more than 3,000 distributors across North America.

A pouch called Kangaroo
“We deal in a commodity based market, which is really being affected by high raw materials, oil prices, freight costs, labor costs,” Herszkowicz explained. “At the end of the day, if you’re trying to sell a highly competitive product in the market place, you’re going to be working on very slim margins and potentially go out of business.”

But that doesn’t seem to be an issue for Polyair right now. Instead, it continues to introduce new products that are tailored to the increasingly complex shipping needs of its customers.

Last year, Polyair announced two new innovative bubble pouch items designed to significantly drive down costs for its customers: the Kangaroo and Bubble Pouches On A Roll. The Kangaroo is the first compact automatic pouch machine that sits in the customer’s own facility. The user-friendly machine requires only standard Durabubble roll stock and loads in less than two minutes.

Polyair executives say that having to purchase regular bubble roll stock saves customers who use the Kangaroo system considerable dollars over pouches, and having the machine on-site allows them to produce custom pouch sizes without having to wait weeks for delivery.

The firm’s Bubble Pouches on a Roll innovation is also aimed at saving time that was once lost when packers fumbled around for each new pouch. This device contains up to 500 pouches rolled around a three-inch core, placed at eye level and able to release a single pouch every time one is needed.

“We try to focus on working in the end user environment with our distributive partners, of finding new ways to place their products, not necessarily using our standard stock cannibalized competitive products,” Herszkowicz said, “or showing them use of some of our products in a different way that will give them bottom line savings.” He said that Polyair built its business by building up its distribution network and working closely with its partners.

The company likes to emphasize that it offers a team-focused approach, reviewing every step of its customers’ packaging process and then designing a fully customized system that’s integrated with that client’s existing facilities and its objectives. “If they’re using small corrugated boxes, we’ll take a look at why they’re using small corrugated boxes and maybe they should be using a small envelope product that we manufacture,” Herszkowicz said. “Rather than using tape to close the box, and the amount of labor to put together the box and using a void fill product like bubble or peanuts, we’d go in there and recommend using a mailer product.”

He added, “The mailer product might be a little more expensive than the individual components of that box, but the overall cost savings of that solution or that idea will basically have a much better net impact on their bottom line than cost of the product.” That’s because customers usually save money on reduced labor, improved efficiency, and lower postage.

And that’s why economic bubbles might explode from time to time, but this maker of bubble packaging keeps growing bigger and bigger.