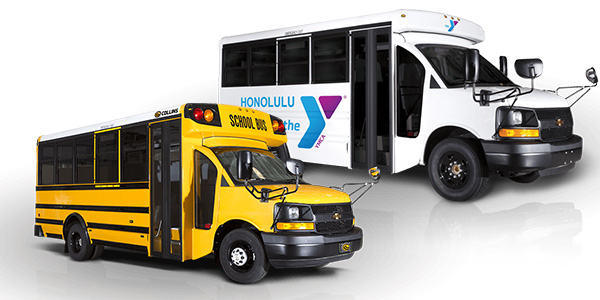 More than 30 years ago while working for a Kansas school bus dealer, Don Collins Sr., the founder and current chairman of Collins Industries, saw a definite need for a smaller school bus to solve the problems confronting small rural communities in his area. At the time, a typical 60-passenger school bus traveled anywhere from 40 to 60 miles transporting students to schools. It became clear to Collins that school districts needed solutions to reduce these lengthy routes and to add a greater degree of flexibility to their student transport strategy. As a result of his vision, the first small school bus was born. These small Type A buses accommodated 10 to 30 passengers and were under 10,000 GVW. Collins delivered his first Type A school bus in 1967 and the first Collins Industries company, Collins Bus, was formed. Today, the company supplies its school buses to school districts, childcare centers, contractors and Head Start programs.

It did not take long before Collins, “the father of the small-type school bus” as he became known, found another niche market in which to apply his innovative transportation solutions. Prior to 1968, in many small town and rural areas of the United States, mortuaries had taken over the responsibility of transporting people in need of immediate medical attention to hospitals. Mortuaries filled a pressing transportation need in rural areas as the closest hospital in some cases was more than 50 miles away and these, in turn, benefited from the associated business they were able to derive. Many mortuaries remained on 24-hour standby ready to transport the injured.

In 1968 the federal government passed wage and hour laws that prohibited businesses from making employees work more than 40 hours per week unless they were paid overtime. Mortuaries found they could not afford to pay employees for the extra time they were spending on standby ready to answer calls to transport people to hospitals. The new wage laws forced mortuaries to drop out of this line of business.

“At this point the federal government, under the Highway Safety Act, stepped in and provided funds to small towns for the purchase of ambulances,” notes Collins. “We saw a great opportunity to supply small towns with van-type ambulances. The Government Services Administration developed the initial specifications for the construction of ambulances in consultation with the private sector, including Collins Ambulance. The GSA bought from Collins Ambulance one of the first ambulances to roll off the company’s assembly line.”

The first ambulances were outfitted with only a first-aid kit and a fire extinguisher. Most ambulance drivers at this time weren’t even trained in emergency care. Today, the ambulances provided by Collins for hospitals, clinics and fire departments have very specific custom-made features. “Because ambulances have become providers of emergency-room type services, the company designs these vehicles with the knowledge that more and more life-saving equipment will be utilized,” explains Kent Tyler, Collins Industries’ vice-president of marketing.

“Today, we offer highly customized vehicles for the emergency transportation providers. These include private contractors, municipalities, hospitals and a growing number of fire departments,” adds Collins.

After the initial successes with Type A school buses and ambulances the company has never looked back. Today, Collins is the leading manufacturer of Type A school buses, ambulances, and sweeper trucks, and the second leading maker of terminal trucks. “Collins Industries’ corporate strategy is to be either the number one or the number two manufacturer in each of the markets where it participates,” says Tyler. “From the very beginning, Collins Industries’ goal has been to become the leading manufacturer of specialty vehicles in the United States. We have attempted to reach this goal by the development of new products internally and by the acquisition of companies that make complementary product lines. Today, Collins Industries operates seven vehicle companies.”

Some of the company’s most notable acquisitions include the following: the 1984 acquisition of Capacity of Texas, along with its Trailer Jockey product line of terminal trucks; the 1985 purchase of Wheeled Coach Industries, Inc., becoming in the process the world’s largest manufacturer of ambulances; the 1998 acquisition of Mid Bus, Inc., the second largest manufacturer of small school buses behind Collins Bus, and most recently, the purchase in 2000 of Waldon, the largest manufacturer of highway pavement sweepers in the United States. In addition to Collins Bus, Wheeled Coach, Capacity of Texas, Mid Bus and Waldon, Collins Industries also includes World Trans, a manufacturer of distinct commercial transit and shuttle bus products and Lay-Mor, a leader in road construction sweeper trucks and small loader backhoes for the rental industry.

In this market, the company’s 3-wheel sweeper has proven extremely popular.

Collins is well aware of his important role in the development of Type A school buses and ambulances in the 1960s, however, he is not someone who is content with dwelling on past achievements. He is excited to see the company move forward with the introduction of new products and product enhancements.

Wheeled Coach created the FireMedic Series from the ground up to meet and exceed the unique needs of rescue and EMS providers in the fire service. Each vehicle is engineered to deliver the maximum performance and longevity needed by first due responders. The Wheeled Coach FireMedic Series encompasses a wide variety of vehicles to satisfy the most exacting of demands. Each vehicle is built to the customer’s specifications and with a multitude of configuration combinations and customizable features.

“We continue to see fire departments becoming more involved in emergency first response. As such, they need a vehicle that’s able to transport patients. That’s why the company launched its FireMedic Series of vehicles. The FireMedic Series encompasses emergency response vehicles designed to satisfy the varying first response demands. Each unit is built to specific requirements with a multitude of configuration combinations and customizable features. They are highly complex units that are built to withstand the rigors of fire department use,” explains Tyler.

“We’ve also developed a new air filtration system. The Wheeled Coach patented P.A.F.(tm) (Pure Air Filtration. System) is a self-contained, three-filter system that removes dust, pollen, large particles and odors. It is the only system that exceeds government K-Specs air exchange regulations. Last year we started outfitting our ambulances with the new air filtration system. The system was created with the aim of preventing the spread of TB,” says Collins.

In the bus division, the company continues to develop innovative products designed to meet specific customer demands. It recently introduced a certified school bus designed to serve the van replacement market. With this product, the company is capitalizing on the nationwide movement to replace the use of vans to transport people, especially children. “The number of accidents involving vans has increased in the last couple of years. Vans used to transport people don’t offer much protection in case of an accident. They don’t have emergency exits, certified seats or side impact protection.The new Collins Activity Bus is meant to address what we see as a pressing safety need,” says Tyler.

This new bus offers customers a low profile school bus that drives like a van but is more spacious than a van. These new low profile school buses have proven to be popular with schools and childcare centers. The company also has a new unit out known as the “activity bus” that is versatile and specially made for the transport of athletic teams.

“We are seeing a growing, grass-roots movement from states to require entities transporting children, such as child care operators, to meet federal regulations for school buses,” remarks Collins. “If these entities are transporting more than 10 children, a typical van will not be able to be used. Our products meet or exceed federal guidelines and can replace van-type vehicles. There are currently 18 states that still allow vans to be used in transporting children. As you can well imagine, as the leader in small school production, this certainly represents a growth area for us.”

“We also expect significant growth in our export business,” says Collins. “Two of our product lines that offer the most export potential are our terminal trucks and ambulances. Today our terminal trucks are used in shipping ports all over the world. Our ambulances can be found in England, the Netherlands, and the Middle East. We also export to South America and Japan. We are truly a national and international company.”

Collins Industries is taking steps to modernize its manufacturing plants by adding new equipment. It places great emphasis on automation and mechanization. “We want to be the low cost producer of every type of vehicle we make,” explains Collins.

“Collins Industries has matured from being an entrepreneurial company to a company that is now professionally managed. We are excited about what the future holds for our company,” says Collins.

Collins Industries has set out on a goal to be the leading manufacturer of specialty vehicles in the United States. With professional management and the company’s commitment to quality products and customer service underpinning everything it does, this goal is very much within reach.