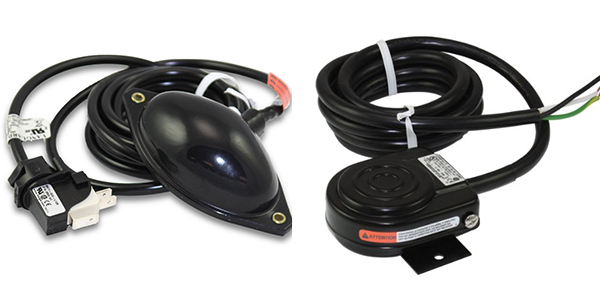 They are ubiquitous yet nearly invisible. Their place is on the floor, side-by-side with the machines that we use to run our lives – or to save our lives. They are used in applications ranging from medical to dental to industrial and beyond – even ultrasonic probing units used by brain surgeons. They’re also dominant on machines like golf carts, utility vehicles, scissor lifts, and a plethora of other applications.

Supplying the world with these vital systems is a small company called Linemaster, tucked away in bucolic Woodstock, Conn.; also known as the “Quiet Corner.” Linemaster leads the globe in the manufacture of foot switches and supplies literally hundreds of varieties for those whose livelihood depends on the foot switch’s ability to operate efficiently, reliably, and without interruption.

One of these areas, the medical field, has seen a boon recently, thanks to Linemaster’s continual reinvestment in research and development, which has led it into the field of wireless technology. “We have invested a great deal of time and capital in this technology and the payoff is now upon us,” notes Director of Sales & Marketing Joe Carlone, “The early innovators are companies in the medical, laser, and dental arenas. We have observed a tremendous interest in wireless foot controls for use in operating room applications.”

The IR Wireless Foot Switch eliminates the nuisance of wires under foot while invisible infrared light waves fill the room with 360 degrees of redundant signal. Line of sight is not required. Also, because it uses light rather than radio waves, it resists interference. The twin channel foot switch is available with up to five functions (single pedal version also available). The battery life of the unit is 200 hours at a 50 percent duty cycle; three AA batteries power the IP68 rated transmitter. “While all foot switches free the hands, the Linemaster IR System is so ingenious and so dependable, it will also free your mind,” the company attests in its promotional literature.

Explains Carlone, “There are several benefits to the wireless technology. It makes the cleaning of the switch simpler, because the connector and cord are now obsolete and the unit is fully submersible. In an operating room, where a lot of equipment is on carts with wheeled legs, it eliminates the hassle of negotiating around cords. It also gives the user freedom of placement. You can transfer control easily without worrying about the cord,” notes Carlone “Tripping over the cord is no longer an issue. Also, the number one failure mode for foot controls is related to the cord and connector. By removing these components, the number one failure mode is eliminated.”

The IR system recently was approved by the FDA, opening many opportunities for Linemaster and allowing the company to sell directly to hospitals. Because the company already works with 80 percent of OEM equipment manufacturers, it knows the systems well enough so that when a hospital manager calls for an update or upgrade, Linemaster can expertly offer a solution to match the specific need.

With medical applications growing quickly for the company and the steadiness of industry, Linemaster offers a portfolio of variations to suit many needs. Among the extensive lineup are single pedal, multi-pedal, explosion proof, and linear models.

Most of these switch variations can be manufactured to meet the requirements of IP68 (waterproof). An array of switches such as the Clipper, Hercules, Executive, Aquiline and Treadlite are quite diverse. Their exteriors are handsome enough to dress an operating room but also rugged enough to withstand the toughest conditions the industrial world has to offer.

A leader in the industrial world, the Hercules has lived up to its name. Second to none in durability, the rugged Hercules has been the face of industry for Linemaster since its introduction in 1956. The system is drip-tight, dust-tight, watertight and oil-tight; ideal for demanding applications. Available in multiple variations from unguarded to guarded, anti-trip and potentiometer (speed control); the Hercules fits many applications.

Rooted in the Depression
Such dynamics in innovation traces its roots back to The Depression. With a generous gift of $500 from his aunt, and a business machinery loan from the Reynolds Company in Providence, R.l., Albert Simonds incorporated the Simonds Machine Company in Southbridge, Mass., in 1937. He initially produced the Lensmaster optical machinery line to grind ophthalmic glass lenses of all sizes. As his business grew, he found a need for a good, reliable foot switch to operate his equipment allowing the operator to maintain hands-free capability at all times.

His first commercial foot switch sale, the Senior, was sold with Al’s optical machinery to a company called New Era in Chicago. Eyeing the footswitch on the machine, Simonds was asked to supply more of these products and Linemaster was launched into a business idea. World War II interrupted the growth of Lensmaster and delayed the development of Linemaster. When Al Simonds married Nancy B. Blakely in November 1951, they looked for a future home for Linemaster in the Woodstock area.

Through the years Linemaster acquired the components for the assembly operation from other small companies in the area. Led by the robust Hercules, an array of different designs and application specific switches were introduced to the public, including the Nautilus, Cadet, Clipper, Executive, Deluxe, and Treadlite models, to name a few. To this day, most switch brands remain active trademarks of Linemaster Switch Corporation. The product portfolio surpasses 300 different switch models, cord sets, and custom foot control solutions.

Al Simonds’ untimely death in 1966 left the company with a strong legacy that its employees have maintained. His wife became president and treasurer and carried on in the same manner until her retirement in 2002.

Joseph Carlone Sr. joined Linemaster as vice president/general manager in April 1996, bringing to the company his proven knowledge and experience in manufacturing. Among other companies, Carlone had worked at Stanley Works and ITT, where he oversaw the manufacture of connectors and various industrial products. What he saw at Linemaster was a company with great potential that needed a kick-start. “I’m a person who likes to develop processes and teach,” Carlone says. “What I saw here was a venerable company with a good product line that needed to come out of the Dark Ages.”

Carlone was named president in 1998, and purchased “America’s Foot Switch Leader,” Linemaster Switch Corporation, in June 2002. Today, the manufacturing facility has expanded to over 50,000 square feet. It produces over 300 standard catalog items featuring heavy, medium and light duty switches. These switches are found in industrial, medical and commercial based applications of all types worldwide.

Embracing the new
The changing needs of customers have brought Linemaster to new levels, embracing new technologies such as solid modeling design and stereo lithography. New models such as the Air Seal, Atlas, and Aquiline are examples of foot controls designed to meet stringent industry standards. In all, Linemaster produces models used worldwide in medical, industrial and commercial applications with turnkey custom variations and specialty products to meet various requirements. Many of its switches are UL, CSA, TUV certified, and CE Marked and all are produced with components made by manufacturers in the United States. The latest product innovation, the IR Wireless Foot Switch, is also FDA approved for sale directly to hospitals and medical clinics.

While it advances its markets, Linemaster confronts challenges, particularly those posed by foreign competition. “Fortunately we are the largest manufacturer of foot controls in the world,” remarks Carlone Sr. “We produced the first foot switch in 1937, and remain the foot switch of choice today in 2006. We have experienced double digit growth over the past 10 years and continue to see added growth through the evolution of medical products now complementing our flagship industrial products.”

Carlone Sr. continues, “The company’s employees are committed to continuous improvement and quality. They are hard working people that take pride in their workmanship. They enjoy their work and are proud to be part of an American manufacturing team. We deliver quality products and services on time, meeting or exceeding our customers’ requirements.”