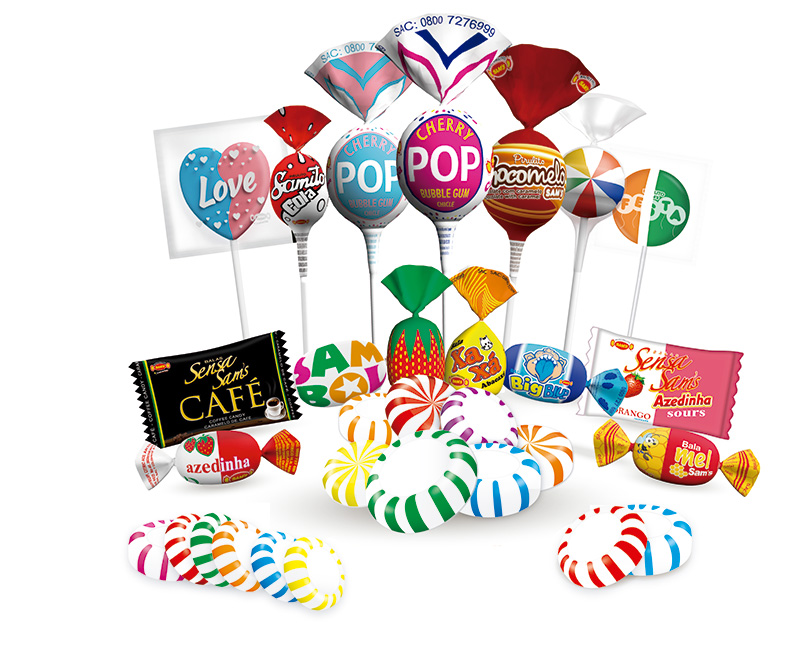 Brazil’s economic fortunes have always notoriously oscillated between cycles of boom and bust. For this reason, the country’s current long-term recession is nothing new to Simas; Brazil’s largest candy manufacturer has been in the sweet business for over 70 years. “Despite the current economic crisis, we still believe there are many business opportunities to to be developed in Brazil,” says the company’s director, Luiz Eduardo Simas.

From Rio Grande do Norte to the World

Based in the northeastern state of Rio Grande do Norte, the family-owned producer of top-selling caramels, dragées and lollipops has weathered plenty of financial storms since 1946 when two brothers, Orlando and José Gadelha Simas, purchased a small candy factory in the state capital of Natal. At the outset, the artisanal sweets that Simas sold were made and wrapped by hand. It was only a decade later that the brothers bought their first imported European machines and began producing candies on an industrial scale.

By the 1970s Simas – having moved into a much larger, modernized facility on the outskirts of Natal – had grown into the top candy manufacturer in the Brazilian Northeast and was preparing to expand throughout Brazil, and the world. In 1977, it was present at the first-ever Brazilian Export Fair in São Paulo, and then made a triumphant debut on the international stage in 1980 at ISM, the global confectionery industry’s largest annual trade fair, held in Cologne, Germany. At both events global buyers, impressed with the quality of Simas’ products, made a significant number of orders, launching the company on the path to a profitable export trade.

Simas’s newfound international success proved timely during the 1980s as Brazil weathered a decade of economic turmoil. Runaway inflation and escalating costs were accompanied by the opening of the fiercely protected Brazilian industries to foreign competitors. While many domestic manufacturers were unable to compete and went out of business, Simas doubled down on its already burgeoning overseas trade, investing heavily to bring its equipment, technology and packaging up to worldwide standards so it could compete in a demanding global marketplace.

The company also invested in new products. Since its modest beginnings, Simas had specialized in hard and chewy candies along with caramels and chewing gum. However, while attempting to entice international clients, it hit upon the inspired idea of producing lollipops.

Although the Brazilian market for lollipops was virtually non-existent in the 1980s, overseas demand was high, particularly in the United States, a market Simas was courting so assiduously that it built a plant dedicated exclusively to the production of lollipops. This courtship strategy paid off in more ways than one: Simas not only made important headway into the U.S. market, but also helped to jump-start domestic demand. As a result, today Simas is the Number One producer of lollipops in Brazil with a 30 percent share of the market.

Impressive sales figures aside, Simas has become undisputed lollipop king of Brazil through innovation, constantly developing new technology, processes and even new and never-before-licked types of lollipops. Notably, in the 1990s, it was the first in Brazil to produce lollipops with chewing gum in the center. The “Cherrypop” has since earned fame as Brazilians’ favorite lollipop.

Not content to rest on its lollipop laurels, in 2016, Simas entered into a strategic partnership with U.S.-based Original Gourmet to develop private label products. It went so far as to install a production line dedicated exclusively to Original Gourmet lollipops at its Rio Grande do Norte facility. Totally automated, this line is the first of its kind in South America to incorporate the hard candy depositing process. Equally pioneering is the Original Gourmet lollipop that Simas invented (and internationally patented). Its original formulation – involving the addition of cream – results in a lollipop whose unique texture and format is meant to appeal to adults as well as kids.

Packaging and marketing strategies are also distinctive. Says Simas: “Unlike other lollipops that are sold in bulk packages, the Original Gourmet lollipop is sold in single units. Not only will it be displayed with other individual confectionery items – such as KitKat and Snickers bars – but it will compete with them as well.”

So far, the Original Gourmet lollipop seems to be eating up the competition; Simas proudly points to the fact that it’s currently the top-selling single unit confectionery item among U.S. retail chains. The lollipop’s reign at the top of the confectionery pyramid augurs well as Original Gourmet and Simas jointly prepare for the product’s worldwide launch. While Original Gourmet will take care of distribution throughout the U.S. and Europe, Simas will focus on sales throughout South America and Africa, where it already has a strong presence.

A String of Strategic Partnerships

Simas’ teaming up with Original Gourmet is only the latest in a string of strategic partnerships with international, and primarily American, retail chains, dating back some 20 years. “In recent years, in particular, we’ve invested enormously in processes and equipment so that all of our production lines meet QA worldwide standards,” declares Simas. “These efforts have been essential to our landing contracts with major chains such as Walmart, Walgreens, Sam’s Club, CVS and Family Dollar, for each of whom we develop specific private label candies. As a result of such efforts, in the last three years alone, our exports have increased by over 50 percent.”

While the U.S. represents the most important overseas market for Simas – responsible for 35 percent of all exports – the company, already present in over 40 countries, is seeking to diversify even further. Its acquisition of international BRC, Haccp, Halal and Kosher certifications has allowed it to branch out into new food segments as well as untapped markets. Already present throughout the Americas, Europe, Africa and Oceania, Simas is gearing up to break into the lucrative Asian market – as early as 2019.

“Due to the partnerships we’ve developed, we can combine our sales strengths around the world with our strengths here and throughout South America,” says Simas. “As a consequence, we’re as well positioned to grow in markets that we’ve never explored as we are in those where we’re already a major force, including Brazil.”

Indeed, despite Brazil’s ongoing crises, Simas remains enthusiastic about opportunities on the home front, particularly since the domestic market continues to account for 80 percent of its total sales. Simas notes that Brazil’s candy market is less mature than those of North America and Europe, with per capita consumption that is 5 percent lower than in the Northern Hemisphere. Brazil has considerable room for growth, particularly in undeveloped and niche segments. Simas is particularly excited about the unexplored institutional market, already strong in the U.S., which is beginning to take off in Brazil.

“In the U.S., there is already a strong culture of offering candies at banks, restaurants and department stores, for example, which is starting to develop here,” explains Simas. “Because of our experience creating such institutional products for private labels in the States, we’re ideally situated to adapt some of those products – adding flavors and colors that are traditionally popular in Brazil – to the Brazilian market.”

Recently, the company experienced considerable success when it began producing Starlight, a top-selling hard candy in the U.S., under the name Festa Candy. The new name is more than apt in a country famed for its love of festas and festivities of all kinds. Candies geared specifically to festive events constitute a growing niche that Simas is not only betting on, but is exceptionally well positioned to exploit due to its partnership with Party City. North America’s largest retailer of party goods, Party City sells everything – including candies – that any party-giver or -goer could ever dream of, organized and displayed according to theme and color.

“Having developed products for Party City, we now plan to bring them to Brazil,” says Simas. “There are so many festas and commemorative dates here, but the confectionery industry has yet to offer people what they’re searching for at a competitive price.”

Like many of Simas’ winning strategies over the last 70 years, this latest endeavor promises to deliver sweet success. While political and economic crises will continue to wax and wane, ongoing demand for partying, on both a small and spectacular scale, is always a certainty in Brazil.